© 2022 Truthout
Who Pays for Agricultural Dumping? Farmers in Developing Countries

Brazil and the United States may have settled, for now, their long-running WTO dispute over U.S. cotton subsidies, but the issues it raised remain. After all, Brazilian producers were not the only ones hurt by U.S. dumping of its highly subsidized cotton on world markets, which not only took market share from competing producers, it depressed the international price for all producers.

How much does agricultural dumping cost farmers in developing countries? I recently completed a study for a Woodrow Wilson Center project that highlights just how high the cost of dumping can be. I benefited from the somewhat controlled experiment represented by U.S.-Mexico agricultural trade under the North American Free Trade Agreement (NAFTA). I call it a controlled experiment because NAFTA liberalized agricultural trade dramatically over a short period of time, Mexico imports most basic grains and meats almost exclusively from the United States, and Mexican farmers grow many of the crops that compete with the imports. In such a case, one can easily see the increase in U.S. exports, the drop in Mexican producer prices, and it is reasonable to assume that the U.S. export price is the reference price for these products in Mexico.

Using one of the definitions of dumping listed by the WTO (GATT Article VI Sec. 2.2), we estimated the extent to which U.S. export prices to Mexico were below U.S. farmer costs of production (plus transportation and handling). We looked at the nine-year period 1997-2005. We began in 1997 because NAFTA’s agricultural provisions were mostly implemented and the 1996 U.S. Farm Bill, which had a price-depressing effect on most major crops, had taken effect. We ended the period in 2005 to avoid the confounding effects of the speculative commodity price boom, which began in late 2006. We simply calculated the extent to which Mexican producer prices were lowered by U.S. dumping, and then estimated how much more Mexican producers would have earned if they had received non-dumping prices – at least high enough to cover U.S. costs of production.

As the table shows, Mexico was indeed flooded with imports, they were exported by the United States at prices below production costs, Mexican prices fell dramatically, and production declined in many cases. 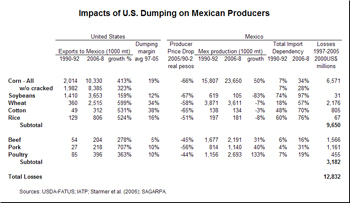 The eight products studied all saw significant growth in U.S. exports, from the 159% increase in soybean exports to the 707% increase in pork exports. All eight products showed positive dumping margins – 5-10% for the meats, 17-38% for the crops. For all eight products, real producer prices in Mexico fell dramatically, with real 2005 prices 44%-67% lower than their levels in the early 1990s. Mexican production fell for all the crops except corn, and rose significantly for meats, reflecting the rising demand for meat-based protein in the Mexican diet. Import dependency increased dramatically for all products.

What was the cost to Mexican producers of these dumping-level prices? We estimated the nine-year cost at $12.8 billion (in 2000 US$), $1.4 billion per year. To put these numbers in context, the annual losses are more than 10% of the value of all Mexican agricultural exports to the United States (including beer, which Mexico, oddly, classifies as its most important agricultural export). The losses from U.S. dumping surpass the total value of Mexico’s annual tomato exports to the United States, widely touted as Mexico’s biggest NAFTA success story in agriculture.

Not surprisingly, corn farmers suffered the highest losses. U.S. exports increased 413%, arrived at prices 19% below production costs, and real producer prices in Mexico declined 66%. We estimated losses to Mexican corn farmers of $6.6 billion over the nine-year period, over $700 million per year. These losses amount to $99/hectare per year, a crushing blow to struggling smallholders.

Given how sluggishly the Mexican economy has performed under NAFTA, these are also crushing losses for Mexico. An estimated 2.3 million people have left agriculture in a country desperate for livelihoods. (See our report, “Rethinking Trade Policy for Development.”) And food dependency has risen dramatically (see graph), which cost Mexico dearly when commodity prices spiked in 2006-8. 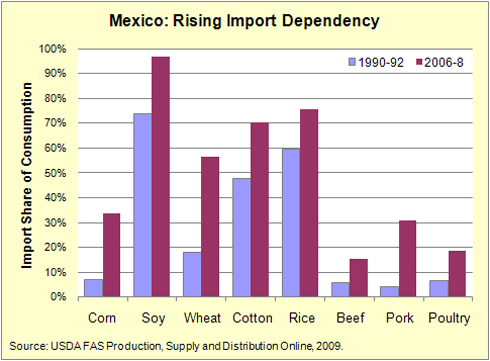 Mexico certainly serves as a warning to developing countries considering agricultural trade liberalization. The case also highlights the weakness of international rules for defining and disciplining agricultural dumping. That weakness, and the vulnerability of developing-country farmers to import surges, makes all the more reasonable developing-country demands in the stalled Doha Round negotiations for strong Special Product measures to protect key food crops and effective Special Safeguard Measures to protect against import surges.

Until agricultural dumping can be disciplined effectively, developing countries must retain the policy space to defend themselves. Mexico gave up most of its defenses under NAFTA. Farmers are paying a high price.

“Agricultural Dumping Under NAFTA” is available online. The Woodrow Wilson Center report, “Subsidizing Inequality,” will be released in Fall 2010.

Timothy A. Wise is Director of the Research and Policy Program at the Global Development and Environment Institute, Tufts University, and leads its Globalization and Sustainable Development Program. With a background in international development, he specializes in agricultural policy and rural development. He is involved in ongoing research in the areas of: Sustainable Rural Development, Beyond Agricultural Subsidies, Mexico Under NAFTA, WTO and Global Trade. He is the co-author of the book (in English and Spanish), Confronting Globalization: Economic Integration and Popular Resistance in Mexico, and The Promise and the Perils of Agricultural Trade Liberalization: Lessons from Latin America. He is the former executive director of Grassroots International, a Boston-based international aid organization. He holds a Masters in Public Policy from Tufts’ Urban and Environmental Policy and Planning Department.