The establishment survey showed the economy created just 113,000 jobs in January. Coupled with the 75,000 increase reported for December, this is the weakest two-month stretch since December, 2010-January 2011. However, the picture in the household survey was much better, with the employment-to-population (EPOP) ratio rising by 0.2 percentage points from 58.6 percent to 58.8 percent. This matches the previous high for the recovery in October of 2012. The unemployment rate edged down to 6.6 percent. 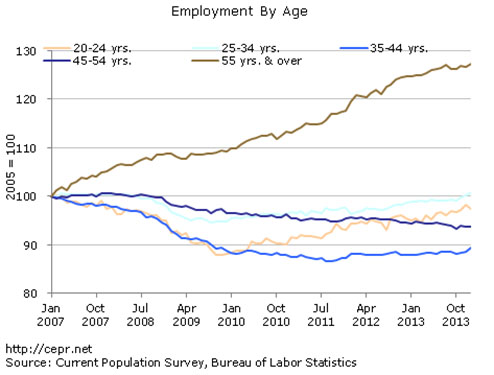 The share of long-term unemployed fell sharply to 35.8 percent, the lowest since August of 2009. However this is likely due primarily to people dropping out of the labor force as their unemployment benefits expired. One clear negative in the household data is a drop in the percentage of unemployment due to people voluntarily quitting their job from 8.2 percent to 7.9 percent. The share of unemployment attributable to job leavers is still lower than the low-point for the prior two recessions.

In addition to the overall weakness, the numbers in the establishment survey were unusual because the goods-producing industries accounted for the bulk of job growth, accounting for 76,000 jobs. Construction gained 48,000 jobs following a decline of 22,000 in December. Manufacturing added 21,000 jobs. Both sectors will likely to continue to add jobs throughout 2014, but at slower pace.

Some of the weakness in the service sector likely just reflected seasonal factors. Specifically, retail showed a loss of 12,900 jobs after adding 126,900 in the prior three months. The January falloff likely reflects more than usual holiday hiring. There was a jump of 10,100 jobs for couriers reported in January. This will almost certainly be reversed next month.

A drop of 400 jobs in health care, following a gain of just 2,400 reported for December, gives the weakest two-month growth in the sector for the length of the series. Job growth in hospitals has been especially weak, falling in both months. Weaker job growth in this sector will be a likely outcome of efforts to contain costs.

In spite of the positive news in the household survey, this report coupled with weak numbers on construction and durable goods orders, raises concerns about the strength of the economy going forward. Many observers have attributed the weakness in recent data to weather. This is not plausible since the weather has not been especially bad for winter in the Northeast and Midwest. While future jobs reports are likely to show more growth than we saw in December and January, it is likely the figures will be closer to 150,000 than 200,000.