The headline unemployment rate fell sharply to 6.7 percent in December. The drop of 0.3 percentage points was almost entirely due to people leaving the labor force as the number of people reported employed in December only rose by 143,000. This was just enough to keep the employment-to-population ratio constant. The establishment survey was also surprisingly weak, showing a gain of just 74,000 jobs. In addition, the length of the average workweek fell by 0.1 hour leading to a decline of 0.3 percent in the index of weekly hours for the month. 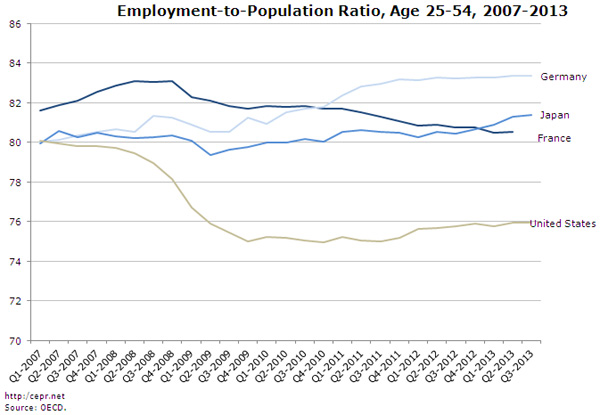 The mix of job gainers by age shows a somewhat different story than earlier in the downturn. While older workers had previously accounted for the bulk of employment growth, this has not been true in the last year. Teens and workers between the ages of 20-24 accounted for 35.6 percent of the employment growth in the last year, compared to 33.4 percent for workers over age 55. Workers between the ages of 45-54 fared worst, seeing a drop in employment of 284,000 over the year.

The establishment data was far weaker than had generally been expected. Not only was the 74,000 jobs number far lower than expected, it was heavily concentrated in retail which accounted for 55,300 new jobs. Some of the job losses posted in other sectors were clearly anomalies. For example, the accounting industry reportedly lost 24,700 jobs in December, while the motion picture industry lost 13,700. These are erratic movements that will likely be partially reversed in future months.

The government sector shed 13,000 with a loss of 14,900 jobs in local education the main culprit. (This is likely a seasonal adjustment issue.) The temp sector added 40,000 jobs. Unfortunately this cannot be taken as a harbinger of future employment growth. It added 47,000 jobs in February of 2012, just as the economy was about to hit a spring job slump.

The drop in hours is ominous, although one month’s data should also be considered with caution. With an upward revision to last month’s data, job growth for the last three months has averaged a respectable 172,000.

Wage growth continues to be weak. The average hourly wage increased at a 1.68 percent annual rate over the last quarter, down very slightly from a 1.77 percent rate over the last year. Workers’ wages are at best just keeping pace with inflation.

This report should be viewed as a corrective to some of the excessive optimism in recent assessments of the economy. Much of the apparent weakness in December job growth is a direct result of the stronger than expected growth seen in the prior two months. The economy is likely to continue to add jobs at a pace consistent with a slow decline in the unemployment rate. However, the bigger factor pushing down unemployment is likely to be people leaving the labor force as their benefits expire. Unemployment Falls Below 8.0 Percent for the First Time Since January 2009

Upward revisions bring the monthly rate of job growth to almost 150,000 since June.