By contrast, the household survey showed the unemployment rate edging up to 7.3 percent. More importantly, the employment-to-population ratio (EPOP) dropped 0.3 percentage points to 58.3 percent, as more than 700,000 workers reported leaving the labor force. This is just above the 58.2 percent low for the downturn reached in July of 2011. Most of the reason for the deterioration in the picture in the household survey was the government shutdown, with the number of people reporting that they were unemployed due to temporary layoffs rising by 448,000. However, even if all these workers are added to the employed, the EPOP would have edged down to 58.5 percent, as there still would have been a decline of 250,000 in the size of the labor force.

The job growth reported for October in the establishment survey together with the upward revisions for the prior two months brought the three month average to 205,000. The gains were broadly spread across sectors. Especially noteworthy was a 19,000 increase in manufacturing employment, the largest gain in the sector since an increase of 23,000 in February.

Retail showed an unusually large gain of 44,400. This could reflect an earlier start to the holiday shopping season that is not yet fully picked up in seasonal adjustments. The retail sector reportedly added 52,100 jobs last October. The professional and business services category added 44,000 jobs. Surprisingly, employment services accounted for only 5,400 new jobs. Insofar as temporary employment is a signal of future hiring this is bad news, but it means the jobs workers are getting in the sector are permanent ones.

Health care added 15,000 jobs, a bit less than its 19,000 average over the last year. The government sector continued to shed jobs, with a loss of 12,000 jobs at the federal level and 3,000 at the local level partially offset by a gain of 7,000 at the state level. Perhaps the biggest surprise was the increase of 53,000 jobs in the leisure and hospitality category. This sector might have been expected to take a hit from the closing of national parks and other government-run tourist destinations. That doesn’t seem to have been the case.

Wage growth continues on roughly the same track, with the average hourly wage increasing at a 1.8 percent annual rate over the last three months. Interestingly, wages rose at a slightly faster 2.1 percent rate for production and non-supervisory workers continuing a pattern seen throughout this cycle. Since this category accounts for more than 80 percent of the workforce, it implies that generally more educated supervisory workers are seeing notably smaller wage gains. 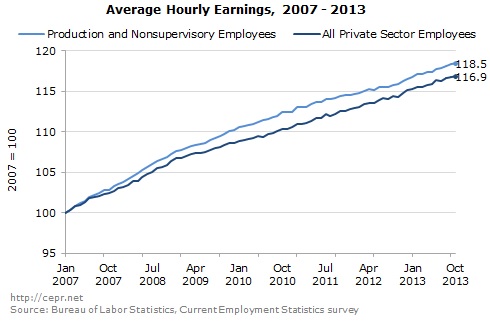 While most of the bad news in the household survey is likely attributable to the shutdown there are some items worth noting. In particular there was a sharp drop in the percentage of unemployment due to people voluntarily leaving their jobs. This fell to 7.5 percent, the lowest since April. This likely reflects uncertainty created by the shutdown, but it would be a bad sign if it doesn’t bounce back in November.

By age group, the 45-54 year-olds were the big job losers with a drop in employment of 274,000. Women accounted for 161,000 of this drop, a decline of more than 1.0 percent from September. This is likely an artifact of the shutdown, but striking nonetheless.

Clearly most of the bad news in the household survey is attributable to the shutdown with hundreds of thousands of government employees showing up as unemployed. However even accounting for the shutdown the picture is not bright. Private employment is down from its levels of three months ago and only 1.3 million above year ago levels. When the two surveys diverge, the establishment survey usually turns out to be the one closer to the underlying reality. It will be very bad news if that is not the case here. Weak productivity growth has supported the job growth of the last two years. Men have gotten all new jobs in retail over the last 2.5 years.