An activist addresses the crowd at #ShutDownCityHallNYC on August 1, 2016. (Photo: WNV / Ashoka Jegroo)

Activists in New York City seeking to defund the police have successfully occupied City Hall Park for a week and seen one of their demands met with the resignation of Commissioner Bill Bratton. While blocking roads and highways has been the tactic of choice for Black Lives Matter since it gained national attention two years ago, the recent deaths of Alton Sterling and Philando Castile have sparked the resurgence of a tactic many thought had been left behind in Zuccotti Park.

Occupations against systemic racism and state violence started in Los Angeles, made their way to Chicago eight days later, and then ended up in New York City after another 12 days. But will these occupations end the same way the Occupy Wall Street protests ended? Does the adoption of this well-worn tactic represent an advancement for the movement, or does it illustrate the need for newer, more disruptive tactics?

The first of the recent occupations began on July 12 in Los Angeles when the city’s police commission ruled that the LAPD officers who killed 30-year-old Redel Jones last year on August 12 had acted in accordance with the LAPD’s deadly force policy. The LAPD claimed that Jones was a suspect in a robbery and that she had moved toward an officer with a knife in her hand when they shot her. But at least one witness said that Jones had not charged at officers and was, in fact, running from cops when the shots rang out.

Protesters in Los Angeles tried to enter City Hall on July 12, but were stopped by police. “Initially, when we came down to meet with the mayor, we were met with severe brutalization,” said Melina Abdullah, a professor at California State University in Los Angeles and co-founder of Black Lives Matter LA. “We attempted to go up to the mayor’s office. We were stopped by police officers who pulled their billy clubs on us. I was personally wrestled to the ground, slammed on the stairs and handcuffed. We were detained for quite some time.” Protesters then promised to occupy City Hall until their five demands were met, including the firing of LAPD Chief Charlie Beck and reparations for the victims of police brutality.

On July 15, Los Angeles Mayor Eric Garcetti offered to meet privately with a “delegation” of the protesters, but was turned down. Instead, the protesters demanded that the mayor come out in public and meet with all of them, which he declined to do. This prohibition against private meetings with politicians would also later be adopted by the Chicago and New York occupations as well. The next day, the protesters decided to change the name of the occupation from #OccupyLACityHall to #DecolonizeLACityHall since the “police and government structures that employ them are the occupiers.”

So far, the occupation has been going on for nearly a month, and the protesters don’t look like they’ll be compromising with the mayor on their demands. “Until he fires Beck, he’s going to be occupied,” Abdullah said.

Chicago’s occupation came next. On July 20, activists staged a march and chained themselves to the entrance of the Chicago Police Department’s infamous black site at Homan Square — where, according to reports, Chicago police have taken people to be interrogated without any legal representation for almost 20 years. Activists then set up an occupation at a vacant lot across the street from Homan Square and dubbed it “Freedom Square.” The activists stated that the occupation would continue until a proposed “Blue Lives Matter” law is rejected by the local legislature. The law, modeled after a similar law passed in Louisiana earlier this year, would protect cops under hate crimes legislation and would make it easier for police to charge protesters with a hate crime for getting into altercations with the police.

“They can charge people responding or people protecting themselves [with] hate crimes,” Damon Williams of the Black Youth Project said. “They have that extra power to criminalize and charge someone with a felony … We know that the police engage with protesting in a militaristic fashion and things could escalate.”

Along with being a spot where activists can engage the community and spread their message, it soon turned into a mini-village and community resource hub modeled on the new world the activists wish to create. Activists organized an outdoor kitchen, an arts and crafts section, a library, sleeping areas, a medical center, and an assortment of other resources. “We are showing love in action,” said Let Us Breathe Collective co-director Kristiana Colon. “We mean for Freedom Square to be a visual representation of our belief in love and freedom. We want to show the North Lawndale community that we love them.”

Then, starting on August 1, activists in New York City, inspired by their comrades in Los Angeles, took over the park right next to City Hall. The occupation was named #ShutDownCityHallNYC, and the organizers explicitly advocated for the police to be abolished. They would also later, on August 4, go on to express solidarity with the #DecolonizeLACityHall and #FreedomSquare actions.

“Before we called this action, LA had already begun their action decolonizing LA City Hall. That was definitely an inspiration for us,” said Nabil Hassein of Millions March NYC. “We put out our call before Chicago’s Freedom Square, but we’ve definitely been watching what they’re doing and that’s also been a great inspiration for us. They’re doing great work pointing towards abolition.”

Much like their comrades in Los Angeles, Millions March NYC, and all the other activist groups involved, issued demands with the first being the firing of NYPD Commissioner Bill Bratton and an end to the “broken windows” policing that he championed. Broken windows, a form of quality-of-life policing that encourages cops to harshly crack down on petty offenses in order to prevent larger crimes, has long been criticized as merely a way to criminalize marginalized groups, particularly communities of color. Also like #DecolonizeLACityHall, #ShutDownCityHallNYC demanded reparations for victims of police brutality. 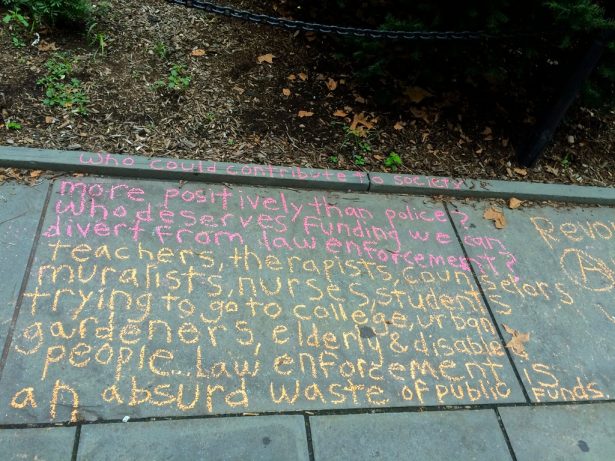 The other demand of #ShutDownCityHallNYC is shared by all three occupations: defunding the police and the reinvestment of those resources into black and brown communities. Rather than spending millions of dollars on police, all three occupations want those resources spent on providing physical and mental health care, education, housing and other necessities to marginalized communities.

And despite the threat of the NYPD or their supporters possibly attempting to forcefully end the occupation, the activists say they’re willing to keep #ShutDownCityHallNYC going for as long as it takes.

“We’re prepared to hold the space,” Vienna Rye, an organizer with Millions March NYC, said. “Obviously, the NYPD is a violent institution, and they will very likely bring violence to this camp. And that’s something we’re prepared for. That’s also why we’re out here fighting. Because their violence is not just because of this action. The NYPD is violent everywhere every single day regardless of how we’re organizing.”

Thanks to a nearby 24-hour, privately-owned public space, the NYPD wasn’t able to arrest #ShutDownCityHallNYC protesters once City Hall Park closed at midnight, and the occupation made it past its first night. Then, to their surprise, they awoke to part of their first demand being met. After one day of #ShutDownCityHallNYC, Bratton announced that he would be resigning by September after previously hinting at remaining until 2018. Despite Mayor Bill de Blasio denying that the protests had anything to do with the move, it further invigorated the protesters who renamed City Hall Park “Abolition Square” and set-up a variety of workshops and activities for people to do. Much like Freedom Square in Chicago, it has become a center for abolitionists around the city to meet, talk, learn, eat, sleep, organize and hopefully realize the new world they are working to build.

And this is part of why all three cities have embraced occupations as a tactic. While it may not be as novel and disruptive as blocking highways seemed in 2014, this tactic represents both a strategic advancement in the movement and serves as a stationary space for activists to network, brainstorm, discover and organize how to take the movement even further.

Ashoka Jegroo is a journalist born and raised in Brooklyn, New York. He has bylines in The Santiago Times and the New York Times’ The Local blog. He has covered protests in Santiago, Chile and New York City. When he’s not causing trouble for the establishment, he’s live-tweeting protests. Follow him on Twitter: @AshAgony.