After falling by almost 1.4 million workers between 2008 and 2010, union membership hit a plateau in 2011. The total number of union members (up about 49,000) and the share of workers in a union (down 0.1 percentage points) were essentially unchanged last year.

In the public sector, the total number of union members declined 61,000, as squeezed federal, state, and local governments cut back employment. Union density (the share of the workforce that is a member of a union) in the public sector, however, increased 0.8 percentage points, to 37.0 percent. Density increased even as the number of union members dropped because overall employment in the sector declined more rapidly than union membership.

Meanwhile, in the private sector, union membership increased by about 110,000, with union density holding steady at 6.9 percent. Density remained unchanged between 2010 and 2011 because union employment increased at the same pace in 2011 as overall employment in the sector.

Overall, union density ticked down 0.1 percentage points, however, because employment shifted away from the more heavily unionized public sector and toward the less-heavily unionized private sector. For the third year in a row, public-sector workers made up a slight majority (51.2 percent) of all union workers. 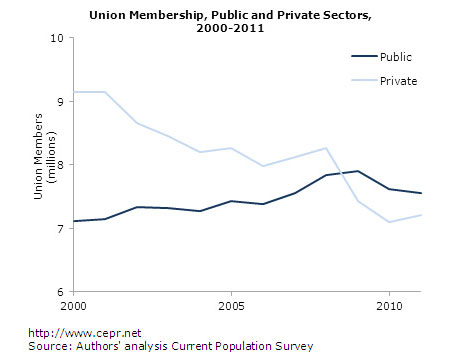 The three broad industry categories with the largest net increases were health care and social assistance (up 101,000), construction (up 73,000), and durable manufactured goods (up 36,000). Professional and business services (down 65,000), utilities (down 36,000), and nondurable manufactured goods (down 31,000) were the industries with the biggest losses of union members. 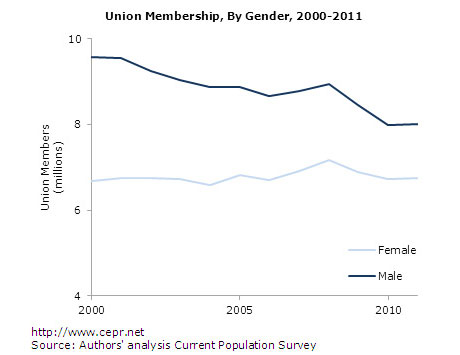 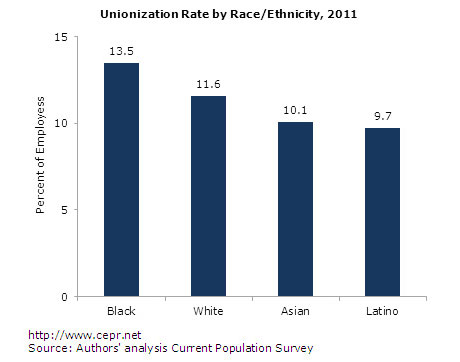 Janelle Jones is a research assistant at the Center for Economic and Policy Research in Washington, DC.