Truthout contributor Richard Lichtman was away at summer camp when the United States dropped the bomb on Hiroshima. His poem exploring his memories from that day brings the enormous violence of August 6, 1945, to a revealing focal point: the thoughts and emotions of a 14-year-old boy trying to make sense of the celebration and grief unfolding around him.

I believe it was a Tuesday, that day in August;
In summer camp all days tend to run together
Except for Saturday night, when there were movies,
Or Friday night and Saturday morning
When there were religious services:

Hear, O Israel: the Lord our God
The Lord is one.
You shall love the Lord your God
With all your soul and with all your might.
And these words that I command you today
Shall be on your heart
You shall teach them diligently to your children,
And shall talk of them when you sit in your house
And when you walk by the way,
And when you lie down
And when you rise
You shall bind them as a sign on your hand
And they shall be as frontlets between your eyes
You shall write them on the doorposts
Of your house and on your gates.

Strange how deeply these words settled themselves in me
And how readily I recall them still.
Of course, you can rightly say that at 14 one remembers
Yes, that’s true; but there is so much I do not remember of those days
Even filled as they were with repetition.

This day began like the others
Assembly around the flag, announcements, breakfast
And then we cleaned our bunks and made our beds
And ran to baseball, or basketball, or swimming,
Depending on the day.
And so it went in the afternoon.
More sports and swimming, and on it went
One day much like the rest but slightly different.

And yet this became the day I have never forgotten.
For sometime late in the afternoon the voice of
The head counselor came over the PA system.
His voice, as I remember it.
Was both somber and elated.

Today, he said, we had bombed Japan with the most powerful weapon
The world had ever seen.
It was said that almost 100,000 people died and more were surely to die
in the coming days.
The war would soon end he said
For nothing could withstand the power of this “atomic bomb,”
More destructive than any weapon ever, and we would right the wrong
That had been done us at Pearl Harbor.
A cry went up like the one I heard when Louis knocked out Schmeling
In their second fight in New York
And I was at my grandma’s and grandpa’s house in the Bronx
And everything turned to sound and my father looked so happy
Not because he liked Negroes so much,
But because Schmeling was a German and a favorite of Hitler’s
And an anti-Semite, and that was enough for my dad.
In time I was to hear something like it when Lavagetto hit the double
Off the scoreboard to break up Bill Bevins’ no hitter
And Brooklyn erupted in a single, glorious cry of ecstatic triumph
and I can still hear the voice of Red Barber, and that was wonderful
And still floats above my world from time to time and time to come.

But this was different
All my friends and everyone seemed excited and happier
than I had ever seen so large a group.
People ran about wildly and I had the strange feeling
that there was something pretended about it all.
They seemed to look to each other for instructions as to what to do, or how to appear,
or even, how to feel.

But Lennie was different
He sat on his bed with his head in his hands;
There was not a glimmer of joy on his face.
And I sat down too and looked at him.
Not only because he was so different from the others,
But because I liked him best of all the counselors at camp.
And looking back, now, I think it would be true to say I loved him.
He had a sense about him of right and wrong, of someone who knew the difference
and cared about it.
And sometimes we would talk
and he would say things I did not really understand
But which seemed very important and which made me want to be like him
And be liked by him.
The time I came back late from swimming and I was supposed to be cleaning the bunk,
And he looked at me and did not say anything, and I was sorry for what I did
And never did it again.

“Do you understand what happened out there today?” he asked,
And I repeated that we had bombed the Japs with a powerful bomb and we would win the war, now, so much sooner,
So everyone seemed to be saying.
“And what else?” he asked.
I said I did not know.
“Well, we killed a lot of Japs.” He emphasized the word for some reason,
“Yes,” “75,000; wasn’t that what Sam said?”
“But that was because they had attacked us and killed our soldiers
and started a war.”
“yes,” he said, “but do you think the people who died in their houses and schools and hospitals were the ones who attacked us?”
I did not know how to answer.
“They were all Japs weren’t they, like we were all Americans?”
He looked at me very quietly, very sadly,
And I began to feel the way I did that day when I came back late from swimming.
But I did not know why I felt that way
Because I did not do anything wrong
And yet, I felt as though I had
And I just went off to be by myself
And never brought the subject up again
Even when we bombed them again a few days later. 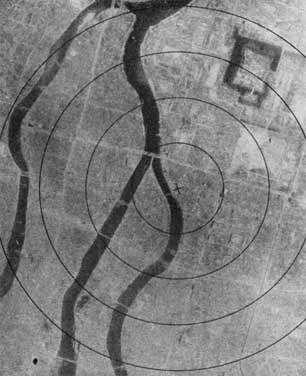 Hiroshima after bombing. Area around ground zero. 1,000 foot circles. (Photo: ibiblio.org)And even now, though I think I understand,
There is something between Lennie and me and I don’t know what it is.
But I do know that it was very important
And I would not have become what I am without that time between us.
And I love him and wish we could talk again and he could explain to me,
What happened that day we dropped the bomb on Hiroshima.

Share
Copyright, Truthout. May not be reprinted without permission.
Richard Lichtman

Richard Lichtman is a philosopher who specializes in the relationship between the social and psychological dimensions of human life. His approach is broadly interdisciplinary: he has taught in departments of philosophy (University of California, Berkeley), humanities (San Francisco State University), sociology (University of California, Santa Cruz) and psychology (The Wright Institute, California School of Professional Psychology, etc.) and has been a faculty member of the Council on Educational Development (CED) program at the University of California, Los Angeles. His books also indicate the range of his interests: Essays in Critical Social Theory covers a broad range of topics in economic, social, and political theory, while The Production of Desire is a detailed analysis of the works of Marx and Freud.