© 2022 Truthout
The Last Iceberg: Nature Sculpts Itself, Then Dies

“This is my planet. If I can make a connection to people that this is our home, I’ve succeeded.” -Camille Seaman, artist

With an ancestry of African-American, Italian and Shinnecock Indian in her veins, perhaps it should come as no surprise that photographer Camille Seaman feels a deep connection to the earth, which she affirmed in a recent conversation. Looking me straight in the eye, “This,” she said with noble conviction, “is my planet.”

As a teenager, Seaman went to the renowned Fiorello H. LaGuardia High School of Music and Art and Performing Arts, about which an all-the-rage, blockbuster movie entitled “Fame” was made in the early 1980s. After high school, Seaman went to college in New York to study art, and she says fine art was always her passion as a child. But as a curious caveat, she adds that she didn’t know until she was about 30 that she would “use a camera.” That’s a modest way of putting it for someone whose work is now regularly published in National Geographic magazine, as well as in Newsweek, The New York Times Sunday magazine, and many other venues.

Seaman is a 2011 TED (technology, entertainment, design) fellow, and is currently exhibiting a selection of her digitally-printed, large-format photographs of icebergs at Corden|Potts Gallery in downtown San Francisco. The body of work is contemplative and haunting, invoking an assembly of ancestral beings incarnating their wisdom and presence in gravity-defying physical form, distilled on display in a private, sacred space. Each iceberg in each piece is a persona majestic and monumental, being at once regal and rough hewn, representing millions of pounds of ice amassed over hundreds of thousands of years formed as single entities that mirror and float weightlessly in tandem, adrift in preternaturally serene seas.

Nick Cave once sang a song entitled “All things move toward their end,” Seaman says. This she relates to her work, as most of the icebergs photographed have either perished since 2003-2007, the years when initially captured. Or they have 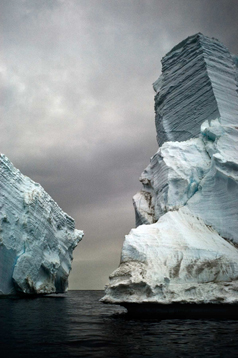 been intractably altered in some way or another. Relating Cave’s song to the arctic environment, she says, “Icebergs give the impression of doing just that, in their individual way, much as humans do; they have been created of unique conditions and shaped by their environments to live a brief life in a manner solely their own.”

To taste and feel the gravitas of Seaman’s soulful expression – what it means to appreciate the fragility and beauty of the earth – is to embrace an awareness that the best solution to preserving the integrity of our planet would be for each individual to experience some resonating force that takes them to a place of reverence and awe of our home – planet earth. Hard facts and scientific data are critical to the equation of our planetary self-preservation, but that alone will not get our collective motivation where it needs to be. As for Seaman’s point of view, this perspective on preservation is much better than the fear of extinction in getting humanity to act wisely.

To be inspired and moved to action in a more profound way, it is often the case that music, song, theatre, dance, sculpture, photography or painting is required to drive the message home. And the art of Seaman provides a dizzying, visual narrative that reveals a dispassionate, photographic observation of a world here on earth rarely seen, a place of irreplaceable beauty, suspected of already being drastically eroded due to climate change.

In this exclusive interview for Truthout, Seaman speaks about her art as an offering – a rare opportunity for viewers to access direct insight into the interdependency of art and science.

Truthout: Would you tell me a little about yourself, Camille?

Camille Seaman: I was born in New York. My mother is black and Italian, and my father is Shinnecock Indian. I was raised mostly by my father’s family.

I went to the “Fame” high school and the state university in New York … all for art. Fine art was my passion as a child. But I didn’t know I would use a camera.

TO: And what happened after your schooling?

Truthout sustains itself through tax-deductible donations from our readers. 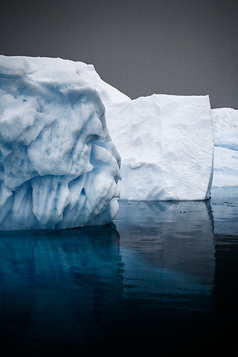 CS: Right after college I turned by back on the art world, because it felt like it was too much rhetoric for me. So I spent a lot of time traveling the world, for example living on a beach in Mexico. I always had a natural curiosity and adventurous spirit and I never wanted to let my fears keep me from doing anything.

TO: Would you talk about the start of your professional career?

CS: When I was 29 I was in the airport in Oakland, waiting for a flight to L.A., and they oversold the flight. They offered to give up my seat in exchange to get a free ticket anywhere. It was to Alaska.

I took the ticket and went to a place called Kotzebue. I wanted to walk across this frozen sea, that’s what came to me. But, I didn’t really understand what that meant at the time.

In any case, the airline lost my luggage, so when I landed all my warm clothes were gone. But the Inuit people there – the women – totally outfitted me with a sealskin parka, gloves, a hat and other essential things.

TO: Do you recall more about that journey?

CS: I had this experience where I got a ride on a snowmobile. Two snowmobiles drove up. It was two people, one on each snowmobile. They told me they could take me out as far as I wanted to go, but could not bring me back. I agreed, deciding that I could just walk back; thinking I would be at the edge of the ice in 2 or 3 miles. I was so naïve at the time, having no idea how far the frozen sea extended. I later found out that from where I would be staying it was 29 miles of solid ice.

I also never knew how fast snowmobiles could go, like 60 miles per hour. And after a few minutes on the back of one, I turned around and the world was gone. It was totally white and I realized that there was no one in the world that knew where I was.

I asked them to stop and got off. Following the tracks of the snowmobile back, I looked around and I understood that this was my planet. I realized that in the end, we all belong to this planet.

Later when I made it back, I told my mother-in-law that, “I had met my planet.”

TO: When did you begin creating the work for this exhibition?

CS: In 2003, it was the beginning of this photo journey; Svalbard, near Norway. Later in Antarctica, I took more pictures, which got shown to National Geographic. And from 2006 on I have been working as a photographer on expedition ships. 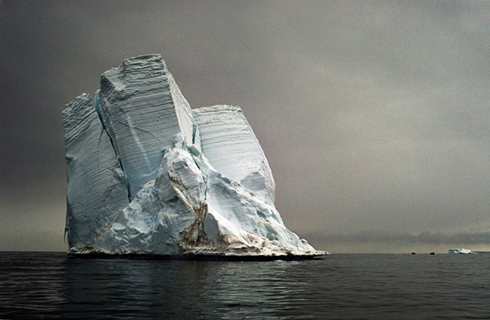 TO: Camille, how do you describe your work?

CS: This is a way for anyone to have a window into a world that they may never have the personal opportunity to experience. These parts of our planet are critical to the comfort of our lives here. I hope people can experience what I experience. When I look at my work, it’s not just what I saw, but what I felt. 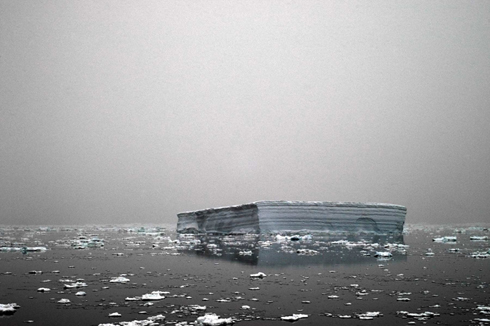 TO: The title of your current exhibition, how did it come about?

CS: The show is called The Last Iceberg.

There is a Nick Cave song where the lyrics are “All things lead to the end.” The icebergs are a great example of that. These things are hundreds of thousands of years in the making and many of these don’t exist anymore. 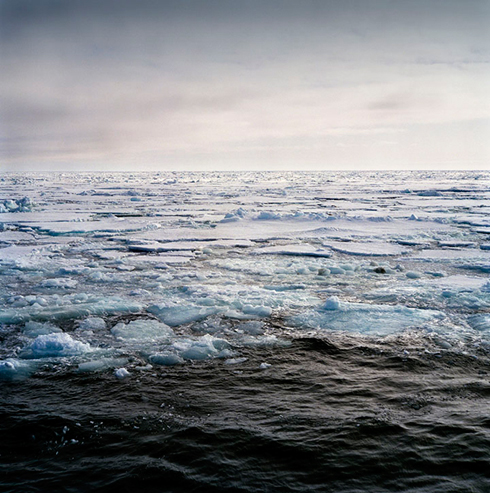 TO: In your experience in the arctic I imagine you’ve watched it change and evolve through the seasons and years. What’s the impact of climate change?

CS: A lot of people always bring up global warming when they see my work. And yet, that’s not why I set out to do this. It can be applied, of course, but what I really hope is that people will feel a connection with their planet in a way they didn’t before. I don’t think anything can come out of negative thinking or fear, but what I do think is that if you feel connected to something, then the choices that you make are very different than the ones when you feel isolated or separate.

TO: Thanks for taking the time to speak with me.

Truthout
Share
"This is my planet. If I can make a connection to people that this is our home
Politics & Elections