America produces 200 times as much oil as Germany, but our gas prices rise and fall in tandem (we pay far lower gas taxes). Source: Energy Information Administration and NY Times.

But as the NY Times pointed out Sunday, facts don’t stop the GOP:

The issue of gas prices has not only been misunderstood but thoroughly distorted by relentless ideological spin from industry and its political allies, mainly Republican. Hardly a day goes by that some industry cheerleader somewhere — be it Gov. Bobby Jindal of Louisiana or Senator James Inhofe of Oklahoma — does not flay President Obama for driving up oil prices by denying the industry access to oil and gas deposits and imposing ruinous environmental rules. Senator John Barrasso, a Wyoming Republican, said last week that Mr. Obama should be held “fully responsible for what the American public is paying for gasoline.”

The Times put together some great charts using EIA data. They make clear 1) oil prices are set on a global market and 2) the strategy of “Drill, Baby, Drill” adopted by the GOP and President Obama has succeeded at increasing production and decreasing dependency on foreign oil — but it has unsurprisingly failed at affecting global markets. 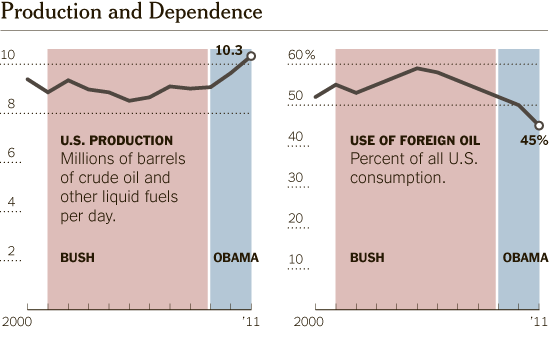 In 2005, oil imports accounted for nearly 60 percent of America’s daily consumption. In 2010, for the first time in recent memory, imports were less than half of consumption, and last year, imports were only 45% — 8.6 million barrels a day of the 19 million consumed. Source: EIA

This is no surprise to anyone who follows oil market analysis. In fact, back in 2009, the U.S. Energy Information Administration’s issued a report that examined the difference between full offshore drilling and continued restrictions. In 2020, there is no impact on gasoline prices. In 2030, US gasoline prices would be three cents a gallon lower. Woohoo!

The bottom line is clear, as the NY Times points out:

With developing countries like China and India demanding more petroleum, prices are likely to stay high. That’s reality — no matter what the Republican spinners say. Only a rounded policy mix of greater fuel efficiency, steady production and the aggressive development of alternative fuels can protect American consumers against what could be even greater price shocks in the years ahead.

Sen. Bingaman (D-NM) made this same point in a major presentation last year: “We become less vulnerable by using less oil.” Grist has a great new chart from Bingaman:

We’re not going to substantially change U.S. gasoline prices through more drilling and more domestic production. We can protect ourselves and our economy from rising prices and oil shocks — and, of course, catastrophic climate change — only by reducing oil consumption.