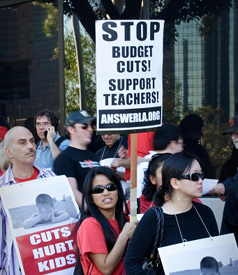 If you haven’t already noticed, there is a corporate/conservative campaign underway to convince the public that public employees are living high on the taxpayer’s dime and should have their pay and pensions cut back. Even during the holidays this attack does not let up.

Background: The Reagan Revolution ended most “defined-benefit” (they pay you) pensions for working people in the private sector, replacing them with “defined-contribution” (you pay Wall Street) pensions. Now with the Great Recession employers have cracked down and private-sector workers are afraid and not willing to risk their jobs by speaking out about abuses. With private workers sector out under control, conservatives are targeting public employee pay and pensions. They are driving resentment of government employees by casting them as overpaid and receiving good benefits at a time when everyone else is under the corporate thumb. Private-sector employees have made sacrifices, so now government employees should, too, they say.

When you see this kind of coordinated campaign from the right (and “mainstreamed” by corporate media) you know it is part of a larger strategic plan. The larger plan is to weaken public-employee unions, including teacher’s unions.

Here is how conservatives turn a strategic narrative into “conventional wisdom” through repetition. Phony conservative think tank “studies” show there is a “crisis,” that pensions are “gold-plated,” etc. This campaign claims the crisis is in government employee pension funds. They also claim public employees are very highly paid compared to the private sector. Then they explain how the “average voter” is affected. This time the claim is high state property and income taxes or an impending “crisis” that cold force states to go bankrupt. When specifically attacking teacher’s unions the claim is that schools are not educating kids because teacher unions block reform.
The news stories follow a conservative template almost word-for-word. You will see phrases like: “Lavish” or “luxurious” or “back-breaking” and “gold-plated” government pensions. You’ll hear that “Taxpayers shoulder the burden” of pensions.

For perspective: Congress just passed tax cuts for the rich along with a huge cut in the estate tax, Wall Street bonuses are up, corporate profits are the highest ever, the top 1% are taking home a higher percentage of all income, and sales of luxury items are breaking records.

The nation’s menu of crises caused by governmental malpractice may soon include states coming to Congress as mendicants, seeking relief from the consequences of their choices. …

… under bankruptcy, judges could rewrite union contracts or give states powers to do so, thereby reducing existing pension obligations.

Civil servants have long prized these benefits as the payoff for a career yoked to lower-paying jobs, but their rapidly rising cost has led to growing resentment in an economy that has forced a relentless tide of layoffs and givebacks in the private-sector workforce. Defined-benefit pensions are disappearing from the private sector. Retiree health coverage is almost unheard of. On Long Island, even the average private-sector wage has fallen behind government pay …

Cities across the nation are raising property taxes, largely citing rising pension and health-care costs for their employees and retirees.

While New Jersey can lessen regulatory loads on business, lowering tax rates is difficult as this exacerbates pension deficit problems. The obvious solution is long term and entails lowering government worker pension and benefit packages. … Public sector unions have demonstrated an unwillingness to forego past agreements in the interest of promoting fiscally sound policies.

At a time when there’s rising fury over public employees’ generous pensions, the report used official U.S. Bureau of Labor Statistics’ data to show there’s one more big area where the taxpayer-funded public sector is thriving at a time of private-sector misery.

Here’s why property taxes are soaring …,

The crisis in state pensions is cascading into a property-tax crisis.

Cities across the nation are raising property taxes, largely to cover rising pension and health-care costs for their employees and retirees.

The biggest obstacle to preventing what happened in Pritchard from happening nationwide might be the public employees themselves. Public union leaders simply refuse to believe America is out of money.

Walker, who has tangled with Milwaukee County unions as county executive, is gearing up for a clash with state workers, seeking wage and benefit cuts and threatening legislation to weaken or eliminate state unions’ bargaining rights if they won’t agree to concessions.

Jim Tobin, president of National Taxpayers United of Illinois, held a news conference at the St. Charles Public Library to discuss what he called a threat to every Illinois taxpayer.

Snyder to start with attack on public-sector spending,

Private-sector companies and workers have made many sacrifices, he said, “and we all need to share in this. So it’s now the public sector coming into more alignment with what the private sector has already done.”