Wage growth has been more rapid for production workers than their supervisors.

The economy added 288,000 jobs in June, making it the fifth consecutive month in which the economy added over 200,000 jobs. This is the longest stretch of 200,000-plus job growth since before the recession. The news was also positive in the household survey with the unemployment rate falling to 6.1 percent, a new low for the recovery. This was due to people entering the labor force and finding jobs; the employment-to-population ratio rose to 59.0 percent. This is a new high for the recovery, but still 4.0 percentage points below its pre-recession level.

The job gains were broadly based. Retail was the biggest gainer, adding 40,200 jobs, with professional and technical services adding 30,100 jobs. The latter sector accounted for 225,100 additional jobs over the last year. Manufacturing of durable goods added 17,000 jobs for the second month in a row. Health care added 21,000 jobs in June and restaurants added 32,800, both close to their average over the last year.

Private social assistance added 12,700 jobs in June. Employment in the sector has increased rapidly in the last three years, rising by 390,000, or 13.2 percent. The government sector added 26,000 jobs in June, almost all at the local level. This matched the April gain as the largest rise since June of 2011. Temporary employment added 10,100 jobs after adding an average of 15,300 jobs the prior two months. This is down from a pace of close to 20,000 per month earlier in the year.

The average hourly earnings of production and non-supervisory workers has risen at a 2.3 percent rate over the last year, compared to an increase of 2.0 percent for all workers. This continues a pattern in wage growth that we have seen throughout the recovery with wages of production workers rising more rapidly than wages of supervisory workers, who tend to be better educated. 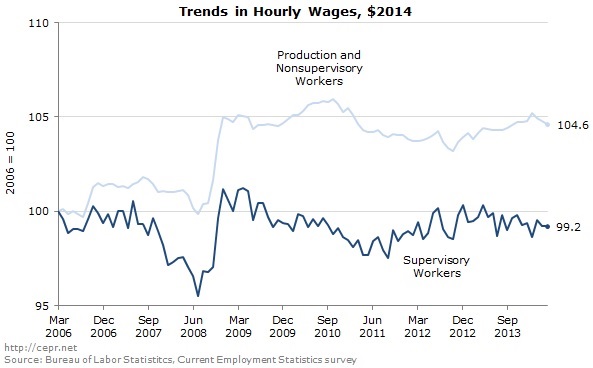 While this might seem to conflict with recent reports showing the gap in wages between college educated and non-college educated workers hitting new highs, these two developments are easily reconciled when we recognize that college-educated workers are increasingly working at jobs that don’t require a college degree. A larger share of college-educated workers is now showing up in the production worker group, crowding out workers with less education. This is the opposite of the skills gap story, although it may still mean that there are good returns for workers getting college degrees.

The duration measures all showed big gains with the median duration of unemployment spells falling by 1.5 weeks to 13.1 weeks. The share of the long-term unemployed fell 1.8 percentage points to 32.8 percent. Both are lows for the recovery. Another piece of positive news is that the percentage of people who are unemployed because they voluntarily quit their jobs rose to 9.0 percent, the highest since the collapse of Lehman. This is a sign of growing confidence in the labor market.

The number of people who are voluntarily working part-time rose by more than 800,000. These numbers are highly erratic, but the June number is 830,000 (4.4 percent) above the year-go level. This is consistent with a story whereby the Affordable Care Act has allowed more people to work part-time since they no longer need employer-provided health care insurance.

On the whole, this is an overwhelmingly positive report. However, even if the economy continued to add jobs at the rate of 270,000 a month, it would still take more than three years to make up the shortfall in employment from the recession.