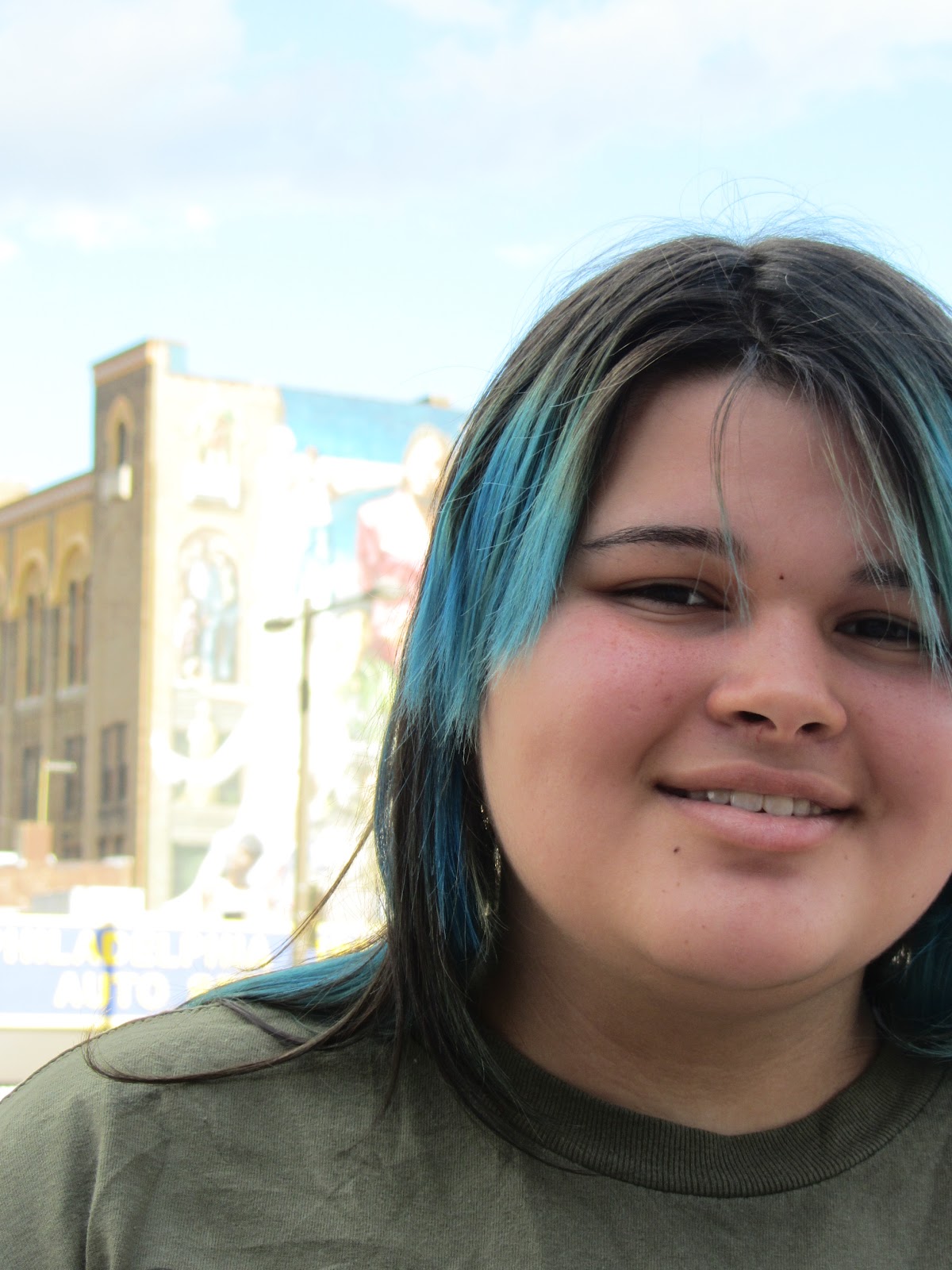 Sasha Rivera is a 15-year-old sophomore at the Multi-Cultural Academy Charter School (MACS) in Philadelphia.

She’s an honors student who never got into trouble at school, and volunteers at Motivos, a national magazine for Hispanic youth.

She also has blue bangs in her dark brown hair. For that reason, she isn’t attending class.

Sasha and her principal, James Higgins, agree that Sasha came to school on Thursday, May 24, and had blue in her hair.

“In the hallway, he turned to me and said my hair color has to go,” says Sasha. She says Higgins told her that unnatural hair color is against school rules. “He said it was in the [student] handbook,” she says.

MACS has a policy that mandates specific clothes students must wear to class, what kind of jewelry and makeup, and even the only two colors of nail polish allowed. The only statement about hair is that it “should be neatly groomed.” However, there is an ambiguous sentence, “Any appearance deemed by the school staff to be inappropriate in an educational setting is not allowed.” That sentence deliberately leads to arbitrary, discretionary, and capricious interpretation that can pose legal challenges. “The whim of an administrator on one particular day does not constitute a rule or regulation,” Jenée Chizick, Motivos publisher, wrote in Sasha’s defense to the chief academic officer of the School District of Philadelphia.

Nevertheless, Higgins says that students can only have “natural hair color.” He has no objections if students wish to dye their hair honey blonde or raven, since he considers those to be natural hair colors. Apparently, highlights and lowlights in female hair are also acceptable. By that logic, there can’t be any objection to teens having white or gray hair, since they are “natural” colors. But, blue or green streaks, highlights, and bangs are not acceptable.

Higgins says he made the decision to exclude Sasha from classes the first day he noticed she had “unnatural” hair color.

However, Sasha has a different story. In her freshman year, she says she had streaks of orange, green, blue, and even blonde in her hair. “I was just experimenting,” she says. For several months in her sophomore year, she had semi-permanent green streaks, but she says no one confronted her. About a week before she was told to get rid of the color or not attend class, she had the blue highlights on her bangs.

“Every day I come to school I go in the front door,” says Sasha, “and he’s always there to greet us and check our uniforms.” Even if he missed all those days, he might have seen her with green bangs on the cover of Motivos. Sasha had proudly brought the magazine to school to share with her teachers and guidance counselor. The photograph was taken March 22, so it had been two months that the principal and the teachers either didn’t notice or care about the color of her hair. Her FaceBook picture shows her with the blue color. She doesn’t know why her principal picked that one particular day to tell her she could not attend class because of her hair color.

Sasha was selected to participate as a Youth Media Ambassador to Colombia, with Motivos for 12 days in late June. She didn’t have trouble getting a passport, complete with a picture of her and her blue-streaked hair. Apparently, her hair color posed no threat to the American image abroad.

Higgins claims he told Sasha she was not dismissed from school. “She can come back any time she has natural hair,” he says. He says he even told her that teachers would give her packets of homework, and she could work in the school office and she could take finals there. But she couldn’t attend class. Sasha and her father, Jaime, wonder why having blue color bangs is somehow acceptable if the student can sit in an office, with students, staff, and faculty walking in all the time, but not acceptable for class.

Jaime Rivera, who supports his daughter and vigorously protested the decision, says he told the administration, ‘You’re denying her an education.” He says he tries “to show my daughter what is right and what its wrong, and to stand up for herself.”

Sasha says other students never complained or made fun of her, nor has her grades slipped because of her appearance.
“We are a very strict school, and decorum is very important,” he says. He says the school, which sends almost every one of its graduates to college, must prepare the students for college-level work. But, when told that college students often have hair colors and styles that he may not think “natural,” he changes first to emphasize the quality of the academic program and then to emphasize that students need to get jobs—and “unnatural” hair color “is not appropriate for job interviews.”

Apparently, under his and the school board’s belief, Marilyn Monroe, Pink, and several hundred thousand white-haired ladies with light blue washes are unemployable. Also unemployable, in this administrator’s thinking, could be Marines who wear their hair “high and tight.” Students who wish to emulate Albert Einstein, Kenny G., Bob Marley, Willie Nelson, and Steve Jobs would be told those hair styles are not appropriate, certainly not the kind that some corporate executive and staff at MACS would wear.

Because MACS, a charter school, receives significant public funds it falls within Constitutional jurisdiction on freedom of expression issues. Most student rights issues date to 1969 in the Supreme Court’s ruling in the Tinker v. Des Moines case, which decided that students and faculty do not “shed their constitutional rights to freedom of speech or expression at the schoolhouse gate.”

Adam Goldstein, an attorney with the Student Press Law Center, notes that courts often rule “Speech and dress is a communicative right to transmit that message” as long as it isn’t disruptive. Higgins acknowledges Sasha’s appearance wasn’t disruptive to the educational process.

In the absence of a specific school policy and the disruption of the normal school day, “There is no basis for the administration’s decision,” says Dr. Robert E. Gates, chair of the Department of Educational Studies and Secondary Education at Bloomsburg University.

“There’s strong legal support for the student who wants to color her hair, since in most places the courts place the burden on the public school official who wants to claim the speech/symbolic expression would disrupt the school,” says Dr. Tom Eveslage, professor of journalism at Temple University, and a specialist in First Amendment law.

About half of the U.S. Circuit Courts of Appeals “are receptive to students’ claims of free-expression rights concerning their hair,” according to the First Amendment Center. The other half, including the 3rd Circuit, which covers Pennsylvania, have not been as receptive. Nevertheless, according to the First Amendment Center, “Generally, courts that have found a constitutional issue have ruled . . . that a student’s choice of hair color and style represents either a First Amendment free-expression issue or a 14th Amendment liberty or equal protection issue.”

Adam Goldstein notes that schools could regulate hair color and appearance if “people don’t understand the message.” If Sasha Rivera had a T-shirt with a message that declared blue highlights is a protest against an illogical dress code, “that would be protected speech,” says Goldstein. If she handed out flyers to protest the policies of the school, “that would also be protected” by all courts, he says.

Goldstein suggests that the principal’s demand for “natural” hair color “is monumentally dishonest in that [he believes] students somehow can’t function within presence of someone who has blue in her hair.” The school board and its administrators, says Goldstein, “should be asking, ‘Does this rule make any sense?’ and ‘What is the best way to learn?’ not ‘what is the best way to appear?'”

A letter from Frank L. Mannino, dean of students, on June 4 advised Jaime Rivera that Sasha was subject to administrative failure. Because of previous unexcused absences—some to deal with her mother’s extended illness, the others because of not being allowed in class—Sasha had exceeded the 25 absences the school allows and, thus, according to Mannino, results in “failure to accumulate our minimum credit hours in the classroom.”

MACS, defending its hair color policy and “decorum” issues, suggested she could take finals under special circumstances. However, Sasha now says she doesn’t wish to return to MACS, is willing to accept a school-imposed failure, and would take her entire sophomore year over again at another school, one that supports diversity in all of its forms.

Among the principles the Multi-Cultural Academy Charter School claims to have are “Celebrating and embracing diversity in cultures and individuals . . .” and “Viewing each student as an individual while educating and mentoring the whole child . . . “

Apparently, those principles apply only if the students agree with what the school administration believes a student should look like.