While gun control was a major focus of Chicago’s walkouts, some of the city’s most spirited walkout organizing came from youth who were more concerned with the conditions that incubate intra-community violence.

On Wednesday, thousands of students around the United States answered a national call to action by walking out of class. But while the initial ask from Women’s March Youth EMPOWER called for students, teachers and school administrators to exit their school buildings for 17 minutes to demand “gun reform legislation, “yesterday’s protesters did not rally behind a uniform message. While many students held to a general demand for more gun laws, others went different routes. For example, students with Juntos and the Philadelphia Student Union called for divestment from in-school policing, and greater investment in mental and emotional health services. They demanded the creation of restorative justice programs and measures aimed at protecting students and families from ICE, in addition to gun control measures that do not “result in targeted policing of black and brown bodies.” Students at New York’s Central Park East High School also called for the “decriminalization of black and brown students in our schools.” And in Chicago, students at a number of schools refused to simplify the violence they face in their communities. 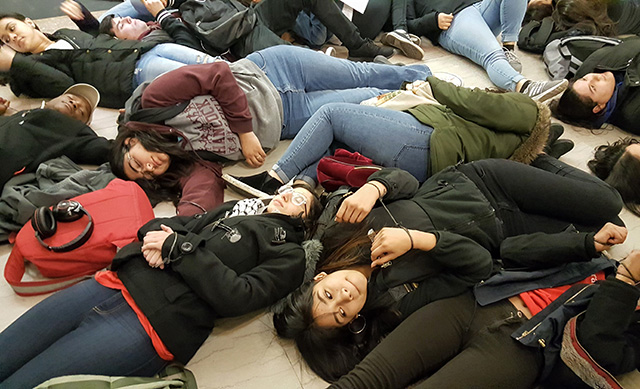 Chicago students stage a die-in at City Hall with their hands bound in mock zip ties to illustrate the criminalization they experience, in addition to gun violence. (Photo: Kelly Hayes)

While gun control was a major focus of Chicago’s walkouts, some of the city’s most spirited walkout organizing came from youth who were more concerned with the conditions that incubate intra-community violence, and how those conditions are maintained and enforced by the state. After participating in their respective walkouts, students from half a dozen Chicago high schools organized a small rally downtown to confront city officials and uplift their demands. In a statement, the group said that Chicago Public School students “are constantly faced with threats of budget cuts and school closings, while gun violence continues to threaten our communities.” The students condemned Mayor Rahm Emanuel’s efforts to build a new $95 million police academy in the city’s Garfield Park neighborhood while their schools are threatened with budget cuts and closures. The students argued that greater investment in special education, ESL services and mental health services, rather than policing, metal detectors and further criminalization, would help create a “safe and welcoming environment for students.” As one student declared, after the rallying students rushed into City Hall, “Don’t arm our teachers! Arm us with books and resources!” 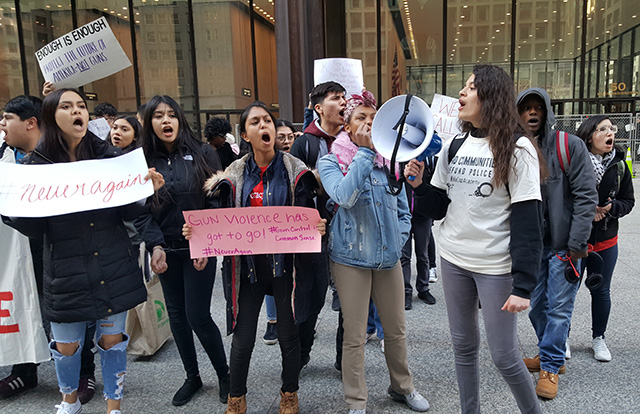 Students rally in Daley Plaza after staging a speak out and die-in at City Hall. The students then marched to Chicago Public School Headquarters. (Photo: Kelly Hayes)

The Chicago students who converged downtown read their demands aloud multiple times during the event, which spanned several locations. These demands, which youth organizers distributed to journalists, included a new moratorium on school closures, more school counselors (a ratio of at least 1:200 students), librarians in every school, more after-school programs and a full-time nurse for every school. The students also demanded restorative justice trainings for school staff, more youth jobs and an end to charter school expansion. Additionally, they called for the city to reopen mental health clinics that have been shuttered under Rahm Emanuel’s administration. The students repeatedly contrasted the city’s failure to meet the needs of its youth with the mayor’s willingness to spend an extra $95 million on Chicago’s infamously racist and violent police department. 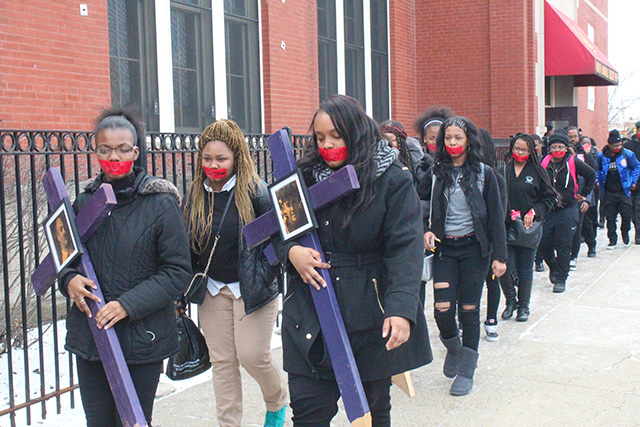 Students from North Lawndale College Prep created imagery that represents what their community has lost to gun violence, as well as the silencing they experience. (Photo: Ervin Lopez)

Chicago’s youth, who have long been engaged in struggle and advocacy, brought their own unique perspective to the larger day of action. In various ways, they challenged the national day of action’s approach to the idea of “safety,” which is a concept many Chicago students feel is only enjoyed by members of social and economic echelons beyond their reach. Their words and experiences should serve as a caution to the rest of us not to oversimplify what young people in the United States are up against. Calls for gun control can too often flatten the complexities of urban violence into talking points and blanket calls for more criminalization without taking into account the complex experiences of the criminalized.

Students rallied on Wednesday to remind us that their experiences are not uniform, and that what seems solutionary for one community might actually harm another.

As Parkland activist student David Hogg recently commented, putting more police in schools may be comforting to some people, but it also widens the school-to-prison pipeline. Chicagoans, and those who were watching on social media, were reminded of the criminalization struggles Black students face during Wednesday’s protests when Black students at one of the walkout locations were actually handcuffed by police.

Some of those who participated in the walkout were quite blunt about how criminalization fails them, such as a student at Chicago’s Sullivan High School whose sign simply read: “Gun Control Is Not The Answer.” Students in Englewood, a chronically underserved neighborhood, uplifted the memories of Laquan McDonald and Ronald “Ronnieman” Johnson, who were both gunned down by police. 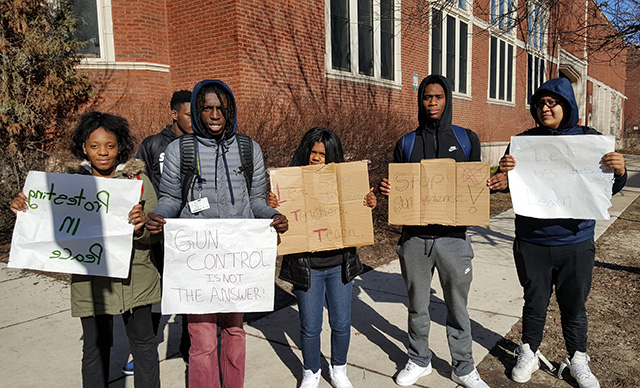 Students at Sullivan High School begin gathering outside their school before a neighborhood march. One of the students holds a sign that reads, “Gun Control Is Not The Answer.” (Photo: Kelly Hayes)

Amid a larger movement moment, some students rallied on Wednesday to remind us that their experiences are not uniform, and that what seems solutionary for one community might actually harm another, or at the very least, fall short of anything that could produce safety in their schools. And while efforts to win gun control measures seem to be parked at a dead end in Congress, for the time being, the kinds of demands Chicago students are making can be fought for around the country, in local battles that could prove far more winnable. Since this moment of enthusiasm around gun control was not sparked by the kind of everyday, urban violence students in major cities face, but by the altogether rare phenomenon of mass school shootings (that primarily affect white students), perhaps the Chicago protests and those like them should serve as a check to our national conscience. This check would not decrease the empathy we feel toward the students at Marjory Stoneman Douglas High; it would expand that national empathy, and the sense of urgency that accompanies it, to those whose suffering our society has long normalized, because they too deserve the support of an enraged nation, marching for their lives. 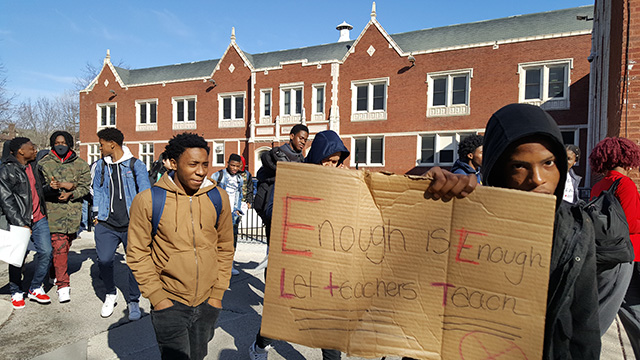