Today, on the morning of the pre-trial hearing of the “ NATO 3,” — who are being charged with “conspiracy to commit terrorism,” “terrorism” and “possession of incendiary devices”– another explosive (excuse the pun) revelation has been made by Occupy Chicago.

In an article I published yesterday on TruthOut, a picture of only one of the two police informants, “Mo,” was published in the press for the first time.

Now, the other informant, “Gloves,” has in some ways been outed, with two pictures of her up online for the world to see for the first time thanks to Occupy Chicago activists. The pictures can be seen below: 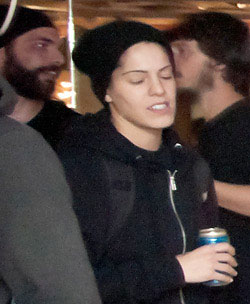 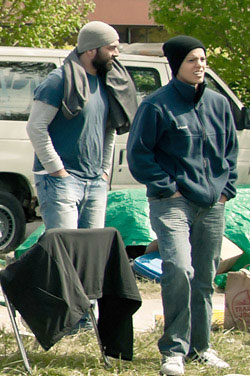 “We do have pictures of ‘Gloves,’ but they’re not clear enough to make a positive identification,” NLG legal worker Kris Hermes told me in an interview in the TruthOutarticle. “We understand they’re both in their 30s, but we’re not sure of their age.”

“Mo” and “Gloves” have been described as the informant “threads” that bind the five NATO Summit activists charged with “terrorism.”

“The thread between all five was the informants that we believe were provoking criminal activity,” said to me in the Truthout article. “We believe it was the same two informants, which has been ascertained from the arrestees.”

Stay tuned for more coverage from the front lines. Much more to come.

Occupy Chicago has obtained photographs of suspected police informants, who according to witnesses and arrestees were part of a law enforcement operation, which has resulted in the prosecution of 5 NATO protesters on terrorism-related charges. The city has yet to admit to using infiltrators in the Wednesday night raid on a Bridgeport home of activists, but both suspected police informants who go by the names of “Mo” and “Gloves” (aka “Nadiya”) were arrested with 9 others but then mysteriously disappeared. Mo and Gloves have not been seen since.

According to Occupy Chicago activists, Mo and Gloves took part in various organizing efforts over the past few weeks. Mo was arrested during an action on April 17th at 63rd & Woodlawn to protest the closure of a mental health clinic. The so-called NATO 3 (Jared Chase, Brent Betterly, and Brian Jacob Church), who came to Chicago from Florida, were befriended by Mo and Gloves and were likely sought out by the informants because of the out-of-town activists’ unfamiliarity with local Occupy Chicago organizers.

Although the State’s Attorney has not made any connections between the NATO 3 and two additional protesters with terrorism-related charges, the common thread between all of the cases is the involvement of Mo and Gloves.