It’s not your average protest slogan, but it’s what the group chanted today as it marched from Zuccotti Park to 120 Broadway, which houses the office of New York State Attorney General Eric Schneiderman. The AG chairs President Obama’s task force to investigate the routine fraud and abuse that characterized Wall Street during the Bush-era inflation of the housing bubble and precipitated the 2008 financial crash and subsequent recession. According to a Schneiderman-penned Daily News Op-Ed, though, the task force has only been furnished with “[m]ore than 50 attorneys,” whereas the Enron investigation alone required over 100, and the Savings and Loan crisis took over 1,000. Wall Street occupiers today, under the banner The May Fourth Committee for Equal Justice Under the Law, offered to fill that void.

“We can investigate,” said Leo Eisenstein via the people’s mic. “We’re tired of waiting for them, so we’re stepping up.”

Alexis Goldstein, a former net developer and business analyst at three large Wall Street firms, echoed that sentiment. “In January,” she told the crown. “President Obama appointed a financial fraud task force co-chaired by five people to investigate mortgage fraud. He touted it proudly in the State of the Union. But since the task force was created, we’ve seen zero prosecutions brought against the banks who committed securities fraud, conducted robo-signing, and illegally foreclosed on homes. We’ve seen no one thrown in jail following the biggest financial crisis since the Great Depression.”

Austin Guest brought a calculator, a pocket protector and news clippings. “I’m good at investigating,” he told me. “Frankly, it doesn’t seem very difficult. People are on record committing fraud. I’m very capable of using Google and a printer.” 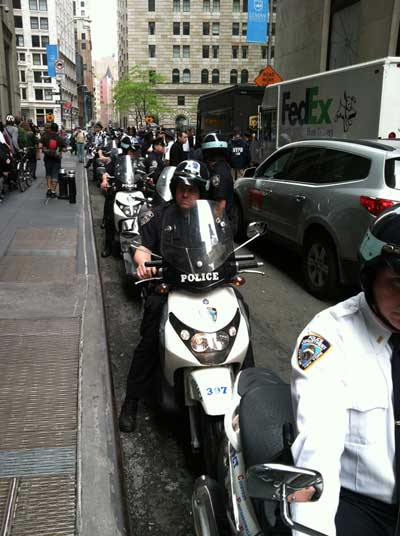 In a surreal turn of events, I counted 36 police officer, 8 of them on motorcycles, all there to contain and supervise roughly 50 civilians offering their help to law enforcement. “Why the resistance?” the civilians implored. “We’re offering assistance!” 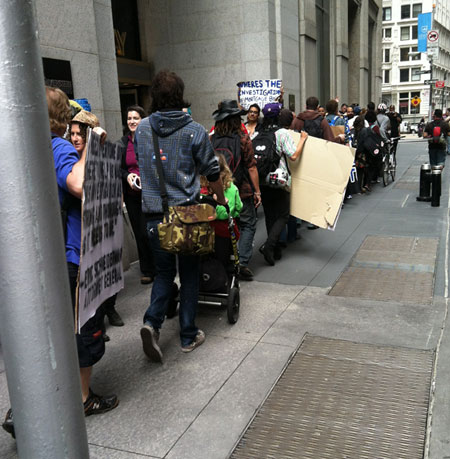 (Photo: J.A. Myerson)On the picket line outside the building, Tammy Shapiro held up a hat. “This investigation is severely under-funded,” she announced. “If you have some money for this investigation, put it in the hat.” Picketers passed the hat around, ultimately collecting three dollars.

Inside the lobby of the building, 14 petitioners, mostly dressed in business outfits, sat in a circle on the floor and declared that they would leave when they had secured an agreement from the AG’s office for a public forum on the task force. “What are the obstacles?” Han Shan raised as one question to be addressed at the proposed forum. “And why is it under-staffed?” Deliberations in the group brought about consensus that they would not set a time limit for the forum. One person had suggested 30 days, while another worried that this would be unreasonable and proposed a more generous 90-day window. 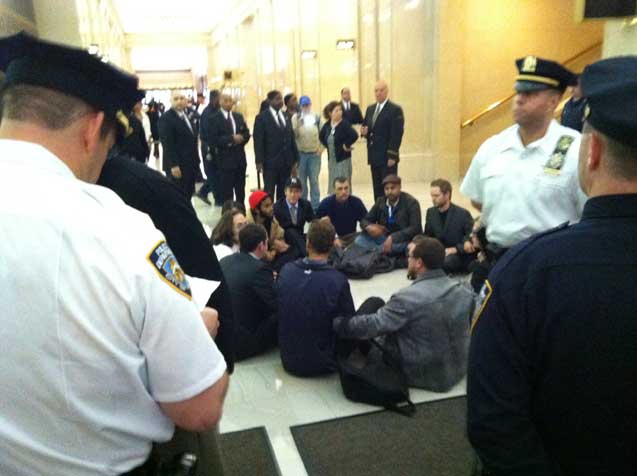 As NYPD officers thoroughly outnumbering the sitting civilians confabulated with the building manager, the would-be investigators read their statement aloud in unison. Here it is in full:

Today, a group of citizens is staging a sit-in at your office at 120 Broadway. Whereas most sit-ins aim to disrupt, ours will be different: our goal is to propel you forward.

President Obama has tasked you with co-chairing the Residential Mortgage-Backed Securities Fraud Task Force, and the last thing we want to do is get in your way. However, since the creation of this unit, over four hundred thousand homes have been foreclosed on – that’s over four thousand a day – and not a single bank or corporate criminal has been brought to justice.

Your job title is “The People’s Lawyer.” We are the People. We want to help you with the People’s Investigation of mortgage-backed securities fraud and other crimes of the recidivist banking industry. We know that the only path to lasting structural reform involves holding accountable those institutions that committed fraud.

We’ve read reports that you have not been given the staff or the resources you were promised. That is unacceptable, so we are stepping up. You said recently, “I need everyone out there to help us make this investigation as strong and thorough as it needs to be” (The American Prospect, 4/23/12).

We are here to answer your call.

We’re tired of transactional politics. We are pushing for transformational change. We want justice that is sweeping, swift, and blind to the influence and power of those who are guilty. We know you want the same. But we also know that you face considerable political resistance – which is why we’re here today to help.

The May Fourth Committee for Equal Justice Under the Law

Concerned Constituents of the Economy

Onlookers applauded the statement as James Freedland stepped forward and announced himself as a Spokesperson for the AG’s office. Mr. Shan approached him to negotiate the demand, a talk they conducted away from cameras and the press.

During negotiations, the building manager, without consulting the Attorney General’s office, read a prepared statement – prepared when and by whom? – instructing the volunteer investigators to vacate the premises immediately and indicating that, if they did not, he would instruct the police to arrest them for criminal trespass. Several tried to explain that they were currently in negotiations with the AG’s office and would happily leave upon the successful conclusion of those negotiations. Then, the police went to work.

One read another, mysteriously nearly-identical prepared statement into a bullhorn again instructing vacation and threatening arrest for criminal trespass. Most of the civilians stepped away, but four volunteered for arrest rather than abandon negotiations. Their names are Brett Goldberg, Daniel Scott, Henry Harris and Jordan Stern. They were arrested without physical resistance but over continued verbal objections and explanations of the situation.

Officer Tloczkowski, who has a history of arresting journalists, pushed me aside while I was getting Mr. Freedland’s name and, when I pointed out that I was in the very midst of reporting and nowhere near the sit-in, he grabbed me by the book-bag and moved me by force. The police had the press corralled away from the arrestees and insisted we cross a line to be suitably out of harm’s way, or something. Unfortunately, that location was on the other side of a security guard’s desk. That guard, a Mr. Sharif Maiga, told us we were not allowed beyond his desk, whereupon the NYPD, Tloczkowski at the helm, proceeded to shove me into the other journalists and push us all the way through.

Schneiderman’s spokesman, Mr. Freedland, commented in an e-mail, “The Attorney General shares the goal of citizens who seek accountability for any misconduct that contributed to the bubble and crash in the housing market, and we appreciate their support. Reckless deregulation and irresponsible conduct that brought down the American economy must be systematically investigated, and, at the same time, we must deliver as much immediate relief as possible to protect New Yorkers whose homes are at risk now.”

Share
This article may not be republished without permission from Truthout.
JA Myerson