Labor Day is supposed to be a celebration of workers, but it’s been a long time since workers have been celebrated — or for that matter, have had a reason to celebrate. That’s because the union movement that gave us this holiday is, at least numerically, a shadow of its former self.

If we really want to give workers something to cheer about, we need to revitalize unions. 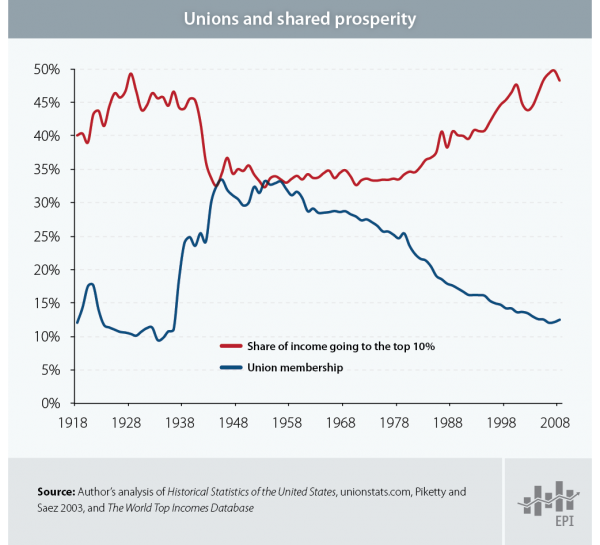 It’s no coincidence that prosperity was widely shared when unions were at the height of their power in the decades after World War II, and that inequality has soared as unions have been weakened.

That’s what I conclude in Inequality: Rebuilding the Middle Class Requires Reviving Strong Unions, a new Campaign for America’s Future report. My analysis tracks the simultaneous decline in the power of the labor movement and the fortunes of middle-class workers. It makes the case in simple terms.

One chart reinforces the point. It compares union membership with the share of income going to the top 10 percent since the 1920s. When only one in 10 workers belonged to unions in the early 1930s, the richest 10 percent pocketed nearly half of the nation’s income.

Then President Franklin D. Roosevelt began a set of bold New Deal initiatives that dramatically increased the power of workers to join unions and bargain collectively. The share of workers who were unionized rose to about one-third by the late 1940s. At that point, the bottom 90 percent saw a significant increase in their share of national income.

Today, as union membership declines to low levels last seen in the 1920s, the share of national income going to the top 10 percent is rising — to levels not seen since then either.

Combine that with lackluster economic growth and you get the result chronicled in an August report by Sentier Research. As The New York Times reported, Sentier found that median incomes, when adjusted for inflation, had fallen 3.1 percent since 2009. They remain significantly below what they were in 2000.

A corporate-driven propaganda campaign has for decades blamed labor unions for saddling American corporations with burdens that made them uncompetitive in the global economy.

That has proven to be cover for dismantling the forces that kept corporations from rigging the economic rules in their favor. When corporate power was kept in check by union power, workers and corporations at least had a fighting chance to prosper together. Without that check, workers are losing. As wages erode, benefits disappear, work conditions become harsher and jobs themselves become more unstable.

The good news is that a combination of worker-activist movements and bold political leadership is setting the stage for a potential resurgence of the labor movement. In Los Angeles and other cities, newly elected pro-labor officials are making companies that benefit from local zoning or contracts pay a living wage and accept unions when a majority of workers indicate they want one.

President Barack Obama has used executive orders to raise the minimum wage for federal contract workers and require adherence to basic fair labor standards, including the right to organize. These orders could have effects that ripple through to private sector workers.

Labor Day would live up to its purpose if it not only gave workers a temporary respite from the rigors of their jobs, but also drove a national effort to empower workers once again to rebalance the economic scales so that we can rebuild a growing, stable middle class. It needs to be a day on, not a day off, in the effort to reclaim the American dream for working people.