Holes too big to fix were poked in TransCanada’s narrative that its Keystone XL tar sands pipeline will be the safest pipeline ever built. And questions were raised about how the pipeline company’s financial dealings are set up during Public Utilities Commission hearings in Pierre, South Dakota last week where state regulators are tasked to decide if the company is capable of following the rules the state set when the original Keystone pipeline permit was granted in 2010.

A team of lawyers representing Native American tribes and the grassroots group Dakota Rural Action took the upper hand during the proceedings as they tried to have a TransCanada executive’s testimony impeached. The proceedings took on a circus-like atmosphere when TransCanada was unable to prevent lines of questioning it didn’t like.

The commissioners seemed unsure of its own procedures. At one point, Commissioner Gary Hanson expressed frustration that he was having trouble drawing a distinction between TransCanada’s evidence and its advertising statements.

The testimony of TransCanada’s key witness, Corey Goulet, president of Keystone Pipeline Projects, turned out to be an important centerpiece of the hearing.

In pretrial testimony filed by Goulet, he stated the company would have no problem meeting the Commission’s amended conditions.

However, TransCanada’s promises to build safe pipelines have been called into question with several high-profile incidents involving its existing pipelines, particularly the corrosion problems with the Keystone 1 pipeline.

A TransCanada ‘root cause analysis’ document, made available online by DeSmog on Tuesday, shed troubling light on the external corrosion encountered on the Keystone 1.

When Goulet was questioned about the significant corrosion discovered on the Keystone 1 pipeline in Missouri in 2012 – when the pipeline’s wall had corroded in one spot to the thickness of a dime – he downplayed the incident, claiming that none of the defects were close to rupturing.

“None of the defects, in my experience in 30 years of pipelines, would be injurious from the perspective of being close to rupturing. Therefore the only problem would have been the depth of corrosion,” Goulet testified. (Audio of Goulet testimony, relevant corrosion section at ~ 32:45 – 33:40)

Bruce Ellison, one of the lawyers for the interveners, had handed Goulet a copy of the company’s root cause analysis report of the incident, before pointing out the corrosion area was much larger than Goulet had described. One of the defects involved a section of pipe where the wall had eroded 96.8 percent, which Ellison noted was close to a rupture incident.

TransCanada lawyers objected to any reference to the report because Goulet claimed he had never seen it and that it was classified. But since the report had already been entered into evidence, the interveners’ lawyers were allowed by the Commission to continue questioning him.

In the course of discovery, TransCanada provided the report in question as part of the unclassified documents, and therefore could not exclude the report from evidence, the Commission said.

After that dispute was settled, Goulet admitted he knew the location of sites where the pipeline had been dug up for inspection and repair.

As indicated in the ‘root cause’ report, Site 5 was only 200 feet from the Mississippi River, the primary drinking water source for 18 million Americans, as well as agricultural water for crop production. 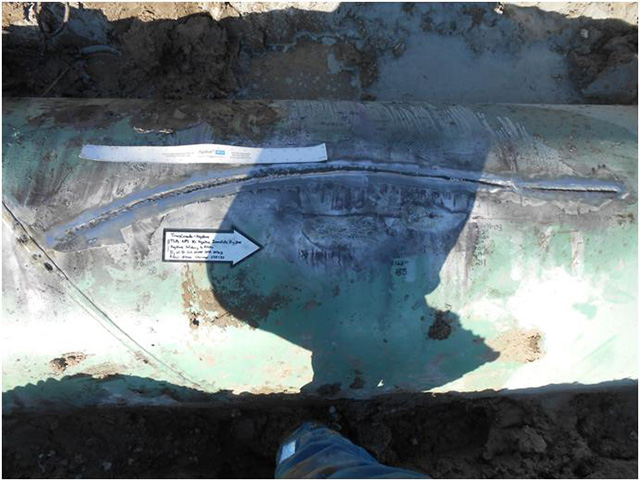 Evan Vokes, former TransCanada employee turned whistleblower, and an expert witness for the interveners, told DeSmog he has never seen a pipeline coating corroded as badly as the failed coating of the Keystone 1. It looked as if “it had been gnawed at by rats,” he told DeSmog.

Another former TransCanada employee reviewed the report and found it shocking. The fact that damaged sections of the pipe were repaired instead of replaced concerned him greatly. “We cut out better pipe than what I’ve seen in those pictures,” he told DeSmog.

TransCanada’s Tax Revenue Calculations Off by a Lot

Goulet testified that the considerably lower amount of taxes TransCanada paid was less than had been estimated before construction – although the tax rate has since increased.

While he stated he didn’t know the technical details of how the taxes are applied, he went on to testify that “TransCanada Pipeline LP is the owner of the Keystone XL pipeline,” explaining that it is a wholly owned subsidiary of TransCanada Corporation. While TransCanada Corporation has assets in excess of $50 billion, not all of that value would be assessed for tax purposes. Only the subsidiary’s assets would, Goulet explained. While TransCanada estimated that Keystone 1 would deliver at least $45 million in tax revenue to communities, Goulet admitted that the company has only paid $18.4 million over the first 5 years of the pipeline’s operation. That’s roughly a third of what TransCanada had estimated as the benefit it would deliver in tax revenue to affected communities.

Goulet cited higher capital and operating costs for the discrepancy, blaming regulatory delays, technical changes, and inflation were responsible for the costs ballooning to nearly $2 billion for the Keystone 1 project. (Audio of hearing, relevant section on taxes at ~ 1:22:15 – 1:32:00)

The tax revenue discrepancies could have real impacts on communities that bank on the future of the Keystone pipeline.

“In Harding County a bond was passed and a new school was built on the premise that TransCanada’s pipeline taxes would help pay for it,” Bret Clanton, a member of Dakota Rural Action said.

In afternoon testimony (audio from ~1:48:00 on), David Diakow, TransCanada’s Vice President, Commercial, Liquids Pipelines, opened the door to information that related to TransCanada’s business dealings related to the project.

Robin Martinez, a lawyer for the interveners, described what came next as unusual in an email to DeSmog,

“Paul Blackburn, one of the attorneys for the intervenors in the proceedings, started to question Mr. Diakow about market demand for the KXL pipeline. He began inquiring as to whether TransCanada’s customers were demanding changes to their contracts, which TransCanada objected to, claiming their contracts and communications with customers were highly confidential. TransCanada then argued that Mr. Blackburn’s questions relating to market demand for the pipeline were not relevant to the question of whether or not TransCanada could meet the conditions imposed by the Commission when it granted the original permit in 2010. However, by placing Mr. Diakow’s written testimony into the record they opened the door to full cross-examination of him under the applicable administrative procedure rules. Apparently not wanting to have him questioned, TransCanada withdrew him as a witness and asked the Commission to strike his testimony from the record.”

The Commission limited the scope of all further testimony for both parties to be pertinent to the amended conditions of the original 2010 permit, strictly limiting evidence presented for the remainder of the trial.

Peter Caposella, the lawyer representing the Rock Sioux Tribe said in all his years as an attorney, he had never seen a plaintiff remove their own witness in such a manner.

As the near failure of the Keystone 1 line proved, the consequences of siting TransCanada’s bitumen-carrying export lines so close to drinking water supplies is a risk we can ill afford to accept in an age of water scarcity and climate disruption.

Even if President Obama denies the permit for the pipeline to cross international borders, the next administration could reverse that decision.

However, if the South Dakota Public Utility Commission decides TransCanada isn’t up to the job, TransCanada will have to start the entire re-permitting process again.