© 2023 Truthout
Inside Organizing and Outside Representation

Organizing workers into a union usually brings out the best in labor. Organizers are truly motivated, committed, work long hours and genuinely believe in helping workers.

But not everything is always as good as it appears. We know from watching pumped-up, 30-second movie trailers that the full 90-minute release might not actually measure up to its hype. We are sometimes disappointed. It’s the same with us in the union movement.

We have to work on closing the gap between how we project ourselves so favorably while organizing and how we sometimes actually perform so routinely while representing.

Connecting these dots of representing current members and recruiting new workers played out on the downtown streets of San Francisco on Friday, February 19.

UNITE-HERE, Local 2, was conducting one of their trademark “All Day, All Night Sieges” of the boycotted Grand Hyatt in conjunction with their ongoing six-month contract dispute with 63 city hotels.

Bullhorns were blaring, drums beating and dozens of loud, enthusiastic, chanting picketers were making sure hotel guests heard loud street sounds from every angle and from each of its 35 floors – “A contract or a boycott!” and “Don’t check in, check out!” Judging from the confused and irritated looks, it appeared that at least some of the guests exiting the hotel wished they had taken that last bit of advice.

Meanwhile, ten blocks away, on this same February 19 evening, another Local 2 protest was taking place in the main lobby of the nonunion Le Meridien hotel. The premier hotel is in the middle of the city’s Financial District, only steps away from picturesque Chinatown and atmospheric Little Italy.

But there is another side, an underside if you will, of this grand hotel.

In only eight years, its owners, HEI Hotels & Resorts, have become one of the largest hotel management firms in the country. The union wrote that it specializes in buying properties, lowering labor costs and selling them off quickly for a profit.

Collective bargaining is clearly not a good “selling point” for these quick-sale speculators.

For example, Le Meridien San Francisco management rejected an employee petition in June 2008 that suggested fairer ground rules for how employees could select a union. Local 2 has won this same proposal for a “Card Check or Majority Sign Up” agreement at many locations in the city where around 90 percent of the big hotels are now union.

However, Le Meridien remains a big stumbling block. In February 2009, employees responded by calling for a boycott of their own hotel. Demonstrations have occurred almost weekly ever since.

Hundreds of religious, community and political figures have spoken out in favor of the boycott, including David Chiu, president of the San Francisco Board of Supervisors, who said, “hotel workers and the hotel industry are critical to our city’s economy, and we ask the hotel owners to respect the workers’ choice to organize freely as other San Francisco hotel companies already do.” 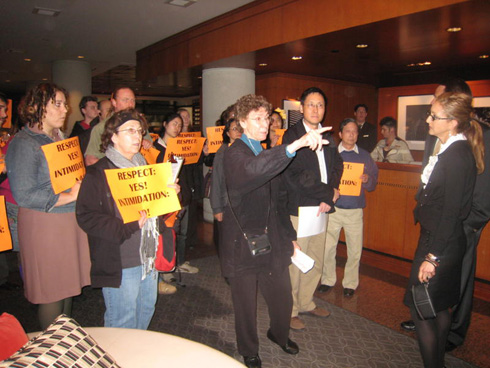 According to the union, harassment of Le Meridien employees continues into 2010. On February 4, the manager threatened to fire three union supporters. On February 9, he told employees asking about a newspaper report that the hotel might not be paying its mortgage that their petition of inquiry would be thrown away.

This arrogance is what triggered two-dozen religious, community, student and labor figures to pay an unannounced visit to the hotel on February 19. The delegation stood quietly in the congested main lobby holding up signs that read “Respect Yes, Intimidation No.”

Spokespersons Sister Bernie Galvin and Gordon Mar told the front desk clerk that no one was leaving until a meeting with the manager. Two unnerved top representatives from human relations hurriedly showed up claiming the manager was not on the premises. Of course, they still received an ear full from delegation spokespersons, who asked for an end to the reported harassment of employees.

Ignoring dismissive suggestions from our erstwhile management protagonists to “write us a letter,” half a dozen activists made their own additional comments in full view of guests and workers who all seemed to equally enjoy the obvious discomfort of the two hotel representatives nervously fiddling in their own sacrosanct main lobby.

Besides being lots of fun, this action and similar ones that preceded it at the hotel accomplished two goals for the union. First, it obviously puts the hotel on notice to respect employees seeking rights to organize. Rev. Israel Alvaran, Local 2 community organizer and member of Clergy and Laity United for Economic Justice (CLUE), told Truthout, “the community is watching and this disrespectful attitude towards workers will not be tolerated under our watch.”

Secondly, it provided outside support to hotel employees inside who are attempting to organize the union. As one union leader told Truthout, “workers are stronger when they are united holding their employers accountable for their actions. And we as a community then must stand by them, must continue to mobilize support, provide legal assistance and, in fact, back up their efforts on every level.” 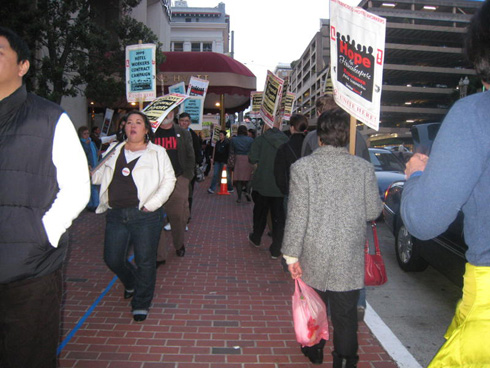 Picketers urging a boycott at the Grand Hyatt in downtown San Francisco.

It is generally assumed that the contract dispute is going to be a long fight. The union has an extremely tough array of hotel adversaries that are determined to impose higher health care costs, increase workloads and lower wages despite bloated treasuries more than enough to satisfy the union’s primary objective of maintaining current health benefits.

Local 2 won total victory in a two-year fight ending in 2006 against this same aggregate of greed by regularly mobilizing its members and involving community allies. This time around, their coalition will be strengthened by inclusion of more hotel workers desperately seeking collective bargaining rights and a voice on the job.

Solidarity among union members and their more vulnerable unorganized fellow workers is a powerful alliance that can possibly even the odds in this showdown.

It is very fortunate that the union’s program enjoys the enthusiastic support of members as evidenced by the hundreds of activists regularly participating in actions. But this is not accidental.

A very good consequence of Local 2’s militant “One Union, One Contract” approach that all hotels, big and small, should provide the same wages and benefits, is that the membership remains united regardless of where they work. They also more generally understand how expanding this same solidarity throughout the industry protects their contract.

This is a classic labor confrontation taking place in San Francisco between two formidable foes, one has money, and plenty of it; the other has people, with more on the way.

Truthout
Share
Organizing workers into a union usually brings out the best in labor. Organizers are truly motivated
Economy & Labor