On this International Women’s Day, we bring you a photo essay about Indigenous and rural women and their innate connection to nature. Women’s rights and gender equality are crucial for not just women, but also for their communities and the environment. Women play a key role in the conservation of biodiversity and forests. A growing body of evidence shows that increasing women’s leadership in natural resource management and governance is not only beneficial for biodiversity but also empowers women, increases their livelihood opportunities, improves their ability to plan for their families and results in positive outcomes for their communities.

Across the world, women are often the principle caretakers of their families and responsible for important tasks like energy generation; collection of food, water and medicine; seed saving; and generating income for their families. Hence, with the loss of biodiversity and forests, women are disproportionally affected, bearing increased burdens to make ends meet. Women are also often excluded from decision-making and prevented from owning key resources like land. Many national policies also exhibit patriarchal and discriminatory attitudes (e.g. patrimonial land inheritance). On this Women’s Day, let us be reminded that the struggle for women’s rights is far from over and more crucial than ever. 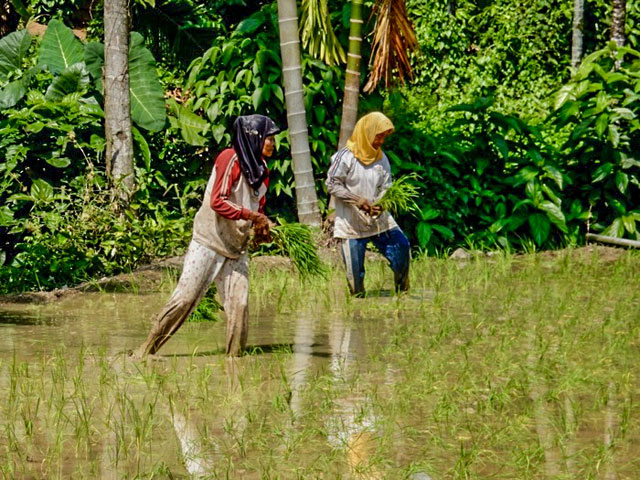 These are women from the Minangkabau Indigenous tribe in West Sumatra, Indonesia. Many women work as farm laborers to earn an additional income, but they only earn half of what men earn for the same number of hours. In this village, women have been organizing to obtain social forestry management permits to ensure that they can benefit from the sustainable use of forest products and also conserve their forests by aiding in their regeneration. Photo: Chaus Uslaini 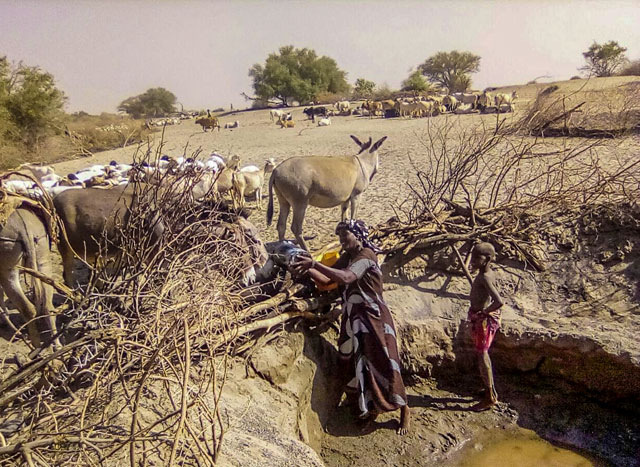 Pictured here is a Rendille woman from Kenya. Rendilles are pastoralists, keeping camels, goats and sheep. Because of acute drought, most of the men have migrated away in search of pasture and women became the sole breadwinners of their households, raising their income through sale of beadwork.

Women are in charge of domestic chores such as fetching water, gathering fuel wood from forests, cooking, taking care of children and also for the construction of their homes. Women are the holders of traditional knowledge relevant for conservation and ensure inter-generational learning.

As women in these communities do not own land, they are increasingly faced with the problem of being able to produce and harvest food for their families.

Although Kenya has set up affirmative action policies related to gender, including the National Gender and Equality Commission (NGEC), women continue to face discrimination, pointing to a need for greater cultural and community-level changes. Photo: Alice Lesepen 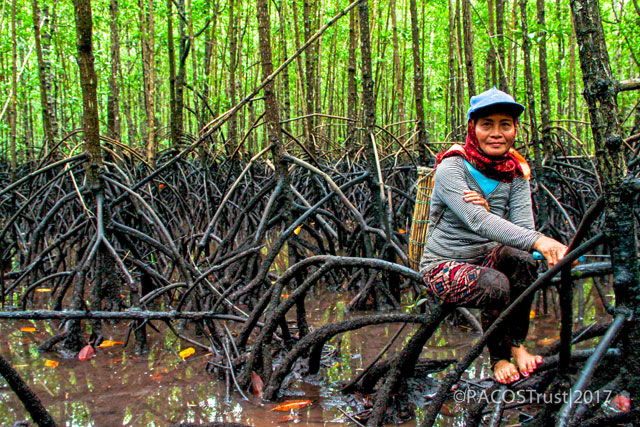 A Sungai Tombonuo Indigenous woman from Malaysia resting after gathering shells in the mangrove forests. The Sungai Tombonuo depend upon the dense mangroves in their traditional territories for food, fuel wood, medicinal plants and spiritual rituals. They identify and manage areas for conservation and sustainable use based on traditional knowledge and practices. The women in particular hold knowledge about different plants, food and medicinal herbs, and have been conserving and replanting these plants to regenerate them. More recently, industrial shrimp farming is threatening the mangroves and the livelihoods of the Indigenous communities and the women in these areas. Photo: PACOS Trust 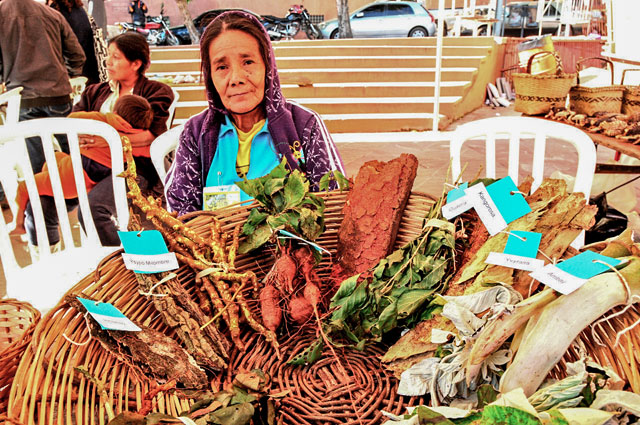 Attending her stall at a native seed fair called “Heñoi Jey Paraguay” in Paraguay, this Indigenous woman displays the great variety of local vegetables that she has conserved at her farm. She brought them to the fair to share with other women. Women are the principal conservers and savers of native seeds around the world and hold key knowledge about agrobiodiversity conservation. Photo: Nadia Lopes 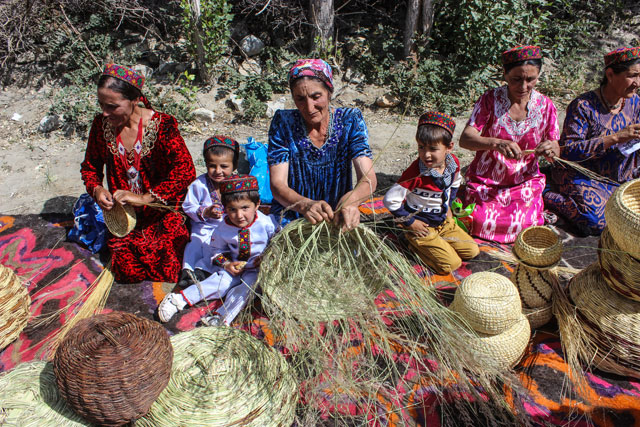 These are Indigenous women from the mountainous area of Darvoz in Tajikistan. They are displaying their craftwork and household wares traditionally made by women. They prepare these products using locally available materials. They learn to create beautiful wicker-baskets from an early age, and from one generation to the next, woman transmit the secrets of their art. These products are an important source of income for women. Photo: NOOSFERA 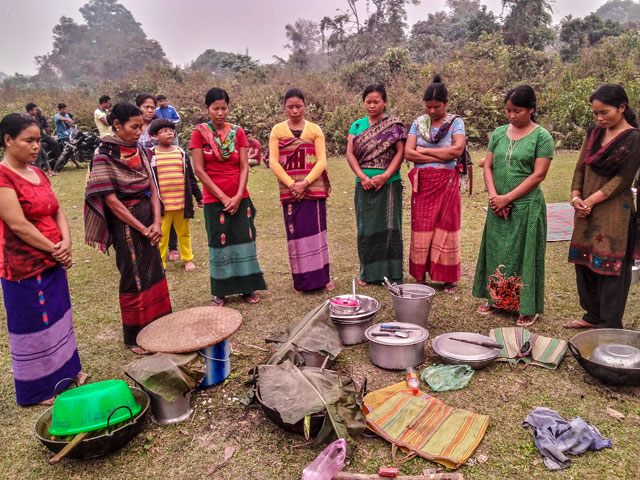 A prayer of gratitude before the feast. These are Rabha Indigenous women from the Buxa-Chilapata forests in West Bengal. Rabhas traditionally practiced swidden agriculture and knew the controlled use of fire to preserve the biodiversity of land and forests. They have very close cultural ties and a symbiotic relationship with forests. But after the creation of tiger reserves and a national park in their forest, most of them were evicted and constantly find themselves in clashes with officials in order to access the forest for their livelihoods. Women who go in to the forest to collect fuel wood and fodder are facing harassment from both the forest guards and security forces.

The Rabhas are traditionally a matrilineal community, but their role is changing. With the invasion of patriarchal values, the customs and traditional practices during festivals and in marriage are changing. With men increasingly making decisions, women are more and more drawn into household responsibilities and child rearing. Though the Rabha women are still involved in agricultural activities and fuelwood collection, it only increases their work load.

These Rabha women strongly feel that the state laws must respect their traditional rights and access to the forests. They also demanded a role in decision-making in local development plans. Photo: Souparna Lahiri 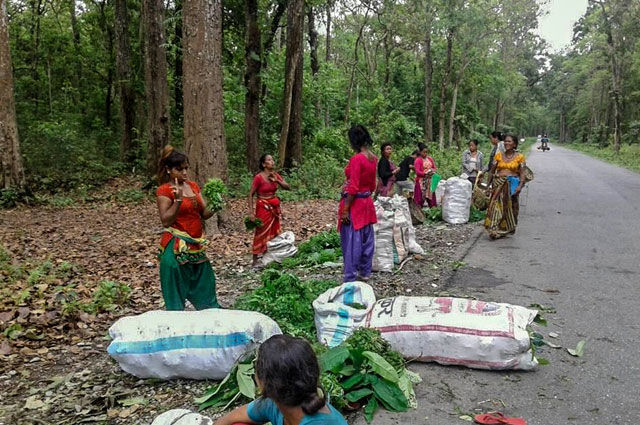 Women members of community forests are collecting Niguro or wood fern in Morang district of Nepal.

These women are part of Community Forest Users Groups, which are part of the state’s efforts to promote community forestry in Nepal. These community groups control certain parts of the forests and have played an important role in the conservation of biodiversity and ecosystems. About 1,000 of 13,000 groups are women-led, though women face obstacles and a patriarchal attitude. One of the local women leaders said, “Political leaders try to obstruct us women from leadership positions, even though our group has established a practice of equal leadership of women in community forest.” Photo: FECOFUN Morang 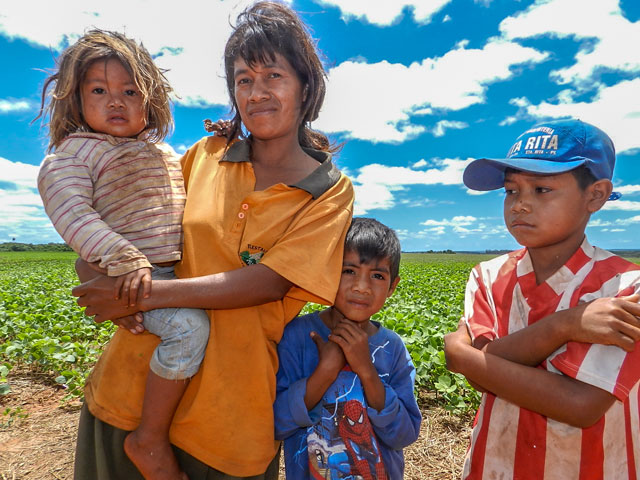 Pictured here is a woman with her children living with industrial soy production in Paraguay.

Communities in Paraguay are being confronted by industrial agriculture and poor governance. The country’s forests have been devastated in the race to free up land for large-scale, export-oriented agricultural production — especially of genetically modified soybeans and beef. The toxic chemicals that are applied to the soy affect the community’s crops, domestic livestock and income. They also cause people to fall sick, and in some extreme cases, cause death. Women are the main victims, disproportionally affected by these pressures as they are often responsible for meeting the food, water, education and health needs of their families. Violence against women is also a key concern in these communities. Women are now developing tools to address this, such as women’s brigades and strikes. On the back of such devastating environmental degradation, women are responding by pushing for access to land, and agroecology as a way to feed their families healthy food. Photo: Luis Wagner 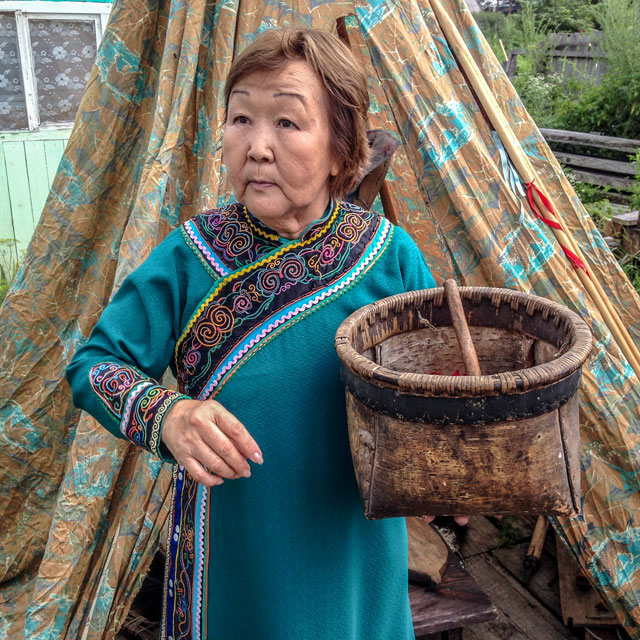 This is Raisa Andreitzeva, a community leader of the Udege Indigenous peoples of Russia. The Udege inhabit the Ussuri Taiga — a temperate forest on the Sikhote-Alin Mountains in eastern Russia. This area contains the highest biodiversity in boreal Asia, including the endangered Siberian tiger and many other rare species of fauna and flora. The area now faces rapid expansion of industrial logging, hunting, salmon fishing, mining and industrial development. As a result, the Udege communities — traditionally dependent on wildlife, fish, wood and non-timber forest products — are suffering from strong competition over the resources that sustain their livelihoods.

Udege women have equal rights to men. As men are often away for long periods hunting or fishing, it is the women who are at the forefront of defending their territories and play a significant leadership role in dealing with officials, regulations and documents. They tend to be much more aware of legal details and specific problems of fish and wildlife use and management, and often fulfill leadership positions in communes and associations like Raisa, pictured here. Photo: BROC 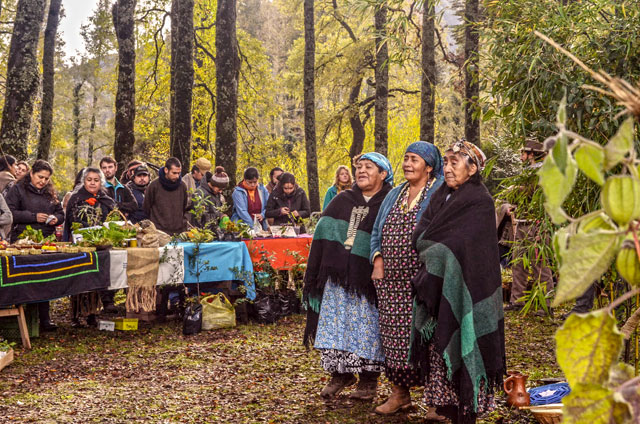 This is the “Trafinktu” ceremony, an ancestral Mapuche gift exchanging ceremony for sharing knowledge and seeds, initiated by women. In this photo, women welcome each participant asking what they have brought with them to share with others.

These are Mapuche women from the Chanlelfu community. They have a particular relationship with the forest, from which they obtain food (mushrooms, fruits), medicine and supplies for their handicrafts. The women maintain and protect water sources and special sectors where medicinal plants grow, called “menocos.” They are rescuing and growing wild plants like rosehip and other herbs. They also conserve sacred places which have a special spiritual significance to the Mapuche.

Today, with the spreading of eucalyptus forest plantations, women explain that the forest is being destroyed. Eucalyptus dry the earth and pollute the air and water by the use of chemicals. The agricultural productivity is deteriorating, and people are getting sick. Photo: Carolina Lagos 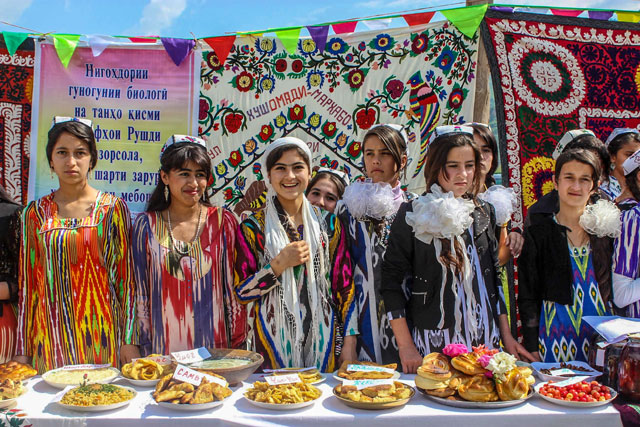 Young girls from the Dashti-Jum community in a remote mountainous area of Tajikistan display traditional foods at an event on the International Day for Biological Diversity. The community has organized traditional ceremonies to value their natural heritage.

Tajikistan has high levels of violence towards women, and access to education for young women like these is scarce. Many women work in agriculture or do unpaid housework and have few opportunities to earn an independent livelihood. They also face limitations in their access to forests for collecting fuel wood and non-timber forest products on which their livelihoods depend. The government has started to prioritize girls’ education, and many young women are now entering sectors like health care and education. Photo: NOOSFERA

Share
Copyright, Truthout. May not be reprinted without permission.
Members of Women2030

The Women2030 Programme is a coalition of five women and gender network organisations collaborating to realize the Sustainable Development Goals (SDGs) in a gender-equitable and climate-just way. Follow Women2030 on Facebook and Twitter.

The Women2030 Programme is a coalition of five women and gender network organisations collaborating to realize the Sustainable Development Goals (SDGs) in a gender-equitable and climate-just way. Follow Women2030 on Facebook and Twitter.