What will happen when technology replaces people in the service, manufacturing and professional industries of an already struggling economy? In their new book, Robert W. McChesney and John Nichols explore the possibility of reclaiming the future for the people, before it’s too late. Noam Chomsky calls People Get Ready “lucid and informed” while Thom Hartmann says it’s an “essential book.” Get your copy by making a donation to Truthout today!

The following is an excerpt from People Get Ready: The Fight Against a Jobless Economy and a Citizens Democracy:

The growth in the economy’s capacity to produce since the 1930s, or even the 1960s, has been extraordinary, much as these economists anticipated. If the experts we used as counsel for this chapter are anywhere near accurate, the next four or five decades could make the twentieth century look like the twelfth century.

In popular economic theory, such revolutionary increases in productive capacity are supposed to translate into higher living standards, much shorter workweeks, richer public infrastructure, and a greater overall social security. Society should have the resources to tackle vexing environmental problems with the least amount of pain possible. In fact, however, nothing on the horizon suggests that this is in the offing. As automation and computerization take productive capacity to undreamed-of heights, jobs grow more scarce and are de-skilled, many people are poorer, and all the talk is of austerity and seemingly endless cutbacks in social services. There is growing wealth for the few combined with greater insecurity for the many. Washington, we’ve got a problem. 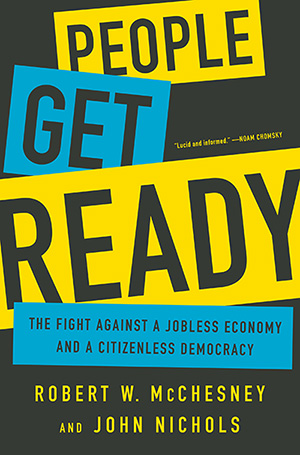 (Image: Nation Books)The false assumptions, of course, are that the benefits of the technology accrue to more than the owners of the firms deploying the technologies. And also that capitalists have incentive to produce far more than they do to satisfy the needs of people worldwide. In fact, Veblen had it right: capitalists produce as much as they do only as long as it remains profitable to do so. Producing more than that lowers prices and lessens profits. In short, to follow Keynes’s logic to a place he did not go, capitalism would seem to have little or no reason to exist if the “economic problem” is solved, so it is imperative that the economic problem remain. For business and wealthy investors to continue to win, everyone else has to lose.

In our view, the evidence points in one direction: the economy needs to be fundamentally reformed, if not replaced. Capitalism as we know it is the wrong economic system for the material world that is emerging. This is a radical conclusion, but it is not made merely by radicals. The number of true believers who think leaving firms and wealthy investors alone to do as they wish will ultimately solve the employment problem and give us a great economy that can be the foundation for a vibrant democracy is shrinking, primarily because it is a faith-based position. There are also some who have a similar faith that technology is innately progressive and all-powerful, so it can and will solve capitalism’s problems for us. They tell us that all we have to do is get out of the way, make some fresh popcorn, and grab a front-row seat as the future unfolds.

But researching this book, what has been striking to us is that many, perhaps most, of the people who have studied these matters — from across the political spectrum — recognize that if the system is left alone, it will not right itself. Instead, structural changes are needed, and government will have to play the central role in determining and instituting these changes. Even those who believe that the existing capitalist system provides benefits that make it worth saving realize that significant reforms and government policy interventions are necessary to prevent intolerable outcomes. “It’s time to start discussing what kind of society we should construct around a labor-light economy,” Brynjolfsson and McAfee conclude. “How should the abundance of such an economy be shared? How can the tendency of modern capitalism to produce high levels of inequality be muted while preserving its ability to allocate resources efficiently and reward initiative and effort? What do fulfilling lives look like when they no longer center on industrial-era conceptions of work? How should education, the social safety net, taxation, and other important elements of civic society be rethought?”

Where markets and business and private investment figure into the new economy is a matter to be studied, debated, and resolved; we only know that it cannot be the same as what we have had for generations. The solutions to the employment and economic crises in the United States are political. The great debate is over what types of reforms there should be, and what type of system we should end up with. A core responsibility of the democratic state is to provide the ground rules and basis for an economy that will best serve the democratically determined needs of the people. An unavoidable part of this debate is to take up the issues last taken seriously in the 1960s: How should technology best be deployed to serve human needs? Never has the need for such a democratic debate and policymaking been greater than it is today.

Copyright (2016) by Robert W. McChesney and John Nichols. Not to be reprinted without permission of the publisher, Nation Books.

Robert W. McChesney is the Gutgsell Endowed Professor in the Department of Communication at the University of Illinois at Urbana-Champaign and the author or editor of 23 books. His work has been translated into 30 languages. He is the cofounder of Free Press, a national media reform organization. In 2008, the Utne Reader listed McChesney among their ’50 visionaries who are changing the world.’