In researching the biological effects of the millimeter wave scanners used for whole body imaging at airports, NaturalNews has learned that the energy emitted by the machines may damage human DNA.

In order to generate the nude image of the human body, these machines emit terahertz photons — high-frequency energy “particles” that can pass through clothing and body tissue.

The manufacturers of such machines claim they are perfectly safe and present no health risks, but a study conducted by Boian S. Alexandrov (and colleagues) at the Center for Nonlinear Studies at Los Alamos National Laboratory in New Mexico showed that these terahertz waves could “…unzip double-stranded DNA, creating bubbles in the double strand that could significantly interfere with processes such as gene expression and DNA replication.”

In layman’s terms, any time you’re talking about interfering with “gene expression” and “DNA replication,” you’re essentially talking about something that could be a risk to human health.

Never Approved as Safe for Humans

“At first glance, it’s easy to dismiss any notion that they can be damaging,” reports TechnologyReview.com. “But a new generation of cameras are set to appear that not only record terahertz waves but also bombard us with them. And if our exposure is set to increase, the question that urgently needs answering is what level of terahertz exposure is safe.”

And yet no such long-term safety testing has ever been conducted by a third party. There have been no clinical trials indicating that multiple exposures to such terahertz waves, accumulated over a long period of time, are safe for humans. The FDA, in particular, has never granted its approval for any such devices even though these devices clearly qualify as “medical devices.”

(If you try to sell an X-ray imaging device yourself, without FDA approval, you’ll be arrested. So why do these TSA suppliers get away with selling human body imaging equipment that has never been adequately safety tested or approved by the FDA?)

The study cited in the TechnologyReview article mentioned above is visible here.

There, study authors conclude: “Based on our results we argue that a specific terahertz radiation exposure may significantly affect the natural dynamics of DNA, and thereby influence intricate molecular processes involved in gene expression and DNA replication.”

In other words, millimeter wave scanning devices may damage your DNA. 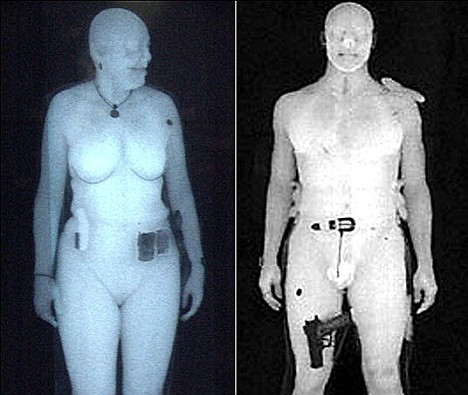 (These images depict what the TSA sees when air passengers are subjected to full-body scans using millimeter wave technology and / or backscatter X-rays.)

Could These Scans Cause Cancer and Birth Defects?

Could these scans cause infertility? Cancer? Shortened lifespan? We don’t yet know the answers to these questions, but then again neither does the TSA. This technology is being recklessly rolled out without adequate safety testing that would prove it safe for long-term use.

How many times in the past have the “experts” told us technologies were perfectly safe and then later we found out they were dangerous? X-Rays were once used in shoe stores to see if new shoes would fit the bone structure of your feet. High-voltage power lines are perfectly safe, we’re told — but then why do children who live closer to those lines have higher rates of cancer?

Dentists still claim that mercury fillings are perfectly safe for your health — a preposterous notion — and cell phone companies continue to insist that cell phone radiation isn’t hazardous to your health at all. Time and time again, the public has been lied to by the authorities during the roll-out of some new technology. Why should we believe that full-body scanners are safe when they’ve never been proven safe? Furthermore, there is now reason to believe they may damage human DNA.

What if the experts are wrong about their safety and ten years later we find out that there is cumulative DNA damage that causes infertility and cancer? What if air travelers who subject themselves to this radiation wind up suffering some currently-unknown health condition as a result? At no time in the history of human civilization have large numbers of humans ever been subjected to terahertz bombardment of this type and frequency.

Sure, you can argue that you get more radiation sitting in an airplane at high altitude than you get from a full-body scanner, or you can explain that cell phones emit far more radiation on the whole (which they do, when you’re talking on them anyway). But if there’s one thing we all should have learned about radiation by now it’s that frequencies matter. The terahertz frequencies have never been rolled out en masse in a scanning technology. Who’s to say they’re going to be safe?

What about pregnant women? Can the TSA absolutely guarantee that these full-body scanners won’t damage the DNA of the unborn babies? What if this technology becomes the next Thalidomide and ten months from now women start giving birth to mutant babies who were damaged by terahertz radiation?

I’m not saying this is going to happen, but wouldn’t it be wise to determine the safety of this technology in advance of its global rollout?

As the National Council on Radiation Protection and Measurements admitted in a 2002 report that studied these security devices:

“[We] cannot exclude the possibility of a fatal cancer attributable to radiation in a very large population of people exposed to very low doses of radiation.”

Barring solid evidence of the safety of this terahertz-emitting technology, the TSA would be wise to follow the Precautionary Principle which states that we should err on the side of caution when it comes to the roll out of new technologies. Unfortunately, the TSA appears to be erring on the side of stupidity by subjecting the public to an unproven, “experimental” technology with unknown long-term effects on human DNA.

And here’s the real kicker: These full-body scanners do nothing to stop terrorists because they can’t detect powder explosives in the first place. A determined terrorist can hide all sorts of powder in a shoe, or a sleeping pillow, or a plastic bag sewn into the side of his carry-on luggage. There are a thousand places for terrorists to hide explosives that won’t be caught on full-body scanners, no matter how detailed the images are.

Besides, in order to avoid engaging in child pornography (because these machines offer very detailed depictions of body parts), the rules will allow people under 18 years of age to bypass them. So all you need then, if you’re a terrorist, is a 17-year-old terrorist assistant who can pack explosives in his own underwear.

Radiology experts are claiming that the radiation emitted from these full-body scanners is perfectly safe for you. Then again, they also claim mammograms are safe, and recent science has now proven that mammograms cause cancer.

When it comes to radiation safety, you can’t trust radiologists. They say all that radiation is safe for YOU, but then they flee the room when the X-rays are turned on, ever notice that? They really have zero credibility when talking about the long-term safety of medical imaging devices. Most doctors, similarly, don’t have any real clue how much radiation is emitted by a CT scan!

“The health effects of the more common millimeter-wave scanners are largely unknown, and at least one expert believes a safety study is warranted.

‘I am very interested in performing a National Council on Radiation Protection and Measurements study on the use of millimeter-wave security screening systems,’ said Thomas S. Tenforde, council president.”

“Collectively, the radiation doses from the scanners incrementally increase the risk of fatal cancers among the thousands or millions of travelers who will be exposed, some radiation experts believe.”

NYT goes on to state that the TSA has entered into a contract under which it could purchase 900 full-body scanners to be deployed in airport all across the country.