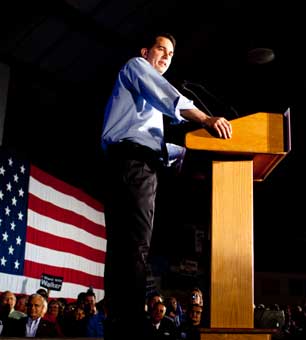 Wisconsin Gov. Scott Walker speaks during his election-night rally at the Waukesha Expo Center in Waukesha, Wisconsin, June 5, 2012. (Photo: Narayan Mahon / The New York times)That Scott Walker survived the recall in Wisconsin is a tragic setback for the stunning citizen’s movement that challenged his extremist agenda in Wisconsin. Its implications are likely to be exaggerated by the right, and underplayed by progressives. Here are some thoughts on its meaning.

1. Extremism will be challenged

Scott Walker is now a conservative hero. The right’s mighty Wurlitzer will argue that Republican Governors and legislators will be emboldened because he survived. The attack on public sector workers and basic worker rights, the sweeping cuts in education combined with top end tax cuts, the efforts to restrict voting rights, they will boast, will now spread even more rapidly across the country.

Really? Walker barely survived the backlash his policies caused. He lost effective control of the Senate even before last night’s recall returns are known. He had to go through a brutal recall, and watch his popularity plummet. I suspect that most Governors with a clue will see this as a calamity that they want to avoid. They’ll be looking to find ways to compromise, to avoid this brutal backlash. No question that the Tea Party and big money right will be lusting for more blood. But I suspect that Walker’s travails — and those of Kasich in Ohio and Scott in Florida – will sober Republicans up a bit.

2. This is only round one

That said, progressives should not dismiss the recall as idiosyncratic, dismissing its import since exit polls showed Obama would win the state against Romney, and many voters voted for Walker because they objected to the recall itself, not because they endorsed his policies.

Conservative columnist Russ Douthat suggests that Wisconsin represents the new era of American politics, where scarcity and slow growth limits the ability of politicians to find win-win compromises. Instead, he predicts more of Wisconsin: “grinding struggles in which sweeping legislation is passed by party-line votes and then the politicians responsible hunker down and try to survive the backlash.” As noted above, I think more politicians will seek to find middle ground than Douthat suggests. He, for example, risibly argues that Obama’s first two years were an example of sweeping partisan legislation. In fact, Obama’s two years were devoted to painful efforts to find middle ground – compromising on the stimulus, wasting months on Max Baucus’ phantom health care negotiations with “Republican moderates,” pre-diluting Wall Street reform.

But Douthat is right that the country has to make big choices. Will working and poor people continue to pay the cost for the mess caused by thirty years of failed conservative policies? Or will people succeed in sending the bill to those that caused the mess? Will we continue to see America starve its public services – from schools to health care to retirement security to internal improvements in everything from clean water to sensible energy? Or will we rebuild our commonwealth with fair taxes on private wealth? Will we empower workers to gain a fair share of the profits and productivity that they help to create or will we continue to give CEOs multi-million dollar personal incentives to ship jobs abroad, break unions, cook the books, plunder their own companies to meet short-term expectations? Will America continue to police the world or will we put our attention and priority on rebuilding our own country? Scarcity and slow growth will make choices necessary – and these will be brutal fights, even with moderate leaders like Barack Obama who are looking for common ground.

And in these fights, big money is mobilized to protect its interests. Scott Walker outspent his opponent by more than seven to one. In the post Citizens United world, we don’t even have an accurate count of how much money was spent by outside groups. And money counts. It not only floods the airwaves with ads, but it pays for identifying allied voters, registering them, and getting them to the polls.

Wisconsin is a sterling example of what elections will be: the power of mobilized right-wing and corporate money against the power of mobilized people. The union-led We are One movement that opposed Scott Walker ran a powerful popular mobilization effort. They handed in almost one million signatures on the recall petition, about forty percent of the vote. They knocked on doors and stayed on the phones. But the $47 million that Walker and outside allied groups spent enabled him to frame the election early with unopposed ads, and to gear up his own sophisticated ground operation.

Wisconsin is a clear warning to progressives. We’ll have to work harder, stretch more, educate more, reach out more and build more to match the increasing force of big money.

This flood of money has another corrosive effect. Democratic candidates and causes will seek to be financially competitive. Unions and progressive small donor based operations will be less able to provide the resources needed. Democrats will dilute their agenda, dull their message, in order to appeal for funds from deep pocket donors. So while mobilized money is likely to sharpen the right-wing agenda, it is likely to dull the Democratic response. That puts even more of a burden on building an independent progressive citizens’ movement that can frame the stakes, make the case, and get out the vote.

4. The Potential of Millennials

In Wisconsin, according to exit polls, seniors were 18% of the vote. Walker won 56% of their vote. Young people – aged 18-29 – were only 16% of the vote. They voted for Barrett 51-47%. The turnout – 2.4 million – was higher than it was in the Republican sweep in 2010, but lower than the 3 million that turned out in 2008. In elections across the country, the biggest generation – the millennials – will decide much by how they vote and whether they turn out or tune out. The enthusiasm of 2008 has been lost in the disappointments of the Obama years and the harsh economy that young people are facing. But this is a generation that carries very different perspectives than its boomer parents and grandparents. It is far more comfortable with diversity, far more socially liberal, far more concerned about the environment. The economic prospects of millennials are also far more difficult, as they struggle with the worst jobs market since the Great Depression, declining wages and rising debts. How they react — and how engaged they become in the political process – will say much about the direction this country takes.

Wisconsin showed that unions are still a mighty force in American politics. They were at the center of the We are One movement and drove the recall campaign. As noted, they sent a message to conservative politicians across the country.

That said, Walker won 38% of the vote of people who said they were members of a union household. In an election framed by Walker’s assault on basic worker rights, that is a dispiriting number, not much different than normal election results. Clearly, the divide and conquer tactics of pitting public workers against private workers had some traction. It also suggests that unions have serious work to do in educating and mobilizing their own members about the existential threat that they now face.