Washington – Weekend election results in Greece did little to settle concerns about a Europe-driven global economic slowdown, with investors and analysts shifting attention Monday to Mexico, Spain and the United States for the next steps.

Greek voters, by a slim majority, voted Sunday for the pro-austerity New Democracy party, in what amounted to a referendum on whether to remain in the European Union. But left-leaning parties opposed to belt-tightening together won more votes, suggesting that Greek voters didn’t send a clear mandate and leaving their country still difficult to govern.

As the New Democracy party set out Monday to create a ruling coalition government, investors frowned on the results. After a brief rally, stocks closed down in France, Italy and Belgium. They closed up slightly in Germany and Great Britain. 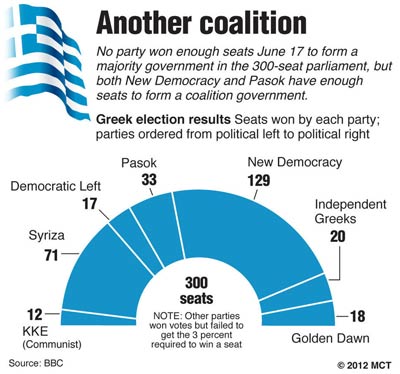 “I think the result was largely anticipated and the markets rallied late last week. The Greek election doesn’t solve the broader issues, either in Greece or Europe more generally, and the market is looking for how those might or might not be solved,” said Donald Kohn, a former vice chairman of the Federal Reserve who’s an analyst at the center-left Brookings Institution.

Investors now are focused on other venues. One is the meeting in Mexico of leaders from the G-20 group of industrialized nations, which began Monday.

In Mexico, leaders are expected to reaffirm steps to stimulate economic activity in order to reverse data that show a deceleration of economic growth in developed and developing nations alike. President Barack Obama, after a meeting with Mexican President Felipe Calderon, said leaders were concerned about a global slowdown.

“A lot of attention has been centered on Europe. Now is the time, as we’ve discussed, to make sure that all of us join to do what’s necessary to stabilize the world financial system, to avoid protectionism, to ensure that we are working hand in hand to both grow the economy and create jobs while taking a responsible approach long term and medium term towards our fiscal structures,” Obama said.

The results of the Greek elections, Obama said, were important so that Greece can “continue on the path of reform, and do so in a way that also offers the prospects for the Greek people to succeed and prosper.”

Still, the markets looked right past Greece on Monday to larger European economies such as Spain, where the cost of borrowing for the government continues to rise dramatically. Spain’s borrowing rate – the amount it must pay investors who purchase Spanish government bonds that mature in 10 years – hit a record high of 7.17 percent Monday. That compares with 1.58 percent for 10-year U.S. Treasury bonds.

When borrowing costs in Greece and Portugal hit the 7 percent levels, European Union-aided government bailouts were necessary. Spain’s economy is much larger, however, and while Spain announced plans two weekends ago to inject capital into its struggling banks, details remain vague pending the results of independent auditors, expected late this week.

“Yields on Spanish and Italian bonds have gone up for the same reason that German yields have been falling: There is little faith that a comprehensive solution to the crisis is being prepared,” analysts at HSBC Global Research in London wrote in an investment note Monday.

Global financial markets are expected to remain jittery until the European Council meets at the end of June. European leaders are considering a plan to insure bank deposits, similar to the U.S. Federal Deposit Insurance Corp. They’re also weighing a centralized bank-supervision structure that would supersede the ability of individual countries to regulate their biggest banks. Both steps would help calm fears of bank failures.

Europe’s problems are weighing down the U.S. recovery, and there’s renewed pressure on the Federal Reserve to do more to spark hiring after three months of poor results and signs of new stress in the weekly numbers for first-time unemployment claims.

Arguments from Fed governors “in favor of doing something are going to be delivered more forcefully than they were before,” Kohn said, declining to predict what might be announced Wednesday at the end of a two-day Fed meeting.

Many Fed analysts, however, expect it to announce the extension of a $400 billion bond-buying program called Operation Twist, now set to expire this month.

Under Twist, the Fed has been selling short-term securities and buying longer-term ones with the intent of driving down the interest rate the government pays on its bonds of longer duration. That could lower borrowing costs for a start-up business, and for consumers when buying homes, cars or taking out other long-term loans.

Analysts are speculating that the Fed could sell short-term bonds and purchase bonds backed by pools of mortgages Wednesday, helping to stimulate the sluggish housing sector and make it easier for Americans to buy and sell homes.

For investors, it’s one more sign of a confusing landscape.

“Like extreme sports, investing has become a death-defying undertaking,” Ed Yardeni, a veteran Wall Street analyst, said in a note to investors Monday. “Don’t you miss the good old days when investing was about investing?”

Share
© 2017 McClatchy-Tribune Information Services. Truthout has licensed this content. It may not be reproduced by any other source and is not covered by our Creative Commons license.
Kevin G Hall
Truthout
Share
Reproductive Rights