The establishment survey showed the economy added 175,000 jobs in February, in spite of the unusually harsh weather on much of the country. With modest upward revisions to the prior two months’ data, this brings the 3-month average to 129,000. While this is considerably weaker than the fall months, weather has undoubtedly played a role in slowing job creation. (In contrast to the prior two months, February’s weather was unusually harsh.)

The mix of jobs in February was somewhat peculiar with the professional and business services category accounting for more than half of the total (79,000 jobs). This was driven in part by an unusual jump in accounting bookkeeping services of 15,700 jobs, which partially offset a decline of 30,800 reported in December. While the more skilled portion of this sector (computer and management services) has been showing healthy growth, growth in the less skilled portion has been especially strong. Temp agencies added 24,400 jobs in February and 227,700 over the last year. Services to buildings (e.g. custodians) added 11,400 jobs last month and 66,700 (3.6 percent) over the last year. 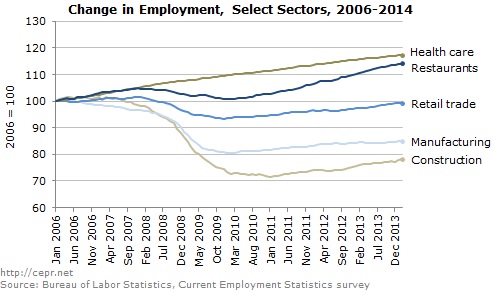 Manufacturing employment has slowed to a crawl. The sector added 6,000 jobs, with downward revisions bringing the three month average to just 6,300. There were downward revisions to retail with a loss of 4,100 jobs following a loss of 22,600 in January. In addition to the weather, this likely reflects changed seasonal hiring patterns.

Health care employment remains on a slower track, with the sector adding 9,500 jobs in February bringing the three month average to 5,900. The government sector added 13,000 jobs, with gains at the state and local level offsetting the loss of 6,800 jobs. Non-postal federal employment is now down by 72,900 (3.5 percent) over the last year.

The motion picture industry lost 14,100 jobs in February. Employment is down by 56,600 (15.5 percent) over the year, hitting its lowest level since June of 1995. Construction continued its upswing in spite of the weather adding 15,000 jobs. Unemployment in the sector is actually below pre-boom levels, with the unemployment rate averaging 12.6 percent in January and February compared with 14.0 percent for the same months in 2003.

The average hourly wage for all workers increased at a 2.3 percent annual rate in the last three months compared with the prior three. Interestingly, wages for production and non-supervisory workers rose somewhat more rapidly, growing at a 3.3 percent pace over this period. This implies that less educated workers seem to be doing somewhat better in the current economy, the opposite of the skills shortage view that is widely being promoted.

The household survey showed the unemployment rate sliding up to 6.7 percent. The big losers for the month were African American men, who saw a jump in their unemployment rate from 12.0 percent to 12.9 percent, the same as the January 2013 level. The EPOP for African American men is now 58.0, down more than 8.0 percentage points from pre-recession peaks. These numbers are erratic, but the general trend here has not been good.

By education level the big losers were those with college degrees who saw their unemployment rise from 3.2 percent to 3.4 percent. This compares to a pre-recession of level of just 2.0 percent. The number of workers involuntarily working part time fell by 59,000 in February, the lowest level since October of 2008. As happened in 2013 the duration measures of unemployment rose in February after falling sharply in January. This is explained by the shortening of benefit duration at the start of the year which leads many workers to drop out of the labor force. The percent of unemployment attributable to job leavers edged down to 7.8 percent, well below the average for 2013 and not much above the low of 5.5 percent at the trough. (By comparison, the pre-recession levels were close to 12.0 percent.) This doesn’t show confidence in the strength of the labor market.

It is difficult to determine the impact of the weather, but it is likely that we will continue to see a moderate pace of improvement in the job market in the months ahead. The recent wage growth is good, but still may prove anomalous.