Across the US, professors and staff are facing not only a crisis of state divestment, but also lack of job security and the growing cost of living. Many labor groups challenge administrations and public officials in a fight for their labor and others succeed in their struggle. The only question is: “What’s next?”

On June 16, 2016, the City University of New York (CUNY) and the Professional Staff Congress (PSC) announced, after six years of negotiating, a contract deal for CUNY employees.

“We were able to negotiate a strong, imaginative contract in a period of enforced austerity for public workers because our members mobilized,” PSC President Barbara Bowen said. “The fight for our contract was a fight for investment in quality education at CUNY.”

The PSC, representing more than 25,000 professors and staff at CUNY, bargained with the administration since the last contract expired on October 19, 2010. But the union struggled in getting a deal. After not receiving an offer in the first five years, it escalated its tactics to force CUNY to make a suitable offer.

On November 4, 2015, more than 50 members were arrested in front of CUNY’s central office in Manhattan. The administration did offer a deal, but it was rejected by the leadership.

Later that month, the union notified members of a strike authorization vote if CUNY would not provide an adequate offer. The administration, in response, filed an impasse to the state’s Public Employment Relations Board and cited the vote as a main reason. This led to an appointed mediator to become involved in negotiations.

In April 2016, a majority of members authorized use of a strike with the union leadership campaigning for it as way to obtain a contract. New York State bars strikes by public employees, according to the Taylor Law.

Yet a strike was not necessary, which brought relief to PSC and CUNY officials such as Chancellor James Milliken.

“This agreement provides not only a much-needed increase in pay for our many faculty and staff, but also it includes additional provisions important to CUNY’s competitiveness for talent at all levels,” Milliken said.

“The PSC Doesn’t Represent Adjuncts at All”

The contract, which begins from October 20, 2010, to November 30, 2017, increases salaries, compounded, by 10.41 percent with retroactive pay. In addition, it expands health insurance for adjuncts, creates a committee to reduce teaching hours, provides a signing bonus and more.

Sharon Persinger, secretary of the PSC, told Truthout there are other benefits for employees separate from pay. For example, librarians would receive more leave time, and higher educational officers, essentially administrative employees, have more opportunities for promotions.

“There are a number of groups who will have a number of changes in their work conditions that just don’t have to do with their increased salary,” Persinger noted.

Yet worries persist about whether this agreement is enough. The CUNY Adjunct Project, an adjunct-led group at CUNY, recommended PSC members reject the deal.

Rafael Mutis, coordinator for external organizing for the group, told Truthout that the deal is worse than the Adjunct Project expected, since it did not address major issues for adjuncts, such as parity between full-time faculty and adjuncts.

Other issues include pay for office hours, across-the-board pay raises for adjuncts and eliminating the 9-6 rule. The latter restricts adjuncts to teach at maximum nine hours at a college and six hours at another.

“Some of those are the main issues we wanted them to deal with, and it’s clear once again the PSC doesn’t represent adjuncts at all,” he said.

Mutis explained that the 10.41 percent increase “looks good on paper,” but inflation and cost of living in New York City is higher than that. Moreover, he said the contract would help full-time faculty more than adjuncts.

Adjuncts are paid nearly $3,000 per course, in contrast to a salary of at least $45,000 per year for full-time professors. In addition, there are far more part-time professors than full-time faculty teaching at CUNY.

A group of adjunct professors and supporters demonstrated in front of the PSC’s offices in downtown Manhattan to urge a no vote on July 14, 2016. They also picketed in front of CUNY’s offices on July 28.

At the former rally, as most people walked past them, a dozen of adjuncts held picket signs and chanted “Shame on CUNY!” and “No CUNY pay cuts!”

Emelyn Tapaoan, a PSC member since 2005 and an adjunct voting “no,” said the multi-year appointment would not help her or other adjuncts who have taught for many years. She explained they move from one college to another, which is not counted in the new rule.

“What’s the use of the multi-year appointment? We want pay equity. We don’t like that multi-year crap that’s only rhetoric,” she said.

Bowen also felt disappointed in the contract as CUNY should have done more to help adjuncts. Nevertheless, she supports a “yes” vote based on the benefits attained for members. 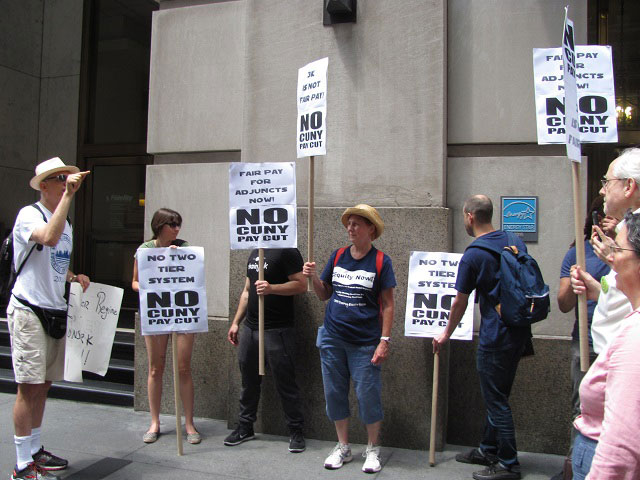 Yet other adjuncts support the contract. Michael Batson, an adjunct at the College of Staten Island and Kingsborough Community College, told Truthout he was ambivalent about the deal, but felt relieved it was done. Thus, he is voting “yes.”

He understands why some adjuncts feel upset and are opting for a “no” vote. However, he noted the demand for pay parity would need more funding from the state.

“We need to build for it, but that’s going to require a really heavy lift. It requires CUNY to move, but also it requires to getting the state to shift on their funding,” Batson said.

New York State’s government gradually reduced funding for CUNY since the 1980s. However, over time, the university system gradually relied more on tuition to cover its expenses — and that was never enough. An article in The New York Times detailed the damage this lack of funding caused to all 24 campuses.

Earlier this year, the PSC found Gov. Andrew Cuomo, a Democrat, cut per-student funding to CUNY by three percent since taking office in 2011.

In addition, New York City Comptroller Scott Stringer, who testified in Albany on January 26, 2016, highlighted that “if aid to CUNY had grown at the same rate as the State’s operating budget over the last seven years,” the university would have an extra $637 million.

“Colleges and universities play a key role in making New York City a vibrant place to live and work. We should be doubling down on the economic engine of CUNY, not cutting back,” he said.

Bowen noted how CUNY officials said they secured funding from the state to fund the agreement. In the end, the city and the state would both help pay for the new benefits. 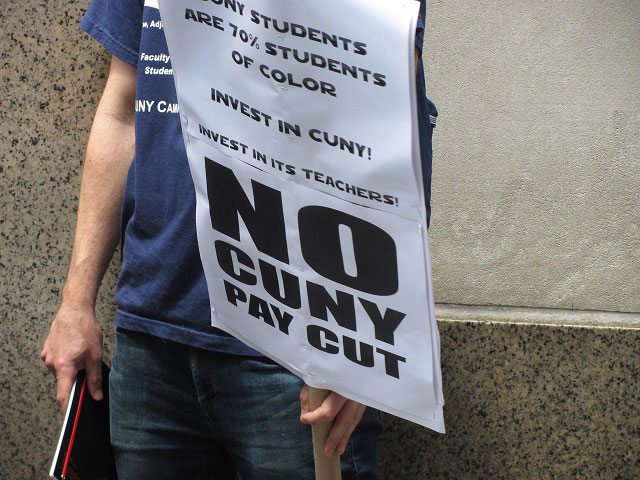 Adjuncts voting “no” on the agreement cite its lack of pay equity as a reason why they oppose the deal. (Photo: Brandon Jordan)

Yet Glenn Kissack, a retiree representative on the PSC’s executive council, said Cuomo’s austerity forced the union to accept the contract. He supported rejecting the deal as he felt it could have gotten a better one.

“Without the credible threat of a strike, there is no other way to defeat the austerity regime that Albany has imposed, and there’s no way to dismantle the … two-tier system in which an increasing proportion of the teaching faculty are underpaid,” he said.

Building for the Future

James Davis, a full-time professor and chair of PSC’s Brooklyn College chapter, understands frustrations among adjuncts voting “no.” In fact, Davis worked for a few years as a part-time professor.

But he is supporting the agreement, and believes full-time workers should work with their adjunct faculty for a better contract next year.

“Do I think [the deal is] perfect? Far from perfect. The alternative is to extend the drought we’ve been in and to say the rest of the membership: You’re going to have to go on strike, basically,” he said.

Davis said organizers should focus on austerity that plagues CUNY. He cited the state’s role in being an obstacle in talks between the administration and the union. Approving the deal would be the first step in mobilizing members.

“The question is strategic: What is the best way going forward to send a message and organize for something better? A vote ‘no,’ even though it would be a large number for them, I don’t know if it would help anyone,” he said.

The union would face a major challenge in the form of the CUNY administration and state government in eliminating problems such as a two-tier wage system and state divestment.

“CUNY’s history is one of being underfunded by the state, always, from the beginning. We have a tall task. We’re a city university that has been not a priority for the state. Currently, the state is very much opposed to a vision of a public university that is low or free,” he said.

Results of the vote are expected on August 4. The deal is enacted if a majority approves it. The contract already passed both the PSC’s Delegate Assembly and CUNY Board of Trustees on June 23 and 27, respectively.

Rachel Yoeuns, an adjunct voting “no,” said this is not a black-and-white issue. Rather, there are many reasons to support either side.

“People have to vote with their conscience. I’m voting ‘no’ as a symbolic ‘no.’ I’m not voting to defeat the contract, I’m voting because the PSC needs to recognize adjuncts as a meaningful constituency,” she said.

Share
Copyright, Truthout. May not be reprinted without permission.
Brandon Jordan