© 2022 Truthout
Meredith West’s former husband suffered a massive stroke in 2003 when he was just 34 and has since won a settlement in a malpractice suit that, along with disability insurance and Social Security, keeps the family afloat on a single income despite staggering medical costs. West gets child support from her husband because of the malpractice settlement.
“I know there are divorced moms out there who are relying solely upon that Social Security check and I can’t imagine what they’re going through,” West told Truthout. “The reason I’m involved is because I’m so grateful.” 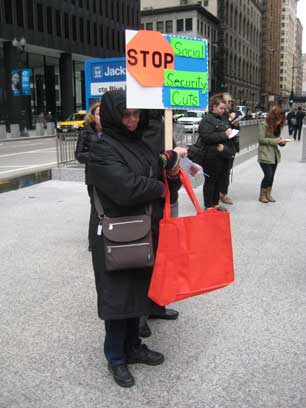 A protestor in Chicago’s Daley Plaza says no to Social Security cuts while fellow dissenters deliver petitions to Senators Mark Kirk and Dick Durbin on April, 2013. (Photo: Claire Glass)A group of activists, including West, gathered at Chicago’s Daley Plaza on Thursday, April 25, to deliver petitions to the offices of Illinois Sens. Mark Kirk (D) and Dick Durbin (R) against cuts to Social Security through a chained CPI. The documents combined contain nearly 1,400 pages of signatures of Illinois residents who support cuts to the bloated Pentagon budget instead of Social Security, our country’s widest social safety net.
The action doesn’t seem to attract much attention from passersby, save for the occasional fist pump or honked horn. Meg Welch, MoveOn organizer and federal employee of a social service agency, said that this seeming disinterest is a symptom of the way these cuts have been marketed to the American public.

“Chained CPI is a real cut,” Welch told Truthout in a phone interview after the rally. “It’s not just tinkering with your cost of living. Social Security is the largest safety net in the country. It keeps people from being on the street. This is subsistence for people who don’t have alternatives.”

Chained CPI would mean a shift in the way inflation and cost of living increases are factored into yearly growth in Social Security and disability benefits. Chained CPI would enact a measurement of inflation that has increased at 0.3 percentage points less than the current measure annually, lowering benefits for all Social Security recipients incrementally. To make matters worse, even current methods to calculate inflation do not factor in rising medical costs, on which the elderly spend 20 to 40 percent of their incomes.

Put that way, the change might sound small, but according to University of Chicago health policy and public health professor Harold Pollack, the loss would be significant:

“Someone who is going to live into their 90s, if you adjust their benefit through chained CPI, is going to have a significant problem when they get older,” Pollack said. “You can be on Social Security for 25 or 30 years and the oldest are running out of money and quite sick. The value of their benefits would be eroding over time with a chained CPI.”

West, along with another rally member, hand-delivered the petitions to the senators’ representatives above Daley Plaza at 230 S. Dearborn Street. A staffer in Senator Kirk’s office accepted the documents without allowing for further discussion. In Durbin’s office, however, West spoke with a representative whom she described as highly receptive and who assured her Durbin does not support any cuts to Social Security.

Once downstairs, her report was met was immediate skepticism from Welch and others in the group who said that the administration and senators who support the chained CPI do not refer to that action as a cut in order to sidestep the term’s stigma through semantics.

“I had been feeling very hopeful about the conversation, and then when we went downstairs and heard potentially it was doublespeak, I felt deflated,” West said. “I don’t even know how we’re having that conversation; I’m completely blindsided. The idea that a democratic president would undermine the foundational democratic policy that his party was founded on has completely deflated me.”

Connie Bacon was ready for doublespeak, or potentially, complete dismissal when her colleagues ascended to deliver the lengthy documents. She’s been on Social Security since a bike accident in 2008 forced her to leave a position she’d held for 13 years as an adjunct professor at a liberal arts college. With medical bills (and old student loans) totaling three times her salary, Bacon checked into a homeless shelter in 2010. She said her shame was crippling.

“My demographic is especially good at hiding,” Bacon told Truthout on Daley Plaza. “If a former or potential employer were to see me exposed as ‘long-term unemployed,’ or living in a shelter, or having to access my Social Security Insurance, I would be at risk of losing a potential job or a reference. The stigma is that real, that damaging, that internalized. It’s a very efficient silencer.”

Bacon was left in dire financial straights – having to pay $30,000 out of pocket for physical therapy and other costs related to her injury, which anyone riding a bike in a big city could just as easily have sustained. Before the accident she worked at an after-school art program and made campaign signs during the president’s campaign for reelection with the kids.

“I wish I had those posters to send to him now,” Bacon said solemnly.

Disability beneficiaries like Bacon typically start receiving Social Security benefits much earlier than do average Americans, rendering this population particularly vulnerable to chained CPI cuts, which metastasize over time. Many Americans depend on Social Security coverage for medical insurance and to pay the rent, and paid taxes all their working lives to safeguard that option.

“I feel ripped off,” Bacon told Truthout. “I invested my whole life in Social Security.”
At the rally, participants held a banner depicting the United States federal budget distribution across various sectors, including education. The visual displayed in red the nearly 60 percent of the United States federal budget that goes toward defense. Those who spoke on a bullhorn in the plaza, including Welch and West, mentioned the grave disparity, paying particular attention to the mere 4 percent of funds going toward education as of 2010 according to the National Priorities Project.
That particular figure was especially poignant as just a few weeks prior, a massive Chicago Teachers Union protest against the slated closure of 54 public schools passed through the very same part of downtown.
The MoveOn petition, “Cut Social Security & Veterans’ Benefits? Cut the Pentagon Instead!” advocates for military cuts that would be equal to or greater than the amount that would be saved via chained CPI. Some proposed military cuts would prove more expedient and have already been proposed by the military itself.
The chained CPI would save the government $163 billion over the next decade. Just one of the Pentagon’s weapons programs will cost $1.5 trillion. Every year for the last five, the Pentagon has paid its contractors $360 billion – more than all of the Department of Defense’s employees and military personnel put together receive.

Military personnel have urged Congress to allow for the retirement of fleets of useless C-5A transport planes. These jets are too expensive to use but require regular maintenance whether or not they ever make it airborne.

According to Associated Press interviews with military officials, the Navy and Air Force are spending approximately $5 billion to drive these aircraft around bases to make sure the tires aren’t rotting.

What’s more, the Navy planned to retire seven Navy cruisers earlier this year, which would have amounted to $4.3 billion in savings, but Congress insists on keeping the ships sea-ready and has added money to the military budget to pay for it, all the while threatening a presently solvent social safety net on which millions rely.

Pollack said it is irresponsible to threaten Social Security because too many Americans rely on those benefits for retirement. The older recipients get, the more they’d lose, and they’d still be faced with increased medical costs and shrinking savings.

“[Social Security] is the absolute foundation of most Americans’ retirement; they’re dependent,” Pollack told Truthout in a phone interview. “We have to fix it, but we have to fix it in a way that does not reduce people’s retirement security when we know that everything else in the American economy is reducing it.”

Pollack added that lifting the cap on taxable income from $113, 700 would be a tenable fix and would avoid adding to pressures on the poor, elderly, and those currently receiving disability.

Meanwhile, the president’s budget includes $350 billion in cuts to Medicare, $19 billion dollars from Medicaid, and tens of millions from the heating assistance program for low-income Americans (the last cut is a potential cause of health complications).

According to the activists gathered in the plaza, chained CPI violates one of President Obama’s central campaign promises aimed at safeguarding the middle class. Protesters agreed that chained CPI represents too significant a concession to Senate Republicans to entertain. Frustrations were palpable on Daley Plaza and highlighted a sense of confidence shaken as the president continues his second term.
Share
Copyright, Truthout. May not be reprinted without permission.
Claire Glass

Claire Glass is a freelance writer and literary editor for Gapersblock.com