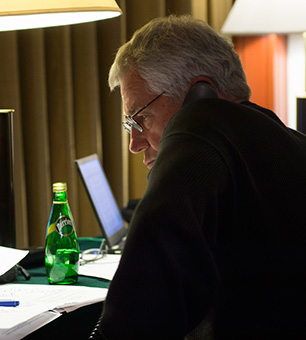 Official DoD photo by Sgt. Aaron Hostutler U.S. Marine Corps (Released).A recent news story in the Global Security Newswire stated, “Top US military leaders are personally reaching out to missileers at the Montana base that has become ground zero for an Air Force probe into exam cheating.” It went on, “Defense Secretary Chuck Hagel on Saturday called six launch officers during their shifts at underground launch control centers, according to a Pentagon press story. Speaking on the phone calls for roughly an hour, the defense chief voiced his assurance that the launch officers were up to the task of carrying out the US nuclear mission, said Pentagon officials.”

One can only imagine what was said in those morale-building talks.

Hagel: Howdy, missileer, this is Chuck. How’s everything down in your bunker?”

MLO: Nice of you to call, sir. I wasn’t expecting it. Are you calling to give the order to turn my key?

Hagel: No, nothing like that. I just want to check in with you and see how your morale is doing.

MLO: My morale is sky-high, sir.

Hagel: You’re not taking drugs, are you?

MLO: Not now, sir. I’m studying up for my next proficiency test.

Hagel: I hope you know that you’re doing this country a great service.

MLO: By studying for my proficiency test?

Hagel: Well, there’s that, but I’m proud of you for being willing to turn your key when ordered and attack our enemies.

MLO: Thank you, sir. I’m ever-vigilant, waiting for my orders.

Hagel: That a boy. Of course, we hope those orders will never come, but we must be ready 24 hours a day.

MLO: Yes, sir, I couldn’t be readier. I dream about being able to blow up the world.

Hagel: That may be carrying it just a bit too far.

MLO: Gotcha, Chuck, I don’t really dream about it. Maybe I daydream about it sometimes. But I’m ready to do it, for my country.

Hagel: That’s the spirit, young man. It sounds like your morale is just fine.

MLO: Just give me the orders, and I’ll be ready.

Hagel: What could I do to boost your morale even higher?

MLO: Maybe you could have some movies for us while we’re on duty. It gets awfully boring down here.

Hagel: Why not? What’s your favorite movie, son?

MLO: Dr. Strangelove, sir. It’s the favorite of all the missile launch officers.

Hagel: Son, it’s been good talking to you.

MLO: And perhaps some munchies with the movies.

Hagel: As I said, it’s been good talking with you.

MLO: And allow us to bring dates into the bunkers for the movies.

Hagel: That’s not going to happen.

MLO: And perhaps an occasional visit by the president or first lady.

Hagel: I’ve got to get on with my next call.

Share
Copyright, Truthout. May not be reprinted without permission.
David Krieger