One thing we keep hearing from political pundits is that the state of the economy should lead to a crushing defeat for President Obama — no president has ever been re-elected with unemployment this high, etc.

But as quite a few better-informed people have pointed out, the political science literature is unambiguous on this point: What matters isn’t the state of the economy, it’s the perception of trend. If the economy appears to be improving, the incumbent tends to do well even if in absolute terms it’s still pretty bad.

By that standard, Mr. Obama is in a much better position than the conventional wisdom would suggest: the economy isn’t booming, but it’s growing, and the labor market is moving sideways rather than down. It’s not President Reagan’s “Morning in America” (which reflects the different and much more intractable nature of the 2008 crisis and aftermath), but it’s not the political disaster you might imagine.

But wait, there’s more: Elections aren’t decided by national popular vote, but state by state. And it seems likely that this election will be decided in the industrial Midwest, Ohio in particular — a region that has bounced back strongly.

Here’s a comparison I haven’t seen elsewhere: the unemployment rate in Ohio under two administrations, on the chart on this page. 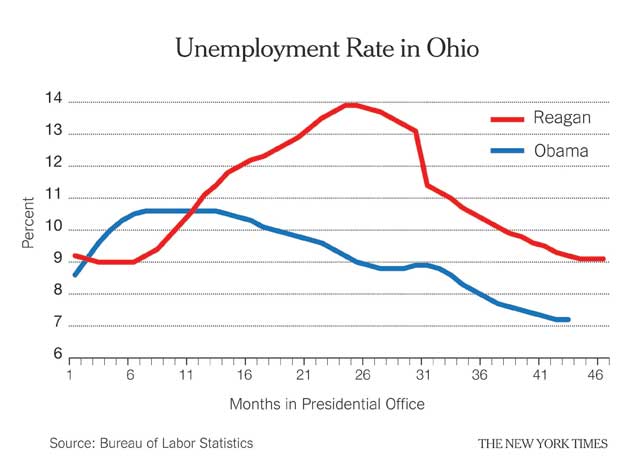 Unemployment was still very high in Ohio when Ronald Reagan was campaigning for re-election. But it was coming down, and most people blamed the previous administration for the surge in unemployment that had occurred before.

And you could say exactly the same thing this time around, with the added twist that much of the good news can be attributed to the auto bailout that Mr. Obama carried out in the face of frantic G.O.P. opposition.

Now, national sentiment matters too, and Mr. Obama obviously can’t run a campaign on boosterism. But the key point is that the economic background isn’t that bad for him politically; it’s good enough, in particular, for him to try to turn this into a “choice” election that his opponent clearly isn’t ready for.

Inflation Expectations: A Feature, Not a Bug

And now for something completely different: I’m a bit puzzled by the tone of a recent article in the Financial Times on how the Federal Reserve’s new policy is doing so far. The headline is “U.S. Inflation Fears Rise After QE3,” and the writer seems to imply that a rise in breakeven rates — the difference between the interest rate on ordinary bonds and inflation-protected bonds — is a danger sign. (Breakeven rates are a simple gauge of expected inflation).

On the contrary, it’s the whole point of the exercise. For almost 15 years, some of us have argued that central banks can gain traction even in a liquidity trap if they can create expectations that money will remain loose after the economy recovers, generating modestly higher inflation. And that’s what the Fed’s new tack is supposed to achieve.

The right headline on that article should have been “QE3 Working So Far.”