By
Ralph Lopez,
War Is a Crime

Well almost standing together. The Worcester Telegram and Gazette reported that Occupy Wall Streeters in Worcester, MA “mostly occupied the north end of the small Federal Plaza Park and Tea Partiers mostly the south” last Friday on Nationwide NDAA 2012 Congressional Protest Day. The protest has been expanded to fall on the first Friday and Saturday of every month at congressional offices across the country. They gathered to protest the National Defense Authorization Act of 2012, which strips US citizens of their right to a jury trial when the government asserts that they are suspected of “support” for “forces” which are “associated” with Al Qaeda. The NDAA allows the US military to detain citizens without charges, counsel, or any contact with the outside world, for life.

In a cruel slap in the face of the American people, Congress passed the law precisely on Bill of Rights Day. Congress's clear intention that the law apply to Americans was on vivid display when it voted down numerous amendments offered to address precisely these concerns. This was even after Sen. Lindsey Graham erased any doubt of the law's intent by saying on the Senate floor that “the statement of authority to detain, does apply to American citizens and it designates the world as the battlefield, including the homeland.”

Mitt Romney openly favored the indefinite military detention of US citizens in a South Carolina debate last month when he said “you don't have a right to join a group that has challenged America and has threatened killing Americans, has killed Americans, and has declared war against America.” Romney did not say who exactly was asking for the “right” to join such groups, nor how it would be determined who had done these things without evidence, charges, or trial.

The roll call votes of congress members for the NDAA are here, “yes” is in approval of military detention of US citizens:

The bill was signed into law by Obama late on New Years Eve, when, as law professor Jonathan Turley said, a high proportion of Americans were probably drunk. The law allows for the round-up and indefinite military detention of US citizens without charge or trial for the “duration of hostilities” in the “war on terror.”

In Worcester there was frank talk and wary across-the-lines feelers and recon between Occupy Worcester and the Tea Party. Worcester Tea Party member Ken Mandile admitted that although there was some “good discussion,” “we're not changing any minds.”

Nevertheless, he said, it is impressive that the groups can put aside their differences to stand for such an important principle as the Bill of Rights. Occupy Worcester's Jonathan Noble said “Even though I feel a little uncomfortable about what they (tea party members) stand for, I think it's kind of a beautiful thing that we can stand together on this.”

The Worcester Telegram and Gazette said that both sides, over 100 people, came together to:

“read in unison the Bill of Rights in the plaza in front of the federal courthouse, under the watchful eyes on three Worcester police officers and two members of Homeland Security's Federal Protective Service. There were no incidents, save for a citation written for defacing public property when an Occupy Worcester member wrote in chalk “Occupy Everywhere” on a column in Federal Plaza.”

The International Business Times reported as the day began:

“NDAA protests have begun at congressional offices nationwide, as opponents look to keep up the pressure on their elected representatives to repeal the National Defense Authorization Act.

The NDAA was passed more than a month ago, but protesters are hoping that with enough public outcry, the U.S. Congress and President Barack Obama may rethink the law.”

“Be it enacted by the Senate and House of Representatives of the United States of America in Congress assembled, Section 1. Repeal of Section 1021 of the National Defense Authorization Act for fiscal year 2012.”

The law's critics contend that the law was cleverly crafted to deceive the American public into believing that indefinite military detention did not apply to US citizens. Part (e) of Section 1021 states:

“Nothing in this section shall be construed to affect existing law or authorities relating to the detention of United States citizens….”

However , legal experts point out that “existing law” is represented by a controversial appellate court decision in the case of Jose Padilla, which upheld the Bush administration's claim of authority to hold US citizens in military detention indefinitely. During the floor debate on NDAA, Sen. Lindsey Graham called the appellate court's decision in Padilla the “law of the land.” But Article VI of the US Constitution, the “Supremacy Clause,” declares the Constitution and the Bill of Rights to be the “Supreme Law of the Land.”

In the Worcester protest City Councilor Konstantina B. Lukes and Ronal C. Madnick, both former executive directors of the local chapter of the American Civil Liberties Union, also attended the rally, as did lawyer and radio host Randy Feldman. For more information on the monthly protests at congressional offices go to the Facebook Nationwide NDAA 2012 Congressional Protests. 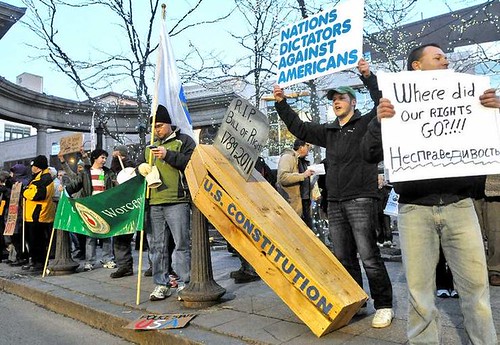 PHOTOS FROM AROUND THE COUNTRY, NDAA PROTEST FEB. 3