© 2023 Truthout
Exposing the wrongdoing of those in power has never been more important. Support Truthout’s independent, investigative journalism by making a donation!

Donaldsonville, Louisiana—Activists are pushing to block construction of the Bayou Bridge Pipeline, a 162-mile oil pipeline that would link the Dakota Access Pipeline that sparked a massive resistance movement in North Dakota to petrochemical facilities and export terminals in eastern Louisiana.

Three water protectors were arrested on Monday after refusing to leave a pipeline construction site in southern Louisiana, marking the first public arrests in the ongoing fight over Bayou Bridge.

Meanwhile, the Energy Transfer Partners (ETP) joint subsidiary behind the project sought to overturn an injunction handed down by a federal district court in Baton Rouge last week, which has temporarily blocked construction in sensitive wetlands as legal challenges proceed. Energy Transfer Partners built the Dakota Access Pipeline in North Dakota that was met with fierce nonviolent resistance from the Standing Rock Sioux and activists across the world in 2016.

About 25 protesters entered the rural pipeline construction site south of Baton Rouge on Monday, unfurling banners and halting work on the pipeline for two hours as police determined how to respond. Three protesters held a sit-in after police asked them to leave the property and were arrested on charges of trespassing, failure to disperse and resisting arrest.

The protest kicked off a week of solidarity actions planned across the country. For many activists, the Bayou Bridge Pipeline represents both an extension of the Dakota Access Pipeline and a real threat to the Atchafalaya Basin, a large and ecologically diverse area of swamps and wetlands that rural Louisianans have long depended on for fishing and other resources.

Pippin Frisbie-Calder, an New Orleans-based artist who was born in Louisiana and is inspired by the state’s wetlands, told Truthout that she decided to participate in the sit-in and risk arrest because activists are running out of other options. Like other activists, Frisbie-Calder showed up to permit hearings, attended rallies, and made calls to voters and politicians asking them to oppose Bayou Bridge, but state agencies are allowing the pipeline to be built anyway.

“I decided to [sit-in and be arrested] because I am a wetland artist, and all of my work focuses on the environment here, and I thought that more people who have their livelihoods dependent on those systems should put their bodies on the line to protect them,” Frisbie-Calder said in an interview. 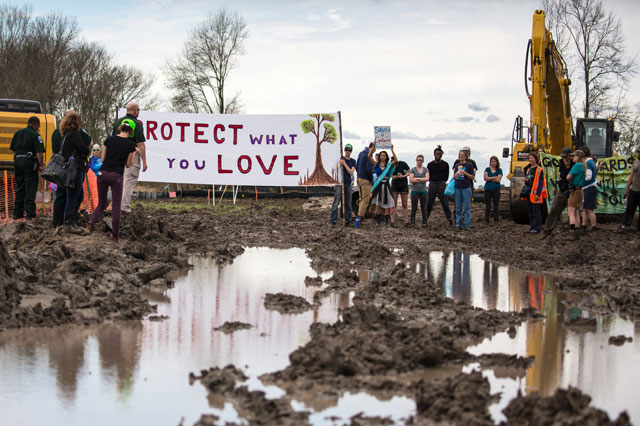 Protesters gather on a Bayou Bridge construction site on Monday, temporarily stopping work after a court injunction ordered the Energy Transfer Partners’ joint venture behind the pipeline to stop construction while it considers a legal challenge from environmental groups. (Photo: © 2018 Julie Dermansky) 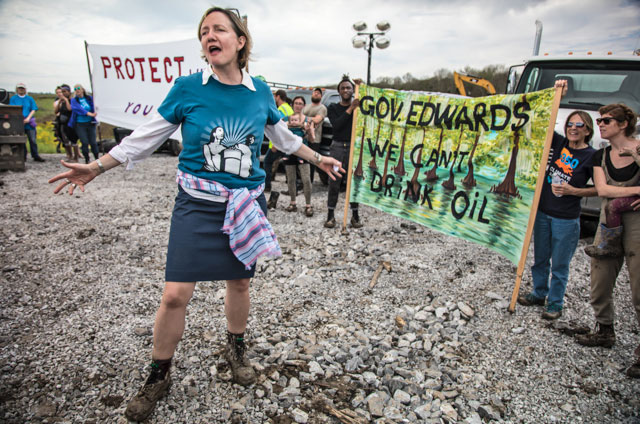 Protesters gather at a Bayou Bridge Pipeline construction site on Monday. The pipeline would run 162 miles across much of southern Louisiana and traverse sensitive wetlands in the Atchafalaya Basin. (Photo: © 2018 Julie Dermansky)

Bayou Bridge, which would connect to a vast pipeline network stretching to oil fields in North Dakota and carry 480,000 barrels of oil a day, is also a potent symbol of the destruction wreaked by the fossil fuel industry, which dominates local economies in southern Louisiana and across the Gulf South. Louisiana in particular finds itself on the front lines of climate disruption as rising seas, intensifying storms and erosion linked to oil and gas development cause coastal land loss at a startling rate.

Like the protest movement launched by the Standing Rock Sioux against the Dakota Access Pipeline in North Dakota that garnered international media attention as activists established a massive protest camp in the face of brutal police repression, the fight against Bayou Bridge is led in part by Native activists and centers their connection to the land and bayous of Louisiana. For example, the pipeline would cross Bayou Lafourche, which supplies drinking water to the United Houma Nation.

“We have lived and thrived in the swamps of Terrebonne and Lafourche Parish for over 200 years,” said activist Rae-Lynn Cazelot of the United Houma Nation, in a statement. “But now our land is disappearing out from under us and our homes and way of life are being threatened yet again.”

Indigenous activists have been pointing to ETP’s actions regarding the Dakota Access Pipeline as an indication of how events might play out in Louisiana.

“Companies just like ETP have come in, exploited our land, poisoned our waters and displaced our people — making billions, then retreating to safety while we’re left with the effects,” Cazelot said. “So why should we believe that ETP, of all companies, would do the right thing after what they did to our brothers and sisters of the Sioux in North Dakota?”

The call to halt the project has rallied local advocates along with activists from across the country, including grassroots organizers who have constructed the L’eau Est La Vie (Water is Life) protest camp along the pipeline route, which stretches across a large portion of southern Louisiana from Lake Charles to the industrial corridor between Baton Rouge and New Orleans.

“We will not allow this pipeline to be built without a fight,” said Cazelot, who organizes with other activists at the L’eau Est La Vie camp.

The Bayou Bridge Pipeline also faces mounting legal challenges. On Friday, a federal judge in Baton Rouge issued a broad injunction blocking construction of the Bayou Bridge Pipeline as the court considers a lawsuit filed by a coalition of environmental groups and local crawfishers challenging a crucial permit issued by the Army Corps of Engineers.

Oil and gas pipelines already crisscross the Atchafalaya Basin, and construction and maintenance of the pipelines creates canals and “spoil banks” that inhibit water flow and reduce water quality, according to the legal complaint. The groups argue that another major pipeline project would do further damage to fishing grounds used by crawfish harvesters and compromise natural flood protection that the wetlands provide to millions of Louisiana residents.

“If the Cajun people of Louisiana had challenged the first pipeline when it came through Louisiana, we wouldn’t be facing the environmental mess that we have in coastal Louisiana and the Atchafalaya Basin,” said Jody Meche, a commercial crawfisherman with the Louisiana Crawfish Producer’s Association, West, in a statement on Friday. 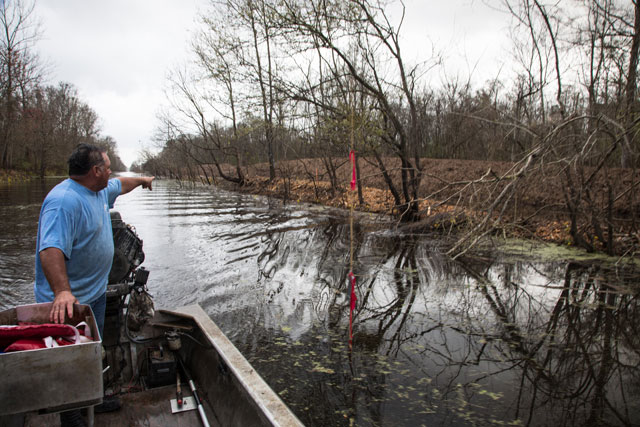 Jody Meche, president of the Louisiana Crawfish Producers Association-West looking at the damage caused by the instaltion of the Bayou Bridge Pipeline, that was shut down on Friday. (Photo: © 2018 Julie Dermansky)

The groups say the Bayou Bridge Pipeline also threatens ancient tupelo and cypress trees that provide migratory habitat for birds. Additionally, the plaintiffs are concerned about oil spills in the sensitive wetlands. Federal data shows that Energy Transfer Partners and its subsidiary Sunoco, Inc. were responsible for more than 300 “significant” pipeline incidents over the past decade, according to the complaint.

The company also argued that the pipeline serves “public interest” because it will create jobs and tax revenues. Protesters had a response: Yesterday, they left a note at the construction site encouraging the oil and gas industry to hire more people to fix the “leaking pipeline, rusty refineries and abandoned oil wells” that litter the Louisiana landscape instead of building new infrastructure. 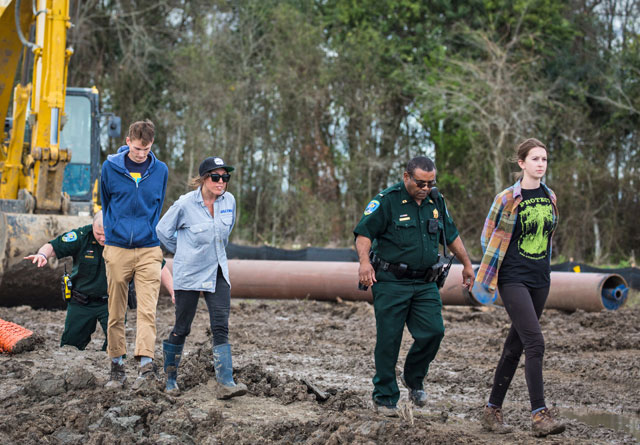