On August 2nd, an estimated 4,200 gallons of crude oil was discharged from a well owned by the Texas Petroleum Investment Company into the mouth of the Mississippi River, according to the US Coast Guard. The Coast Guard and other state agencies are now responding to the third oil spill in two weeks.

Louisiana’s Plaquemines Parish coast was also hit with two oil spills the previous week. An estimated 4,200 gallons of crude oil attributed to oil and gas extraction company Hilcorp spilled in the marsh near Lake Grande Ecaille, part of Barataria Bay, on July 25. Three days later, 850 gallons were discharged by a Texas Petroleum Management flowline into marshland in the Southwest Pass. 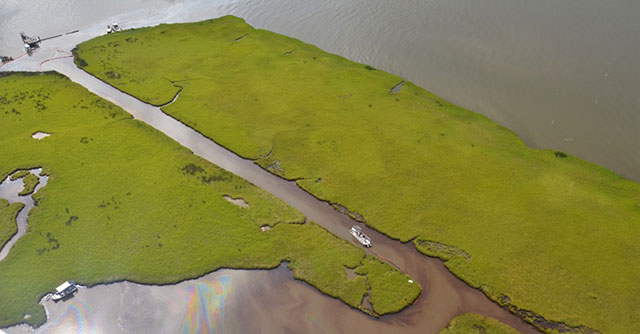 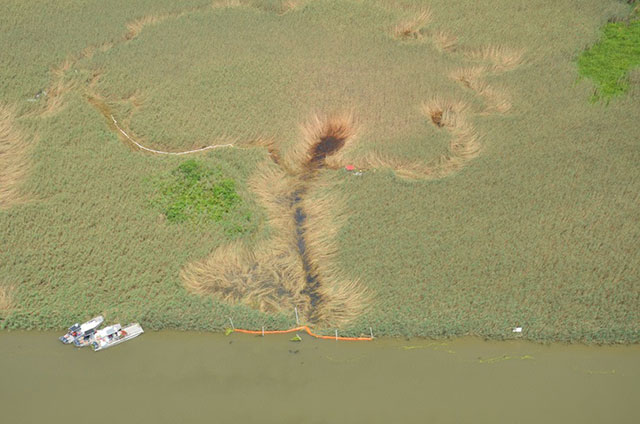 The Coast Guard and Louisiana Department of Wildlife and Fisheries responding to a crude oil discharge near Southwest Pass, Louisiana, July 28, 2016. (Photo: The US Coast Guard)

The same week, Vermilion Parish added its name to the growing list of parishes that have filed lawsuits for damages done by oil and gas companies to the coast resulting in land loss. If successful, the money awarded in these suits will be earmarked for the restoration of Louisiana’s coast, which continues to erode at a rate of more than a football field an hour.

The parish lawsuits do not attempt to get the oil and gas companies to foot the entire bill needed to restore the coast. Instead, individual companies are being sued over their share of the damage.

Crude oil in the marsh from the Hilcorp oil spill. (Photo: Julie Dermansky) 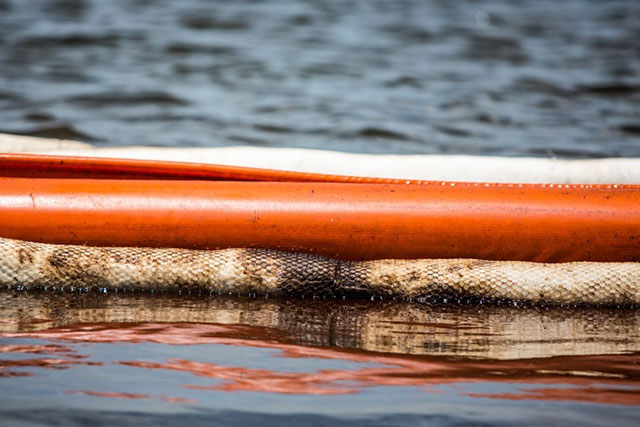 Oil spills are one of many factors hastening coastal erosion. They can kill the roots of marsh grass and mangrove trees that hold marshland and barrier islands together. Once the roots die, land loss accelerates.

According to the Louisiana Oil Spill coordinator’s office, The National Response Center gets approximately 1,500 oil spill notifications from Louisiana each year. “This represents approximately 20% of all the oil spills occurring in the United States. The average volume of oil spilled annually in Louisiana is 330,000 gallons,” the site states. 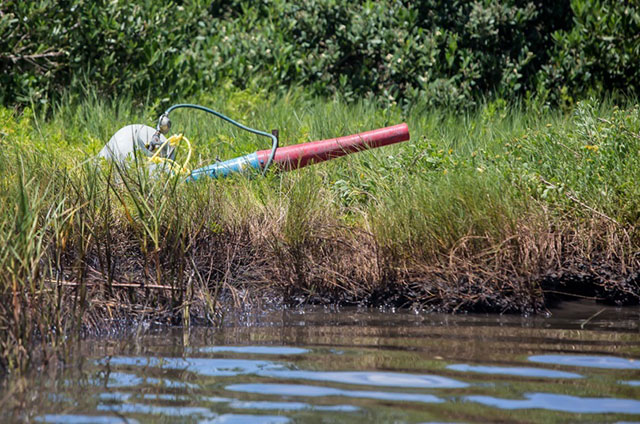 Noise machine in the marsh used to scare birds away from the oil spill. (Photo: Julie Dermansky) 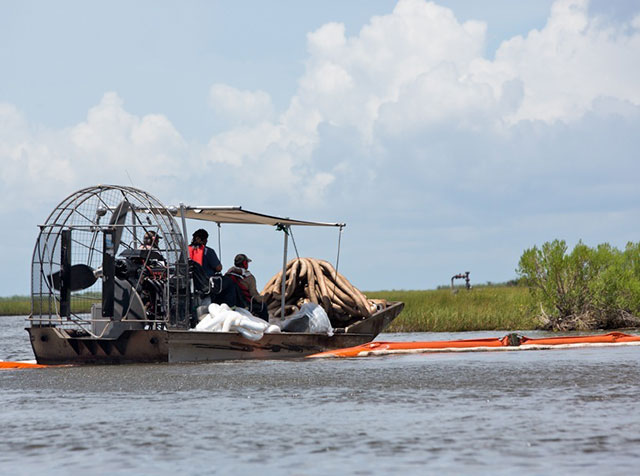 The BP oil spill, estimated by the US government at 4.09 million barrels, hastened the pace of coastal erosion. Barataria Bay was hard-hit by the BP spill. The re-oiling of even a small area in the bay sends shudders through many in the fishing industry, which has not fully recovered from the BP spill.

Other factors include rising tides attributed to climate change, the depletion of oyster reefs, and channels cut through the marshes by the oil and gas industry to access production sites, many of which were not returned to their original condition once sites were decommissioned.

Though the Coast Guard wrote that the “Guard Air Station New Orleans and Hilcorp Energy will continue to conduct over-flights to monitor oil recovery operations,” as of August 3, the Coast Guard’s external affairs office did not provide DeSmog with any additional information on the July 25 and July 28 spills. 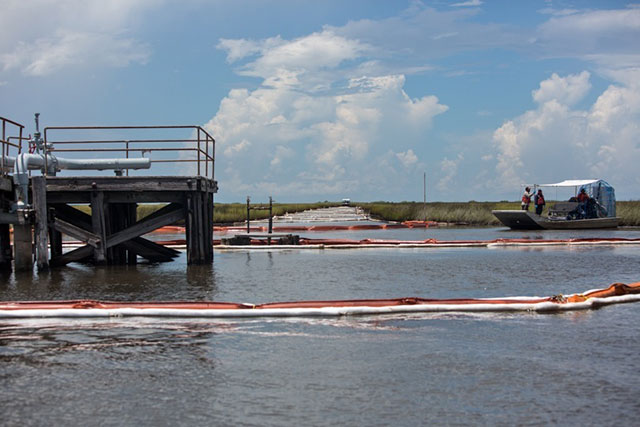 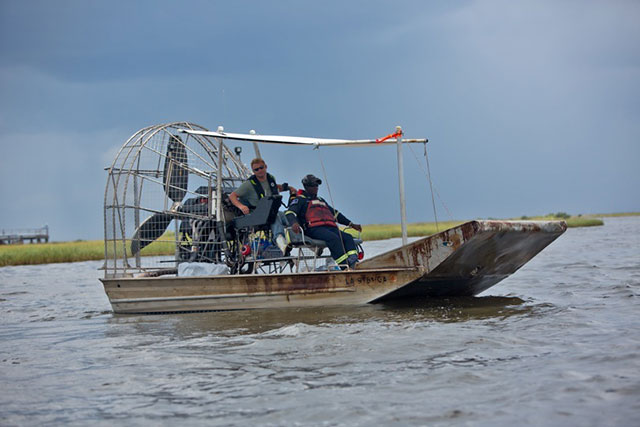 DeSmog reached out to Hilcorp to ask how much longer it estimated it will take to clean up the spill, how much spilled, and what caused it. The company did not respond.

Hilcorp’s site states: “At Hilcorp we care about doing the right thing. Our commitment to environmental and social responsibility is unwavering.”

But a lawsuit by the Louisiana Oystermen Association alleges otherwise. Oyster growers say Hilcorp deepened existing channels, using tugboat propellers that churned the bottom water in a practice known as “prop washing,” which damaged the oyster beds. “Unfortunately, Hilcorp prefers the cheapest solution, to prop-wash, and refuses the available alternatives, contributing to a ‘death by a thousand cuts’ to Louisiana’s coast,” the association’s lawsuit says.

Though the oil and gas industry doesn’t deny it has played a role in coastal erosion, earlier this year it rebuffed Louisiana’s newly-elected Gov. John Bel Edwards’ efforts to reach a settlement with the state.

Edwards’ administration is taking a hands-on approach in regard to lawsuits filed by parish governments by working in a cooperative effort with some of the law firms who filed suits on behalf of parishes.

It is a reversal of former Gov. Bobby Jindal’s approach, which undermined both the Southeast Louisiana Flood Protection Authority (known as the levee board) and the parish lawsuits against the oil and gas industry.

Lawyers for the levee board who challenged more that 80 oil and gas industry companies named in the board’s lawsuit appealed a ruling by a Federal judge who dismissed the case. Now it is up to the 5th US Circuit Court of Appeals which heard the case at the end of February to decide if the levee board’s lawsuit to revive the wetlands should be kept alive and allowed to move forward in the state court.

Despite the Plaquemines Parish Council’s vote to dismiss its own lawsuits, the cases are still moving forward, now in a collaborative effort with the State’s Governor and Attorney General. 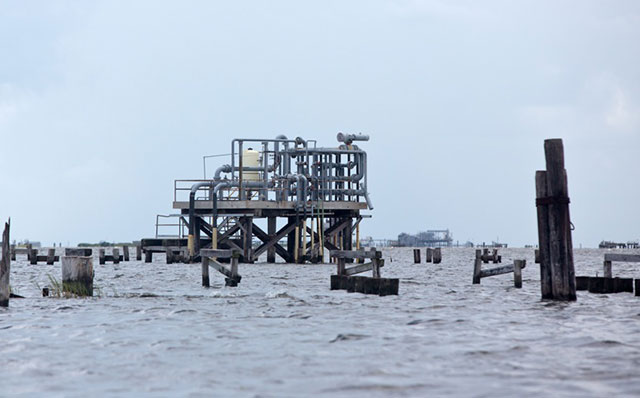 The site of Hilcorp’s spill includes Rattlesnake Bayou. Scott Eustis, a coastal wetland specialist for Gulf Restoration Network, described the condition of the area as a travesty. Industry is “allowed to leave things in such disrepair. There are bunches of old, unused tools laying about,” Eustis told DeSmog after a trip last week he took to document the spill first hand.

“Hilcorp is hardly alone in their malignant behavior toward our land, but this is one of the worst spills in coastal marsh since BP,” Eustis said. “It’s directly injected into the marshes that shelter us. These are the nurseries for our crabs, redfish, trout, and oysters, and home to rails and sparrows, pelicans and terns.”

Though small compared to the BP spill, the consequences will be real, according to Jonathan Henderson, founder of Vanishing Earth, a watchdog agency that monitors spills in Louisiana. Eustis and Henderson released aerial photographs of the Hilcorp spill on July 27.

With so many spills not making the news, Henderson hopes with the visual evidence he and others produce, more attention will be paid to the issues facing Louisiana’s coast.