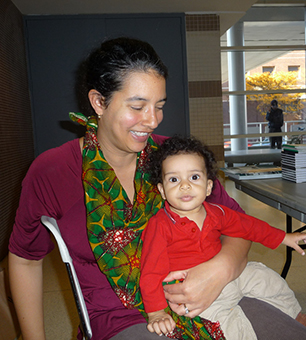 Eisa Ulen and son Ralph. (Photo: Ron Kavanaugh / Flickr)Who are we? Where do we come from? How do we construct our identity? A conversation about how we determine “who” we are.

Growing up in the San Francisco Bay Area suburbs, I was often asked “What are you?” or “Where are you from?” There weren’t many Asian-Indians (or East Indians as we were often called) living in California during the late ’60s and the ’70s, so for many people I didn’t fit neatly into the racial categories people had been conditioned to view one another. I wasn’t a Black, nor was I Latino. It wasn’t until the ’90s when I learned that I was Asian – but with the hyphen separating me into an ethnic group with the all-encompassing title “Indian.” But even that revelation was complicated by the fact that my family for three generations was from the South American country of Guyana. They had no familial ties to India (thanks to colonialism and their initial status as indentured servants in the 1800s), but they retained a kind of truncated cultural connection to Indian mores. I say truncated because Guyanese culture is a mixture of African, Anglo-British, Portuguese, Native American, and Indian influences. Talk about a crazy quilt! One could even call it “mad.”

Truthout writer and novelist Eisa Ulen knows a thing or two about the “Mad DNA” that flows not only through our blood, but also through our culture. She wrote a very personal and powerful piece that reminded me of my own cultural and ethnic background. While Eisa’s identity is rooted in the African-American communities of the mid-Atlantic, and being a scion of the Civil Rights and Black Power movements, she was nevertheless asked the same question I was growing up. As a light-skinned black girl, some people looked quizzically at her when she told them who she was. She knew that there were branches of her family tree that had Irish and Scottish origins, but it wasn’t until she took a DNA test to see if the family lore that part of her family tree was Native American (specifically, Cherokee) that the “March Madness” of her DNA came to light.

Our conversation takes us into her personal journey. It also brings to the fore the social construction of race, the way in which white supremacy muted the genetic and cultural connections many African-Americans have with Native peoples, and how the jazz-like structure of our genetic and cultural backgrounds will become more common among other cultures and countries.