Today is the 45th anniversary of the exorcism and levitation of the Pentagon. It’s an anniversary worth mentioning for the sheer joy and uniqueness of the event itself, and also for its historic and seminal merging of a creative “happening” with political intent, the engagement of ritual towards political ends and the blatant usurpation of corporate media techniques in service of a movement. The action’s absurdism extended even to the process of securing a permit beforehand; the authorities finally agreed to allow the Pentagon to be elevated three feet in the air, down from the 300 feet that organizers had initially requested — but three feet is not nothing when you’re talking about the largest office building in the world!

It was 1967, and sentiment against the Vietnam War was in the air nationwide. The counterculture was flourishing on the heels of the Summer of Love. Organizers from Mobe — the National Mobilization Committee to End the War in Vietnam — initially called for a massive march on Washington. When activists Jerry Rubin and Abbie Hoffman got involved, a plan was hatched to exorcise and levitate the Pentagon (which would, of course, have the secondary effect of ending the war). When the day came, about 100,000 protesters gathered at the Lincoln Memorial as part of what seemed like a typical Washington, D.C., rally. After the speeches from David Dellinger and Benjamin Spock, and after the Peter, Paul and Mary performance wrapped up, about half the crowd marched over the Memorial Bridge to the Pentagon.

This is when things got interesting. Several hundred people — led by Abbie Hoffman, Allen Ginsberg, the Fugs and others — started chanting and singing, since, as Time magazine dutifully explained:

[B]y chanting ancient Aramaic exorcism rites while standing in a circle around the building, they could get it to rise into the air, turn orange and vibrate until all evil emissions had fled. The war would end forthwith. 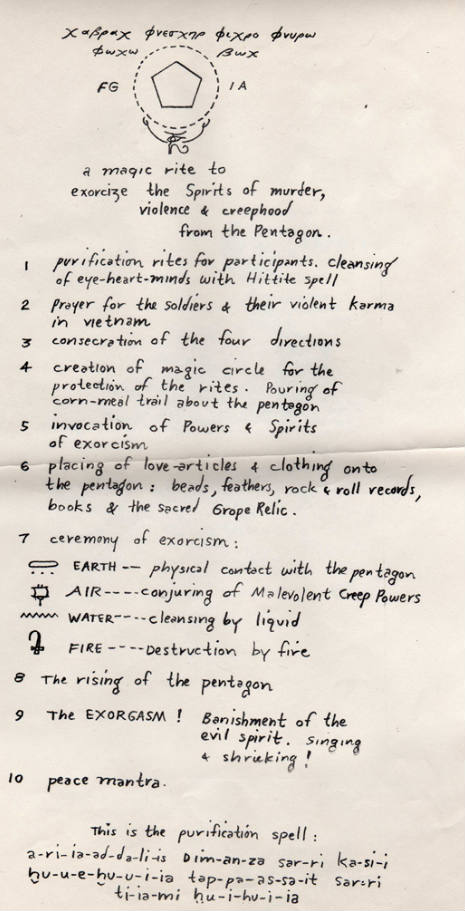 Handbill written by Ed Sanders with instructions for Pentagon exorcism. (Click to enlarge.)

Beforehand, research had been conducted on the proper components of an exorcism ceremony, including purification, calling upon the elements, surrounding the Pentagon with cornmeal, singing and shreiking. Fugs band member Ed Sanders crafted the following exorgasm text:

Meanwhile, on another side of the building, several thousand federal troops — soldiers from the 82nd Airborne Division — and a couple hundred U.S. marshals tried to protect the Pentagon steps using tear gas, rifle butts and arrests to stay on top of the chaos. Norman Mailer’s Pulitzer Prize-winning “nonfiction novel” The Armies of the Night recounts the scene there, including the author’s arrest and subsequent overnight imprisonment while hoping to make it back to New York in time for a cocktail party.

No one claims that the Pentagon actually moved. Maybe there was a mistake in the incantation. But this fabulous spectacle, an absurdist response to the absurdist reality of war in Vietnam, served as a predecessor to many creative actions over the past 45 years. The Yippies (as they were later named) who dreamed up and executed this ritual set the path for the Women’s Art Movement (WAM) of the 1970s and the AIDS Coalition to Unleash Power (ACT UP) of the 1980s and ’90s. The levitation was a precursor for effective, in-your-face public spectacles like WAM’s 1972 projections of women’s artworks onto the walls of the museums they were denied entry into and ACT UP’s “Kissing Kills” ad campaign.

The Yippies themselves didn’t simply materialize out of a cloud of pot smoke or a particularly good LSD trip, though some might have you believe that. They stood on the shoulders of the 1950s Beats, who in turn walked in the footsteps of the 1940s Dadaists, as well as the Diggers’ “Free Frame of Reference” theater work. The Diggers were experts in “creating the condition you describe” to manipulate the media’s reporting — a lesson Abbie Hoffman took to heart.

What is perhaps the Yippies’ most well known event — the throwing of real dollar bills into the the Stock Market and inciting mad money-grabbing antics — is also a powerful example of pointing out the insanity inherent in given practices on their home turf. Michael Simmons recalled in 2004:

[O]n August 24, 1967 … a group of hippies entered the Visitors’ Gallery at the New York Stock Exchange and showered the stockbrokers below with hundreds of dollar bills. The Greedheads went Grabby Ga-Ga for the Green and trading screeched to a stop. The media lapped up the story and America got its first taste of The Politics of Ecstasy. Among the psychedelic cash clowns were Abbie, Jerry, Fouratt, Albert and Lampe. Albert was “joyous.” He’d found “a new way to demonstrate, a theatrical turn of politics that invaded sacrosanct places and turned them into a stage set full of props for our use.” These long-haired, cannabinoided shit stirrers saw no contradick twixt Consciousness and Conscience. Same lobe, bay-bee.

Abbie Hoffman was an astute observer of the media, which helped him create events that the media would love. There had to be conflict, chaos and challenges to the status quo, and there had to be music, costumes and other trappings of the counterculture to stand in contrast with everything else. The exorcism and levitation of the Pentagon was a direct reaction to the manipulation of the news about the Vietnam War, which seemed like so much smoke and mirrors to those opposed to the war. Fighting such absurdity with anything short of the same seemed counterproductive and insignificant, because the mass media was so good at its war-mongering job.

The levitation of the Pentagon and the stock market money toss were part of Yippie events that pioneered the art of guerrilla or earned media. Another compelling action was the Soot-In — anything followed by “-in” was all the rage at this point — in New York City, also in 1967. Consolidated Edison’s building became overtaken with soot bombs, smudge pots and black crepe paper, along with a banner that read, “Breathing Is Bad for Your Health,” calling out the coal-burning energy company. It was a harbinger of environmental protests to come.

Hoffman wrote in “Museum of the Streets,” a chapter of his autobiography:

No need to build a stage, it was all around us. Props would be simple and obvious. We would hurl ourselves across the canvas of society like streaks of splattered paint. Highly visual images would become news, and rumor-mongers would rush to spread the excited word. … For us, protest as theater came natural. We were already in costume. … Once we acknowledged the universe as theater and accepted the war of symbols, the rest was easy. All it took was a little elbow grease, a little hustle.

Whether the issue was greed, idolatry of money, toxic soot, or the cult of the military industrial complex, these actions made the invisible visible. Yippie!

Nadine Bloch is an innovative artist, nonviolent practitioner, political organizer, direct-action trainer, and puppetista, who combines the principles and strategies of nonviolent civil disobedience with creative use of the arts in cultural resistance and public protest. She has worked with diverse organizations, including Nonviolence International, Greenpeace, The Ruckus Society, The Labor Heritage Foundation, Health GAP, Housing Works and the Bread & Puppet Theater. Her work has been featured in the Washington Post, Ms. Magazine and on CNN/Time.