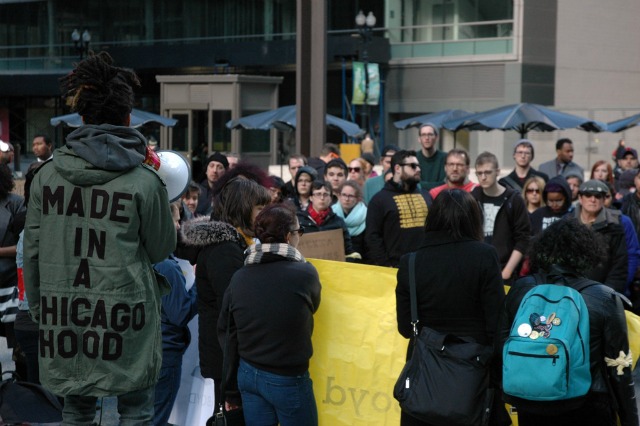 The surprise ruling in the trial of Dante Servin, a Chicago Police officer who shot and killed 22-year old Rekia Boyd on Chicago’s West side in 2012, sparked a series of protests this week in Chicago and other cities. On Monday, Judge Dennis Porter threw out the charges against Servin, who fired several shots from an unregistered weapon from his car window into a crowd, which struck and killed Boyd and wounded another man, saying that since Servin’s conduct was “beyond reckless,” prosecutors couldn’t prove recklessness. “It is intentional and the crime, if any there be, is first-degree murder,” said Porter in his ruling.

“The community and the family in particular was hit hard by yesterday’s ruling by the judge,” Todd St. Hill, an organizer with the group Black Youth Project 100, told reporters during a Tuesday afternoon rally at Daley Plaza. “Dante Servin was off duty, his gun was unregistered, he shot over his shoulder into a crowd and the reasons that he put forward were similar to so many that we’ve heard it’s formulaic.”

Tuesday’s rally downtown came after several dozen demonstrators marched on the West side for about 2 ½ hours Monday night. Meanwhile, Martinez Sutton, Boyd’s brother, traveled to Washington DC to speak at a rally to stop police violence. “This is a court of law, so if you’re feeling emotional, you might as well hit the door,” said Sutton, speaking Judge Porter’s words just prior to the ruling being handed down. “That was I figured we lost this case.”

“We got pushed out of the courtroom, and we were standing outside the courtroom, and they knew what verdict was happening,” said Ethos, an organizer with the group We Charge Genocide. “Why else would they have police dogs and two dozen officers waiting for us? We see the response they give in our communities when things like this happen.”

Demonstrators called out the flaws in the justice system, as well as the frequency in deaths of young people of color at the hands of police. “Dante Servin took any chance Rekia had to build her life,” said Charlene Carruthers, national coordinator of BYP100. “All too often those stories exist. Too many stories of a young black person shot and killed right before they went to college.” Malcolm London, another organizer with the group, told the crowd gathered in the plaza:

“Everyday there’s a new name cremated into hashtag on Twitter, Facebook, Instagram. That hurts. To see a judge, a city say here, have some money, forget about what happened. We agree that this was wrong. The way our laws are set up, they’re designed for people to get away with murder. It hurts.”

On Monday, Cook County State’s Attorney Anita Alvarez released a statement saying she was “extremely disappointed” by Porter’s ruling, saying “the State’s Attorney’s Office brought charges in this case in good faith, and only after a very careful legal analysis of the evidence, as well as the specific circumstances of this crime.” Many argue that her office botched the case by not bringing up more severe charges. William Calloway, a community activist, called for her removal at the rally. “We have to band together and make a conscious decision to whom we have to pick to not only represent the police officers, but for African Americans and minorities across this city,” said Calloway. Yesterday, the Sun-Times reported criminal defense attorney Sam Adam Jr. accused Alvarez of deliberately filing the wrong charges:

In an interview with Fox News, Sutton also questioned the State’s Attorney’s office. “We begged for murder charges. They actually had second degree murder at first and then the day before they announced the charges, they switched everything up without telling us.” Representatives from Operation Rainbow-Push agreed. “There was an officer that was guilty of murder that was found innocent,” Jonathan Jackson, National Spokesman for Rainbow-Push, told CBS. The Reverend Jeanette Wilson also said the police and prosecutors have too close a relationship. “Obviously we cannot trust local law enforcement and local state’s attorneys to be objective in cases where African Americans and people of color are involved as victims,” said Jackson.

St. Hill said the problem doesn’t only lie with Alvarez or the judge, but with the system itself. “I think you’re left with no choice but to be mad at the police, the system of policing, our so called justice system as it relates to the black community, communities of color and poor and working class people. You have no choice but to be mad and demand a sustainable and lasting transformation.”