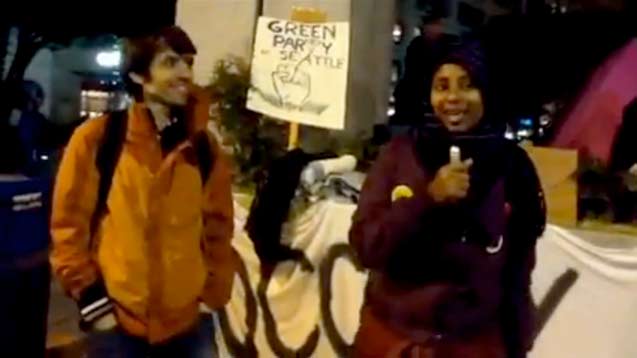 Noah Skocilich and Giday DeDe Adhanom at Occupy Seattle, October 15, 2011. (Screengrab: Noah Skocilich)Last year, Giday Adnahom was fighting deportation. As reported earlier in Truthout, Adnahom, or Dede to those who know her, came to the United States as a child with her adult sister in 1993. Under the 1980 Refugee Act, the family was granted permanent residency. Three years later, Dede was removed form her sister’s home because of abuse and placed in foster care. The agency severed all ties between Dede and her sister.

When she turned 18, Dede aged out of foster care. Unable to afford her own place, Dede was caught selling $20 of crack cocaine the following year. She took her case to trial and, in 2005, was found guilty of controlled substance delivery. She was sentenced to nine months in a work-release center, served six months, then began rebuilding her life.

In 2006, shortly after Dede gave birth to her first daughter, the U.S. Board of Immigration and Appeals began deportation proceedings against her. Although an immigration judge ruled in her favor the following year, the board appealed, and deportation proceedings reopened in 2012. Recently, after a grass-roots mobilization effort by her friends and supporters, an immigration judge ruled in Dede’s favor, granting her permanent residency.

Dede’s case is typical – many of those threatened with deportation possess criminal convictions – and atypical – she ultimately was given residency. Among the 368,644 people deported in 2013, 59 percent (or 216,810) had a past criminal conviction. Of those with convictions, nearly 31,000 had been found guilty of Level 3 offenses – misdemeanors punishable by less than one year in prison. More than half of these Level 3 offenses consisted of having previously been removed from the country (i.e. an immigration violation or for staying in the country without authorization).

According to the New Sanctuary Coalition of New York City, an interfaith network working with families to resist detention and deportation, these numbers do not include those who signed away their right to an immigration hearing, those who were expeditiously removed or those who agreed to a voluntary departure.

Who You Callin’ Illegal

What set Dede’s case apart from her counterparts who have been deported? One factor that could have played a part was activism: Dede founded Who You Callin’ Illegal, a support group that used her story as a catalyst to widen discussions around immigration to include its intersections with incarceration and mass deportation.

Who You Callin’ Illegal stemmed from her friends’ desire to support her. “People were helping out continually,” Dede recalled. “When I had to go to court, they would watch my kids. They also helped with rides. They did petitions; they made T-shirts with my face on it. … ” Other friends were less sure how they could help. Dede recalled numerous times when she was told, “We’d support you, but we don’t know how. We don’t know where to begin.” Seizing on the opportunity to use her personal experience to galvanize broader understanding and action, Dede started Who You Callin’ Illegal.

“We had met each other through Decolonize/Occupy work in 2011,” Jamie Wong, one of the group’s first members, told Truthout. Wong had previously worked against deportations in Providence with PrYSM (Providence Youth Student Movement), which, in 2006, was led by Cambodian youths mobilizing against deportations. Although she had not been involved in anti-deportation work since moving to Seattle, Wong, who had emigrated from Malaysia ten years earlier, wanted to support Dede in her fight.

“We fliered the port,” she recalled. “We wanted to reach out to the Seattle Port Truckers Union, which has a lot of East African, Asian and Russian immigrants.” The group also reached out to the janitors at the University of Washington, many of whom are East African and Southeast Asian immigrants. Many times, outreach included shifting the dominant narrative of the good or deserving immigrant versus the bad immigrant. “People would ask, ‘What wrong did this person do to get deportation?’ ” Wong recalled. “We talked about the challenges that Dede went through and connected them to the challenges that their own children are going through.”

In addition, members did presentations in middle and high schools. “We did one classroom presentation in a Tacoma middle school,” Wong recalled. “The whole class was youth of color. They connected their own family experiences with Dede’s story. The kids shared things like, ‘My mom’s an immigrant and she gets treated badly at her job’ and ‘My uncle is in deportation hearings.’ The reality is that so many people have stories like Dede’s, but we don’t hear them.”

Wong states that, during the past year, Who You Callin’ Illegal has met more undocumented people fighting deportation. The group has started to work with La Colectiva, a collective of undocumented people who help fight deportation cases. In October 2013, La Colectiva helped organize a rally to stop the detention and deportation of Jose Robles, who has been facing deportation since 2010 after an argument with a neighbor drew attention to his undocumented status. Robles, a father of three, applied for a Cancellation of Removal, which immigrants become eligible for after ten years in the United States. Although Robles had been in the country for 13 years, an immigration judge denied his application.

His daughters, ages 19, 14 and 4, reached out to immigrant rights groups, including La Colectiva, to help stop their father’s deportation. They petitioned. They asked people to make phone calls, and they picketed ICE’s office in Tukwila, Washington. The public pressure paid off. ICE granted Robles a one-year stay of removal, allowing him a year to reopen his case and apply for a Cancellation of Removal.

Robles’s daughters drew on the narrative of not tearing families apart to draw public attention and sympathy to his case. While fully supporting the right of Robles – and countless other parents and caregivers – to stay, Who You Callin’ Illegal pushes to go beyond that narrative. “The rhetoric of ‘keep families together’ is important, but we need to ask more than that. Why do families continue to come here? What are the broader structures that contribute to criminalized migration?” Wong asked.

How to Move Forward

In the wake of the exciting news of Dede’s victory, Who You Callin’ Illegal is seeking to broaden its work. “One of the challenges of our group is that we don’t have community connections,” Wong reflected. “We’re not deep in our own ethnic communities. I didn’t grow up in Seattle, so I don’t have family connections here. We had to figure out how to build those.”

This lack of connections with immigrant communities is not limited to Who You Callin’ Illegal. Wong pointed out that, although Seattle’s annual May Day march goes through Chinatown, none of the participants have had Chinese-language literature for curious bystanders. “This past year, ours was the only flier in Chinese,” she recalled. “We had little old grandmas running up to us asking, ‘Why are all these people here?’ This march comes through Chinatown every year, and no one ever has anything in Chinese about why they’re there.”

“We have language barriers, but we also need to get the message out that we need more than lawyers. We need community,” Dede said. “There are times when you get tired and you want to give up. I fought as much as I could fight. But even when I was tired, annoyed, irritated, I found hope with my kids, my friends and the people around me.”

Although Dede has won her fight against deportation, she received disappointing news shortly before Christmas. Because of her felony conviction, her application for citizenship was denied. She received her permanent residency card, which allows her to remain in the country for ten years, but must wait another five years before resubmitting her citizenship application.

In the meantime, Dede is raising her three young children and working in construction. Her advice to those fighting – or working with others to fight deportation? “Do everything you can until you can’t. Try every tactic possible. Keep fighting. Don’t give up.”

Share
Copyright, Truthout. May not be reprinted without permission.
Victoria Law