Most young farm-workers in California are migrants from Mexico, especially the south of the country, where many people share an indigenous culture and language. Ricardo Lopez, living in a van with his grandfather in a store parking lot in Mecca, a tiny farmworker town in the Coachella Valley, says working as a migrant without a formal home was no surprise:

This is how I envisioned it would be working here with my grandpa and sleeping in the van. It’s hot at night, and hard to sleep well. There are a lot of mosquitoes, very few services, and the bathrooms are very dirty. At night there are a lot of people here coming and going. You never know what can happen; it’s a bit dangerous. But my grandfather has a lot of experience and knows how to handle himself. With the money I earn I’m going to help my mother and save the rest. I’ll be attending college in the fall at Arizona Western College—my first year. I want to have a good job, a career. I’m not thinking of working in the fields. Not at all. I look at how hard my grandfather has worked. I don’t want to do field work for the rest of my life because it’s so hard and the pay is so low.

Lopez describes the reality for farmworkers in California in a way that gives tangible meaning to the facts and numbers describing farmworker life. There are about 120,000 indigenous Mexican farmworkers in California. Counting the 45,000 children living with them, that is a total of 165,000 people. They are the most recent migrants from Mexico. They speak twenty-three languages, come from thirteen different Mexican states, and have rich cultures of language, music, dance, and food that bind their communities together. 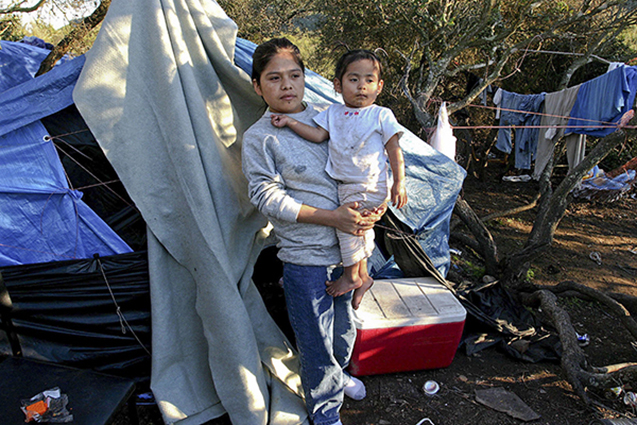 Lorena Hernandez, working in a blueberry field outside of Fresno, in California’s San Joaquin Valley, came from Oaxaca with her aunt after getting pregnant as a teenager. Now she wonders if life will have more to offer to a young indigenous woman than field labor:

They pay six dollars a bucket picking blueberries, and each has to weigh twelve pounds. This is my second year doing this work. Since I don’t have much experience, I can only pick fifteen or sixteen buckets a day. Those with more experience can do twenty. After a day picking blueberries, my hands feel tired and hurt a lot. But they don’t give us gloves because they say they will damage the fruit.

I don’t really have friends, just acquaintances from work. Most who are my age don’t have a child, like I do, so they go out on the weekend. Since I have a daughter, I don’t go out. So my coworkers share their stories with me because I just stay at home. I really don’t have a vision of my own future yet. I went to school in a small town in Oaxaca, Mexico, and I left when I was fifteen years old. I don’t think I’ll ever return to school because of my age. My job will be working in the fields. I would love to go back to school, but it’s too late for me. Maybe one day. 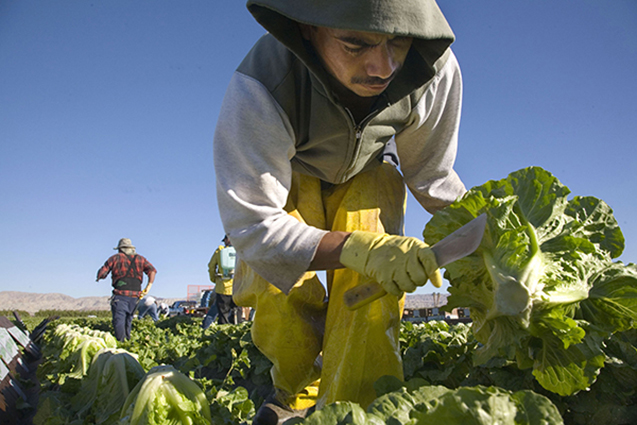 The indigenous immigrant community is very young. The typical age of someone crossing the border today is about twenty years old, and the average age of all California farmworkers is twenty-one. Many young people, even children, work in the fields. On average, Mexican farmworkers in California have only six years of school, but younger Mexicans tend to have more education than older migrants.

Javier Mondar, son of a single Mixtec mother, lives in Santa Maria. Growing up, he traveled with his family as they migrated with the crops. He finished high school in spite of the obstacles, and went on to university to get skills to fight discrimination against indigenous people. Yet he was also the victim of discrimination himself and recognizes that, within his own community, his sexuality was not easily accepted:

I grew up in a farm-working family—so working in the fields is everything I ever knew. Whenever I got out of school, it was straight to the fields to get a little bit of money and help the family out. My sisters worked too, and at night I could hear Teresa, the youngest, crying because she had so much pain in her hands from the work.

I always moved. In my high school years, I moved six times. In junior high I moved three times and I went to six different elementary schools. After high school I left home, because my family is very traditional, and I’m bisexual. To them that’s a sin, and you’re going to hell. I tried to live with my dad, but he blamed me too, so finally I didn’t have anywhere to live. I was homeless for three months.

Farm labor is very dangerous, with one of the highest rates of occupational injury. At least sixteen farmworkers have died of heat exposure in California fields since 2005. The median family income is $13,000 for an indigenous family. Migrants who have just arrived earn about $7.50 an hour, but even workers with many years in the fields still often earn less than $9.00. One-third of the workers earn above the minimum wage ($8.00 per hour), one-third earn just the minimum, and one-third earn a wage below the minimum. One family in ten lives in a shack or makeshift housing, but even in wealthy agricultural areas many migrants live outside in tents, under trees, or even sleep in the fields. 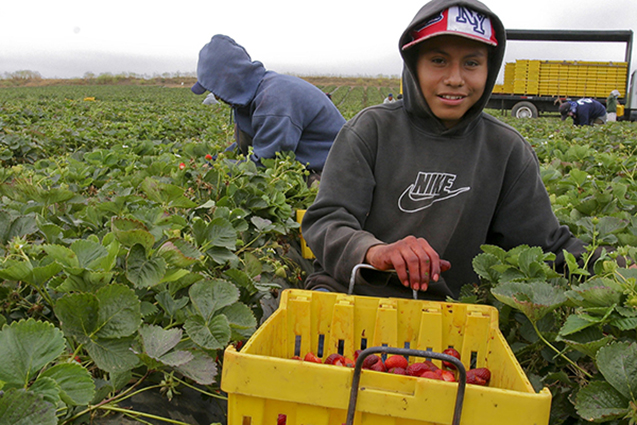 Yet people have strong community ties because of shared indigenous culture and language. Migrant indigenous farm-workers participate in immigrant rights marches, and organize unions. Some organizations, like the Frente Indígena de Organizaciones Binacionales (FIOB), have members and activity on both sides of the border. Traditional culture is also being reinterpreted by a new generation. 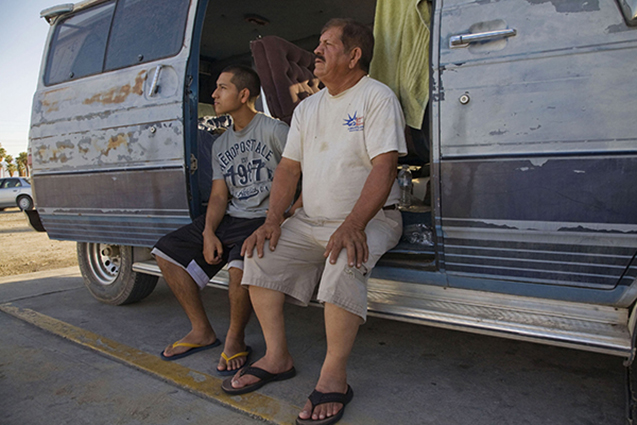 Raymundo Guzman, who lives with his mom in a trailer on the edge of Fresno, dreams about becoming the first Mixteco rap artist. His cultural references and heroes include Tupac Shakur, but also his own mother, who speaks only Mixteco and never learned to read or write herself, but put him through school with her labor in the fields:

I was very young when my mother first took me to work in the fields—about eight or ten years old. I left school at nineteen years old. I started working full time. I’m still working in the fields—today I’ve been picking peaches. But I don’t see myself working in the fields forever—I don’t wish that job on anyone. When I first arrived from Mexico, I only spoke Mixteco (an indigenous language). I still speak it with my mother, but I speak Spanish with my brothers and English with my sister—three languages. I’m going to be a rap star— with a conscience. My idol is Tupac Shakur, because he spoke about all us kids in poverty. He said we’re like a flower that grew in concrete. You can see the rose and stem is twisted, but it grew out of the hard concrete. We’re from the hood but we’re going to come up. Some people may not want us to achieve much, but we’re human too. 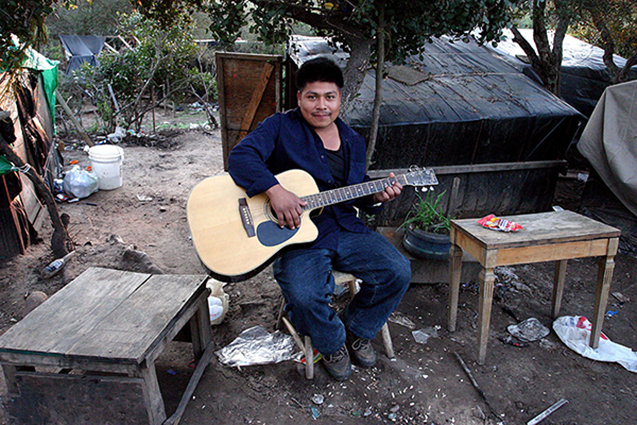 These images and personal accounts are taken from the photo-documentary project Living Under the Trees. It contains personal oral histories and photographs of farm-workers and their families who are migrants from indigenous communities in Oaxaca, Mexico. People think of farm labor as physically demanding, and it is, but it is also skilled work and, more importantly, socially necessary. Nevertheless, the way immigration and labor, especially farm labor, are presented in the media and government is extremely divorced from reality. 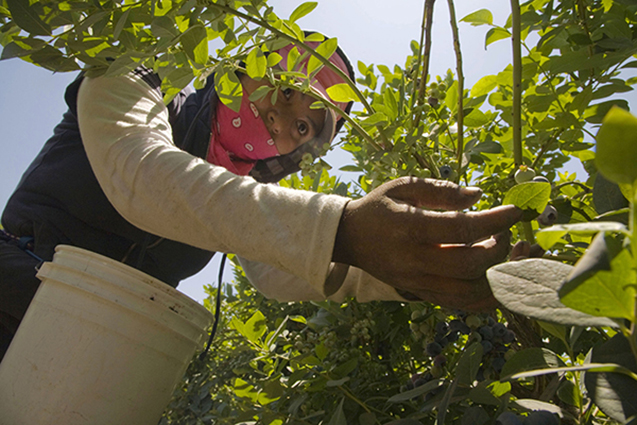 This project is therefore a reality check. The idea is to give indigenous migrant communities a vehicle they can use to find support for dealing with the social problems they face, such as housing, low wages, and discrimination. This documentary work is not neutral. Its purpose is to help provide a means for people to organize and win support in a world that, at best, treats them as invisible, and at worst demonizes them. I used to be a union organizer, and this work is very similar. Social documentation not only has to have an engagement with reality, but should try to change it.