“Capital punishment, one might say, is written about only in whispers.” – Albert Camus (Photo: Electric Chair via Shutterstock)

This piece was originally published on the Prison Culture blog last year, in the wake of the Justice Department’s announcement that it would pursue the death penalty for Dzhokhar Tsarnaev. Now, as a federal jury prepares to decide whether Tsarnaev should be killed, the piece is once again crucial reading.

It was raining, I think, when the call came. She just said: “He’s dead.” That’s all I remember. Over the next few days, words cascaded over me: drunk driver, head on, no pain, quickly, dead, dead, dead. Still more days passed, then months, there was a trial. I didn’t go to court. I don’t remember what was said. I was 15. He was only 16. I had a crush on him. I think he knew. Today I can only remember his face by looking at an old photograph. I only have one.

I hope he dies too. I think I said these words or at least I thought them. I hope they kill him. Then Claire’s words, “he must feel terrible for killing my son. He must be in so much pain.” I wanted to smack her for her disloyalty. What a bad mother who couldn’t even grieve her own son properly. How dare she betray him that way? I wanted blood. She told his wife and son that she wished neither him or them any harm. She asked how they were holding up. The wife of the killer just cried. I heard the story second hand. I was seething. WHAT IS THIS? I thought. I didn’t understand… For many years, I just wanted blood…

Every night (early morning), before I go to bed, I visit the Death Penalty Information Center’s website to check whether someone has been murdered by the State. On days when a person has been killed, I say a prayer of forgiveness for the blood that I have on my hands. These deaths, however, barely register in the public square. Out of sight and out of mind. So far in 2014, seven people have been executed in our names. I’ve offered seven prayers and it’s just over a month into the new year.

“Capital punishment, one might say, is written about only in whispers.” – Albert Camus

I’m told that support for the death penalty is dropping. Yet 60% of Americans still support state sanctioned murder. In this country, we invent the “other” so that we may kill them, dead. Not in public anymore but hidden behind prison walls. For a country that both loves & fears death so much, we are eerily and strangely silent about state-sanctioned murders be they by lethal injections or drones.

Last April, though it feels much more distant now, Dzhokhar Tsarnaev and his brother, Tamerlan, were accused of planting two bombs at the Boston Marathon. Three people were killed (including an 8 year old child) and hundreds more were maimed & injured. It was a tragedy that should not have happened. Tamerlan Tsarnaev, the alleged mastermind of the crime, is dead and Dzhokhar, the younger brother, is incarcerated awaiting trial. He will be convicted. Of this, there is no doubt.

In the immediate aftermath of the bombing, a number of ordinary people sprung into action to help the victims of this heinous crime. They showcased what’s best about us as human beings, exhibiting selflessness, kindness, and compassion.

On the other side of the ledger, when asked by reporters about the suspect’s condition, the now-former Mayor of Boston responded: “Who cares?” Social media was rife with high fives and praise for the Mayor’s quip. Menino followed up by stating that he wanted the harshest possible punishment (including potentially the death penalty) for the surviving accused bomber, Dzhokhar Tsarnaev. There would be more blood shed, a life for a life.

Few could be surprised that many were clamoring for Tsarnaev’s execution. For example, Boston’s then police commissioner, Edward Davis, said that it was fine by him if Tsarnaev was killed. ‘Justice’ must be served.

I did not join the chorus calling for the accused killer’s state-sponsored murder. The 15 year old me would have. But as a grown-woman, I’ve come to understand that vengeance is not justice. The measure of a society’s level of civilization, in my opinion, is how it treats those who have most egregiously transgressed its social norms.

“It is the job of thinking people not to be on the side of the executioners.“
― Albert Camus

On January 30, Attorney General Holder announced that the government would pursue the execution of 20 year old Tsarnaev. Federal prosecutors in Massachusetts later filed a notice of intent to seek the death penalty. An eye for an eye. Who didn’t know that this was coming? I encourage everyone to read the notice at least once. In it, the government lays out the charges and the “facts” of the incident. The “facts” are horrible and the government calls them “acts of terrorism.” It suggests that in light of the heinousness of the crimes, the death penalty is the moral response. At least 60 percent of the country agrees. I do not.

I’m thinking again today about our collective desire as humans to wish certain people out of existence. Because I am steeped in the world of prisons, I see this tendency regularly. It’s as if any time someone does something horrific, we resort to ostracism at best and violent retribution at worst. Sinead O’Connor has a beautiful song called “What doesn’t belong to me.” One lyric is “Take back what doesn’t belong to me.” But here’s the thing: Dzhokhar Tsarnaev does belong to us.

Though we may desperately want to rid ourselves of those we consider to be “monsters,” the fact is that we cannot. Much as we want to deny it or distance ourselves from it, our shared humanity binds us to each other. It’s that common humanity that should make it impossible for us to co-sign the taking of a life. Dzhokhar Tsarnaev’s friends were stunned that he was capable of such destruction. To them, he appeared to be a nice & decent person. And perhaps he was. In hindsight, we don’t want to believe that this could be true. Yet it very well could be. And since we can’t reconcile the portrait that his friends paint with his subsequent violent actions, we’d rather do away with him all together. We don’t want to wrestle with the fact that, as human beings, we are capable of doing both good and terrible things at different times. It’s unsettling to sit with this recognition.

I’ve been thinking about what it would take for Tsarnaev to make amends for the terror that he wrought. Would it ever be possible for him to repair the harm that he has caused? What would we accept as a measure of accountability, contrition, and restoration? Is killing him the way to achieve ‘justice’? Will locking him up in a prison for the rest of his life make him accountable for his actions? He’s 20 years old. The rest of his life will be a very long time to be caged. I don’t have any good answers to the questions that I’ve posed. I only know that the death penalty is not a deterrent and that it is profoundly inhumane. I don’t want the state killing people in my name. I don’t.

I’ve spent the past few days meditating again on the following quote by Thich Nhat Hahn? 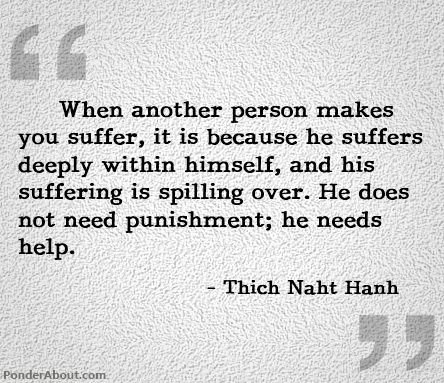 I’ve been trying to envision the types of “help” that we could realistically offer Tsarnaev. He seems to have admitted his role in the bombing. Might he be willing to talk with victims and family members who want to hear directly from him about why he did what he is alleged to have done? He should be expected to learn about the lives of each person who he killed and injured. He should be made to grapple with the devastating consequences of his actions. It’s too easy for us to call him a “monster” and to disappear him. It lets him off the hook and us too.

“People who treat other people as less than human must not be surprised when the bread they have cast on the waters comes floating back to them, poisoned.“ – James Baldwin

I spoke to Claire years after my friend’s (her son) death. Why did she extend such empathy to a killer? Why had she forgiven him so quickly? She stared for several seconds which felt like minutes and responded: “Why not?” She didn’t say anything more at the time. I was confused and still angry. Later when I was older & visiting, we had lunch and Claire told me that several months after he was sentenced to prison, the man who killed her son sent her a letter. She said that he expressed his profound grief and sorrow over what he had done. He told her a bit about his life and what had led him to drink and drive. He told her that he would do his utmost to live a life of service in the future. They continued to correspond while he was incarcerated and are still in touch all of these years later. By the time she divulged this information to me, I had made peace with my grief and had experienced other tragedies. My heart was lived in and well-worn. I understood compassion, I had been called to give forgiveness, and I had experienced the importance of grace. I was more human and could therefore accept the humanity in others. I no longer wanted blood.

I don’t want Dzhokhar Tsarnaev’s blood on my hands… Boston in Mourning After Marathon Bombings

Boston was in mourning Tuesday for three killed and at least 144 wounded in a “cowardly” bombing.