On Wednesday, the struggle waged by Indigenous Water Protectors against the construction of the Dakota Access pipeline raged on when a surprise act of civil disobedience halted construction for 6.5 hours.

Dale American Horse, known to community members as Happi, played a pivotal role in the action by using a blockade apparatus to attach himself to a piece of equipment, forcing a shutdown of all construction equipment in the area. For hours, officials attempted to remove Happi in a variety of dangerous ways that included the use of a reciprocating saw — which is not a precision tool — and an ill-conceived effort to lift Happi with a hydraulic crane.

As thousands of Natives from around the country continue to gather and rally at Standing Rock, it has become clear that a historic stand worthy of song and story is being made in North Dakota. 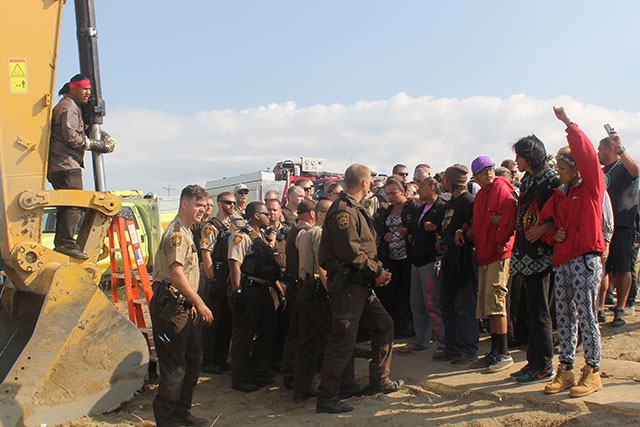 The first proposed path of the Dakota Access pipeline was scrapped, in response to complaints that it would endanger the drinking water of North Dakota’s capital. The route was subsequently revised, such that the pipeline would cross the Missouri River — a half-mile north of the Standing Rock Sioux Reservation. This exercise in erasure and Native disposability has been squarely rejected both by the Standing Rock Sioux and by Natives who have flocked from around the country to join their cause.

For those who are paying attention, the question of whether or not Indigenous peoples can repel the Dakota Access pipeline has begun to embody one of the larger questions of our time: Will non-Native people finally hear Indigenous voices, and help shift the course of history? 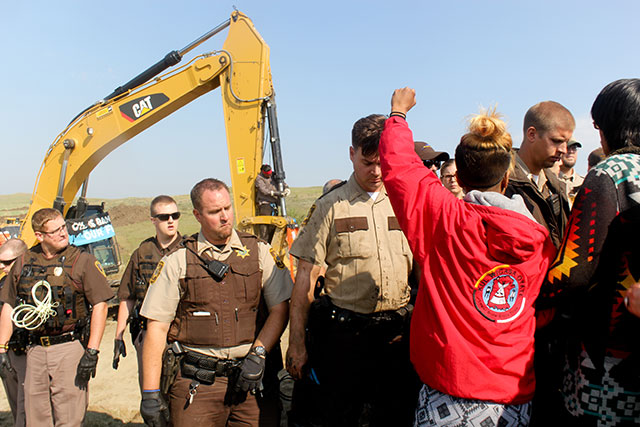 A crowd of approximately 20 from the Mni Wiconi from camps located along the river come to bear witness to the action. (Photo: Desiree Kane)

It’s no secret that all life on Earth stands imperiled, during a period that many scientists have described as the world’s sixth mass extinction event. We have been told, again and again, that our entire way of living and our entire culture of energy dependence must be transformed if we are to have any hope. And yet, greed has kept us on a global collision course with catastrophe. 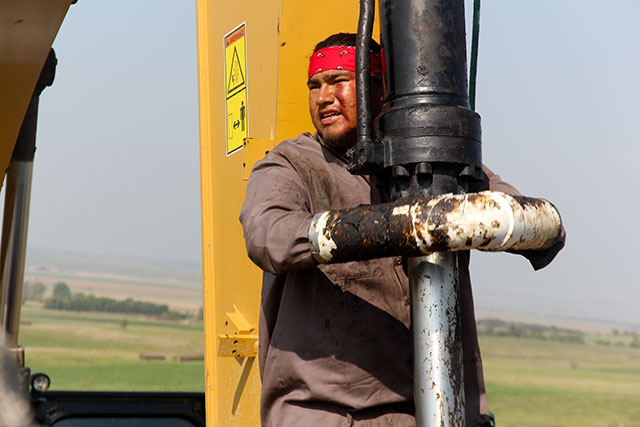 Two to three hours into the lockdown organized by Standing Rock’s Red Warrior Camp, American Horse watches as his supporters are pushed back by police 100 yards. (Photo: Desiree Kane)

At Standing Rock, the camps that have formed to stop the pipeline carry many lessons. They carry the wisdom of elders. They carry the stories of struggles past. They hold the vibrancy of their youth who have stepped into struggle for the first time. And Wednesday, they carried the power of a fierce resistance.

“In our Lakota language we use the word Mni Wiconi, which means ‘water is life.’ Protecting the water is equal to saving the world.”

Happi’s mother, Cheryl Angel, who supported her son’s choice to get arrested in the action, explained in an interview, “Sometimes you have to put yourself out there if you want people to understand what you’re doing. It seems like the state of North Dakota doesn’t understand that the people who have lived here for a millennia have a relationship with water.”

Across the Earth, Indigenous peoples are leading struggles to hold back humanity’s assault on the natural world. In North Dakota, protesters — some of whom prefer to be called “Water Protectors” — are using prayer, community building, art and action to make the world at large aware of their struggle to preserve what they cherish. 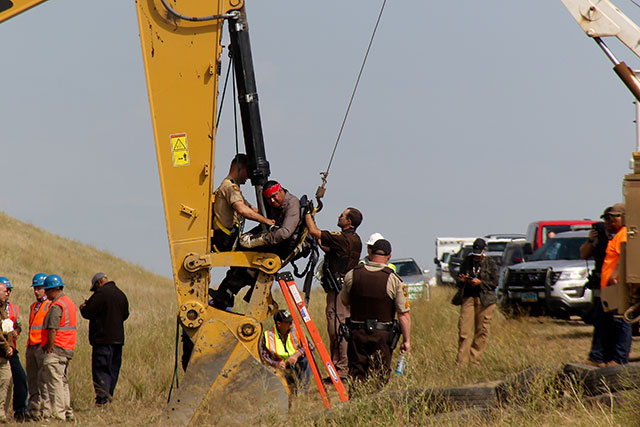 In one of the more dangerous attempts to remove American Horse, police attached a hydraulic crane to his body, putting him at serious risk of personal injury. Law enforcement also attempted to used a reciprocating saw to remove American Horse, which easily could have resulted in a severed limb, had the material of his blockade gear been breached. (Photo: Desiree Kane)

“Water is sacred to us. We use it every day not just to live, but for ceremonies, for spiritual cleansing, for healing and for blessing,” said Angel.

A total of eight Water Protectors were arrested over the course of Wednesday’s action. While awaiting her son’s release, Angel spoke of his sacrifice as being grounded in a cultural understanding of water, and our human relationship with the Earth. “In our Lakota language we use the word Mni Wiconi, which means ‘water is life.’ Protecting the water is equal to saving the world. I honor that, Happi honors that. Everyone standing with Standing Rock understands that no one can live without water.”

Share
Copyright, Truthout. May not be reprinted without permission.
Desiree Kane

Desiree Kane is a Miwok descendant and multimedia journalist focused on producing stories with a conscience at the intersection of Indigenous peoples and the environment.