Wall Street will set still another record for political spending this election cycle.

So far in 2015 and 2016, banks and financial interests have put more than $1.4 billion into efforts to elect and influence holders of national political office, according to “Wall Street Money in Washington,” a new report by Americans for Financial Reform based on data compiled by the Center for Responsive Politics.

That spending total works out to more than $2.3 million a day!

Financial sector companies, employees, and trade associations have reported making nearly $800 million in campaign contributions since the start of 2015, more than twice the spending level of any other specific business sector in the Center for Responsive Politics database.

Some of the financial industry’s biggest donors have been hedge funds, with James Simons’ Renaissance Technologies and Paul Singer’s Elliot Management leading the way at $37.5 million and $20.2 million respectively. Of the campaign contributions that can be clearly linked to one political party or the other, 61 percent have gone to Republicans and 39 percent to Democrats.

The financial industry’s expenditures — about $667 million through the second quarter of 2016 — place the sector in third place, behind a category of “Miscellaneous Business” companies and trade associations at $780 million and health-related companies at $775 million.

These figures do not count much of the so-called “dark money” contributed to nonprofits that engage in political advocacy or the money spent on lobbying-related research and support activities. Nor do they include spending by “Miscellaneous Business” entities like the US Chamber of Commerce, a national business group that lobbies extensively on financial issues. 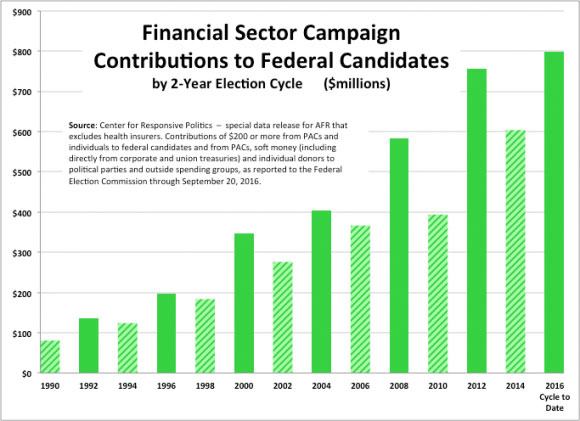 Wall Street political spending has increased sharply since 2009 and 2010, when industry forces were trying to blunt or defeat the reform legislation that came to be known as Dodd-Frank. The legislation was eventually enacted over industry objections in 2010, but that just marked the end of one chapter and the beginning of another.

Since Dodd-Frank’s passage, big banks and other financial interests have been working nonstop to block, delay, and weaken important elements of that law — as well as the agencies responsible for carrying it out. At the same time, they’ve also been working to stymy efforts in Congress to move forward on the next steps needed to make sure Wall Street serves Main Street, instead of continuing to put us all at risk.

Another new AFR report, “Where They Stand on Financial Reform: Votes Cast in the 114th Congress,” details many of the financial industry’s latest efforts to avoid needed reform. Wall Street has enjoyed some real success in this lower-visibility phase of the battle, using a “must pass” 2014 budget bill, for example, to repeal an important provision of Dodd-Frank and let big banks go back to using insured deposits and other taxpayer subsidies to gamble on the riskiest of financial derivatives.

Since 2010, Wall Street-backed deregulation proposals have continuously clogged the legislative pipeline. In the current Congress alone, lawmakers friendly to Wall Street have introduced 10 separate legislative proposals to limit the authority or political independence of the new Consumer Financial Protection Bureau.

Meanwhile, despite polls that show lopsided majorities of Republicans as well as Democrats and Independents favoring tougher Wall Street regulation, Congress has yet to vote on a single bill that would move things in that direction.

The $2.3 million a day Wall Street executives are spending on politics certainly rates as a lot of money. But measured against the many special privileges that the financial industry and its execs continue to enjoy, that expenditure amounts to a smart investment — for Wall Street.