Raising the minimum wage would give our economy much more bang for the buck than we get from the financial industry’s yearly windfalls.

Purveyors of Ferraris and high-end Swiss watches keep their fingers crossed toward the end of each calendar year, hoping that the big Wall Street banks will be generous with their annual cash bonuses.

New figures show that the bonus bonanza of 2013 didn’t disappoint. According to the New York State Comptroller’s office, Wall Street firms handed out $26.7 billion in bonuses to their 165,200 employees last year, up 15 percent over the previous year. That’s their third-largest haul on record. 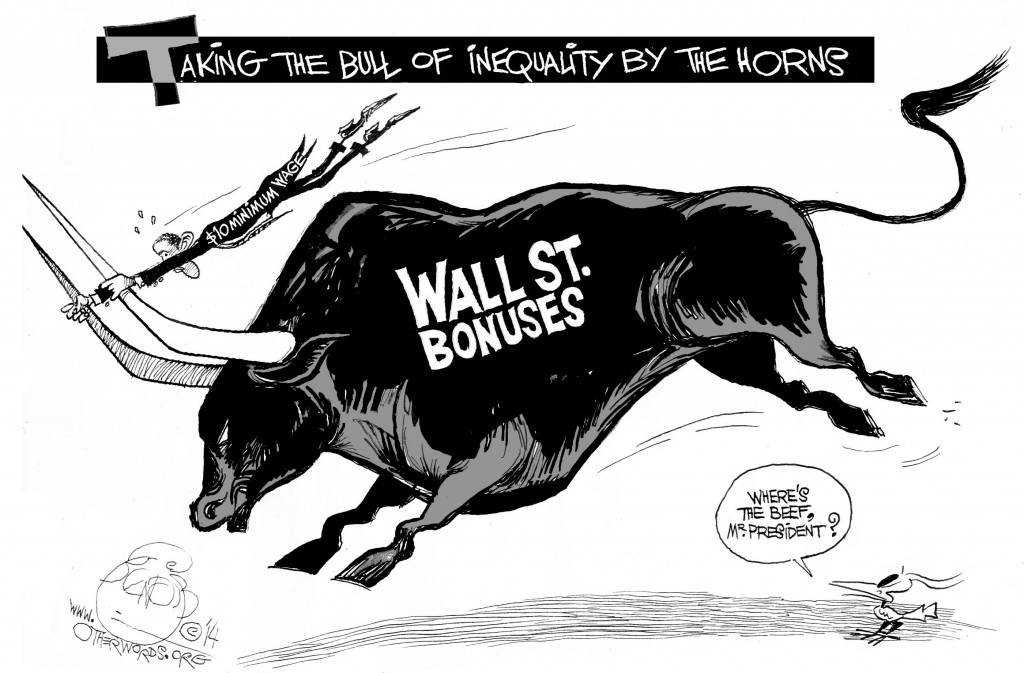 Wall Street Charges Ahead, an OtherWords cartoon by Khalil Bendib

That money will no doubt boost sales of luxury goods. Just imagine how much greater the economic benefit would be if that same amount of money had gone into the pockets of minimum-wage workers.

The $26.7 billion Wall Streeters pocketed in bonuses would cover the cost of more than doubling the paychecks for all of the 1,085,000 Americans who work full-time at the current federal minimum wage of $7.25 per hour.

And boosting their pay in that way would give our economy much more bang for the buck. That’s because low-wage workers tend to spend nearly every dollar they make to meet their basic needs. The wealthy can afford to squirrel away a much greater share of their earnings.

When low-wage workers spend their money at the grocery store or on utility bills, this cash ripples through the economy. According to my new report, every extra dollar going into the pockets of low-wage workers adds about $1.21 to the national economy. Every extra dollar a high-income American makes, by contrast, only adds about 39 cents to the gross domestic product (GDP).

And these pennies add up.

If the $26.7 billion Wall Streeters pulled in on their bonuses last year had instead gone to minimum wage workers, our economy would be expected to grow by about $32.3 billion — more than triple the $10.4 billion boost expected from the Wall Street bonuses.

This immense GDP differential only speaks to one price we pay for Wall Street’s bonus reward culture. Huge bonuses, the 2008 financial industry meltdown made clear, create an incentive for high-risk behaviors that endanger the entire economy.

And yet, nearly four years after passage of the Dodd-Frank financial reform, regulators still haven’t implemented the modest provisions in that law to prohibit financial industry pay that encourages “inappropriate risk.” Time will tell whether last year’s Wall Street bonuses were based on high-risk gambles that will eventually blow up in our faces.

Low-wage jobs, on the other hand, endanger nothing. The people who harvest, prepare, and serve our food, the folks who keep our hotels clean, and the workers who care for our elderly all provide crucial services. They deserve much higher rewards.