Back in 2009, when there was (briefly) a policy consensus in favor of active fiscal policy to fight the economic slump, there were many warnings to the effect that we must not repeat the infamous mistake of 1937, in which President Franklin D. Roosevelt was persuaded to focus on balancing the budget while the economy was still weak, terminating the recovery and sending the United States into the second leg of the Great Depression.

And what policy makers proceeded to do was, of course, to repeat the mistake of 1937.

The International Monetary Fund’s new World Economic Outlook is, in effect, an extensively documented exercise in hand-wringing over the consequences of this repeat of bad history. Kudos to the Fund for having the courage to say this, which means bucking some powerful players, as well as admitting that its own analysis was flawed.

There is, however, one point that I think is getting skewed in the discussion of the I.M.F.’s new concern over premature austerity. Much of the discussion seems to focus on the question of whether to relax demands on debtor countries — which is certainly a crucial issue for the euro zone. However, the global 1937 that we’re now experiencing isn’t just about forced austerity in Spain, Greece and other nations. It’s also — and I think mainly — about unforced austerity in countries that remain able to borrow very cheaply.

Look at estimates of cyclically adjusted budget deficits from the I.M.F.’s Fiscal Monitor, measured as a percentage of potential gross domestic product, on the chart on this page. I don’t think you want to take these numbers as gospel — in Britain’s case, at least, there’s a very good argument that the I.M.F. is greatly understating potential output and, hence, overstating the structural deficit, and I suspect that this is true to a lesser extent for the United States. 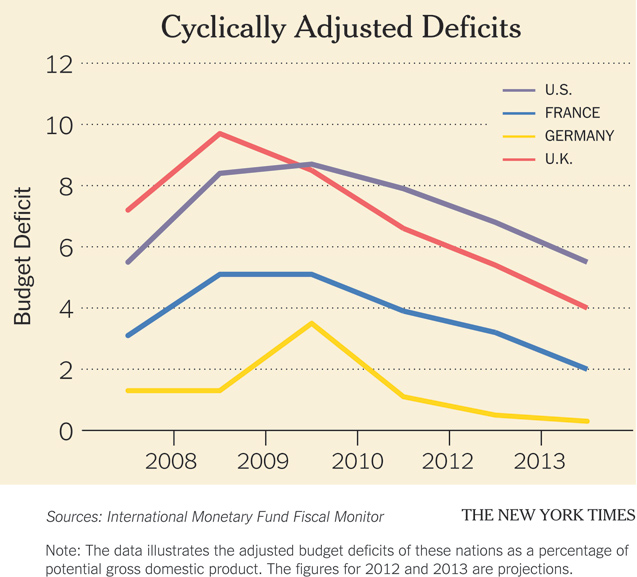 But the point is that even cheap-money countries facing no pressure either from the market or from external forces to engage in immediate austerity are nonetheless engaged in sharp fiscal contraction.

This is taking place in an environment in which the private sector is still deleveraging ferociously from the debt binge of the previous decade, so we’re creating a situation in which both the private sector and the public sector are trying to slash spending relative to income. And, whaddya know, the world economy is sputtering.

The truly amazing thing is that this calamitous error is not, for the most part, the result of special interests or an unwillingness to make hard choices. On the contrary, it’s being driven by Very Serious People who pride themselves on their willingness to make hard choices (which, naturally, involve inflicting pain on other people). In fact, I’d argue that the desire to make hard choices, or at least to be seen as doing so, is the reason these Very Serious People chose to ignore the extensive and, we now know, completely accurate warnings from some economists about what would happen if they gave in to their austerity obsession.

Izabella Kaminska at the Financial Times’s Alphaville blog recently wrote that I was feeling a bit “smuggish” about all this. Well, I’m only human. But, truly, this is a terrible thing to behold.