The Scottish National Party’s landslide electoral victory in May has given a major boost to the anti-nuclear movement in the United Kingdom and could have significant repercussions in the United States and other countries as well.

In a political sea change, Scottish voters elected Scottish National Party (SNP) candidates to 56 of their 59 seats in the British Parliament. The formerly predominant Labor Party was relegated to minor party status in Scotland.

These SNP representatives are now seated in Parliament and form the third-largest voting bloc, one with considerable leverage. They ran on a platform that included:

1) Ending the austerity cuts to social programs.
2) Removing the Trident nuclear submarines stationed in Scotland.
3) Remaining in the European Union.

The SNP is best known for spearheading the movement for Scottish independence. While their hard-fought referendum for independence was defeated in a 55-45 vote last fall, since then the SNP has been gaining in popularity. Other issues the SNP espouses clearly resonate with Scottish voters, including opposition to the four Trident nuclear-armed submarines stationed at Faslane on the River Clyde near Glasgow.

“All of Britain’s nuclear weapons sit like an evil demon perched on our doorstep,” according to Bill Kidd, an SNP member of the Scottish Parliament, Glasgow Anniesland. “[They’re] like a sword of Damocles hanging over our heads and capable of killing everyone and environmentally ruining our beautiful land and lochs forever.” 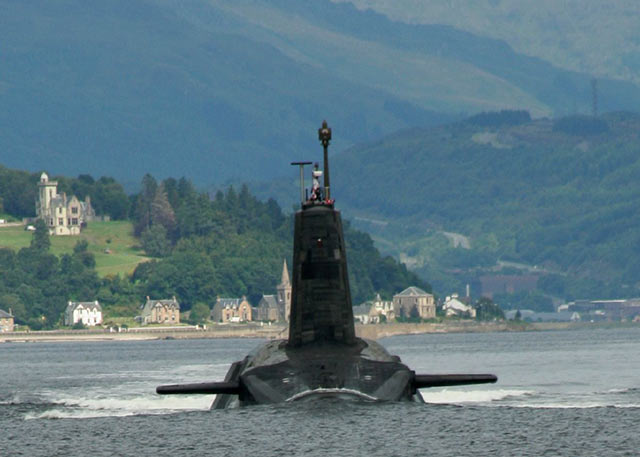 A British Trident nuclear-armed submarine leaving its base on the Clyde. (Photo: bodgerbrooks)

Kidd was speaking at the International Peace and Planet Conference in New York City in April, convened by peace organizations to coincide with – and influence – the five-year UN Review Conference of the Nuclear Non-Proliferation Treaty (NPT).

Kidd made clear that the anti-nuclear and economic goals of his party and the voters are inseparably linked. “The opposition to austerity and the opposition to the replacement of 100-billion-pounds-worth of nuclear weapons are going hand-in-hand in Scotland,” Kidd said. Some polls have shown that a majority of Scottish voters and the British populace at large oppose the replacement of the aging Trident missiles.

The presence of the SNP in Parliament strengthens the broad-based mobilization being waged by the Campaign for Nuclear Disarmament (CND) to defund the UK’s Trident program and invest that money in much-needed civilian programs.

During a recent visit to the CND’s London headquarters, we spoke with CND’s dynamic general secretary, Kate Hudson. She said the SNP victory was an exciting development in the anti-Trident movement, marking a “mass radicalization” of the Scottish people. This issue will be fought out in Parliament in the coming months and will influence nuclear disarmament talks not only in the UK, but also in other nations armed with nuclear weapons.

Despite headlines that focus mostly on preventing other nations such as Iran from obtaining nuclear weapons, the main military danger facing most people on the planet today lies in the arsenals of the nine nations that possess nuclear weapons: the United States, Russia, China, India, Pakistan, North Korea, the UK, France and Israel. The US and Russian arsenals each have more than 4,500 armed nuclear warheads, enough to obliterate every major city on earth. If a single US Ohio-class submarine launched its 24 Trident missiles, each with 12 independently targeted warheads – either by accident or intentionally – the detonations could bring the entire earth into a nuclear winter, creating global famine.

While social spending is regularly being slashed, there is apparently no austerity for weapons of mass destruction.

Nonetheless, the Obama administration has recently pledged to spend hundreds of billions of dollars over the next few decades to modernize the US nuclear arsenal, a policy that will be both wasteful and provocative. These are tax dollars that would be much better spent on housing, public transit, biomedical research, health care, education and public infrastructure. While social spending is regularly being slashed for poor and working families, there is apparently no austerity for deadly and sophisticated weapons of mass destruction. In fact, the only way that Congress can finance the nuclear weapons modernization is to cut budgets for civilian human needs programs.

However, the intense push in the US and UK to modernize their nuclear weapons arsenals is not going unchallenged – either domestically or in the international arena.

During this past May and June, delegates from 188 of the countries that have signed the 1970 Nuclear Non-Proliferation Treaty (NPT) gathered at the United Nations for the latest review conference of the treaty, which takes place every five years. The original treaty was signed by the United States, Russia, China, France and the UK, together with 120 other nations (including Iran) who promised never to acquire nuclear weapons. At present, 190 countries are signatories, although Israel, India, Pakistan and North Korea have not signed.

Article 6 of the treaty affirms that nations with nuclear weapons will make good faith efforts to immediately begin dismantling their nuclear arsenals. Forty-five years later, no such steps have been taken. In fact, the NPT conference ended with almost no progress. The United States and Israel blocked a motion to establish a nuclear-free zone in the Middle East.

Just prior to the NPT review conference, with the 70th anniversary of the US bombing of Hiroshima and Nagasaki approaching, thousands of anti-nuclear activists and peace crusaders from around the world convened in New York City for the international Peace and Planet Mobilization for a Nuclear-Free, Peaceful, Just and Sustainable World.

Speaker after speaker – from Japan, including survivors of Hiroshima and Nagasaki; from the Marshall Islands, where nuclear weapons tests caused widespread illness and birth defects; from Norway and many other countries – decried the lack of progress in nuclear disarmament. Bill Kidd noted, “Our civil society, our trade unions, our churches and almost all of our politicians have stated their opposition to nuclear weapons. Yet, not only are they still there, but the British government is planning to replace and upgrade these weapons, starting next year, for another 50 years.”

Kidd said there are no other suitable sites for nuclear submarines in the British Isles, and thus removing them from Scotland would mean ending the UK nuclear program. “That means that one of the Permanent 5 on the [UN] Security Council for the first time would not have nuclear weapons,” he said to applause. “That’s our aim.” Such a feat would be a significant step forward in realizing the NPT goals and would certainly reverberate in the United States and other nuclear-armed countries.

Even before the victory of the Scottish National Party, the UK had the most developed and sophisticated campaign against nuclear weapons among the nuclear powers, embodied in the Campaign for Nuclear Disarmament. The CND was launched in the 1950s. It has 35,000 members (hundreds of thousands if the members of affiliated organizations are counted) and is financially supported by its members, with no need to rely on foundation grants, Kate Hudson told us.

In recent years, especially since the financial meltdown of 2008, it has pursued a two-part strategy: fighting austerity and challenging the Tory arguments that Trident is necessary for defense. The CND has joined forces with the broader anti-austerity movement and demonstrated that cuts in Trident are necessary to fund civilian programs. The campaign focuses on constituencies that are hurt by the austerity budget. Thus, their outreach to students takes the form “Cut Trident, Not Education” and to trade unions, “Jobs, Not Trident” and to health care workers, “National Health Service, Not Trident.” The Trident issue will come before the new Parliament sometime next spring.

“Saying ‘Keep the Local Hospital Open’ is much less abstract than just talking about the 100 billion pounds that Trident will cost,” Hudson said. This two-track strategy provides a valuable blueprint for the US disarmament movement.

Model for US Peace Movement

However, within the United States, we have a long way to go to develop the kind of robust and broad-based campaigns of the CND. Today, organizations focused on nuclear disarmament often have a hard time engaging the younger generation, unlike the movement against the Vietnam War. However, the emergence of new social movements such as Black Lives Matter could open the door to possibilities. The deep cuts in federal housing, nutrition and unemployment programs required to finance weapons upgrades fall heaviest on this sector of our community. We should harken back to the vision of Dr. Martin Luther King Jr. toward the end of his life, when he called on the US to oppose the triple evils of racism, militarism and capitalism, as we strive to build a re-energized, youthful, multiracial peace movement.

Historian Vincent Intondi has provided us with a blueprint, in his recent book African Americans Against the Bomb. Intondi illustrates the critical role played by Black leaders in the civil rights movement against the development and use of the atomic bomb. From Bayard Rustin’s campaign to stop France from testing the bomb in North Africa, to King’s historic speech against the Vietnam War at Riverside Church, civil rights leaders were central to the growth of the peace movement. Our histories and struggles are intricately linked. They serve to remind us that we need to break the silo mentality and connect these seemingly diverse but deeply interdependent movements.

Share
Copyright, Truthout. May not be reprinted without permission.
Jonathan King

Jonathan King is professor of biology emeritus at the Massachusetts Institute of Technology, co-chair of the board of directors of Massachusetts Peace Action and co-chair of its Nuclear Disarmament Working Group.

Andrew R. King is a Ph.D. candidate in public policy at the University of Massachusetts, Boston. He has been involved in Latin America solidarity work for years and has published in Truthout, Venezuelanalysis and Black Agenda Report.