Other news in the survey is mixed. The number of people involuntarily working part-time fell by 406,000, the third consecutive month of sharp declines. On the other side, the unemployment rate due to job leavers fell by 0.4 percentage points, suggesting workers lack confidence in their job prospects. The unemployment duration measures edged down slightly, but did not completely reverse the jump seen in October. The percentage of workers experiencing long-term hardship, a fuller measure that includes people who have left the labor force, is near 7.0 percent, roughly twice the share of workers experiencing long-term unemployment. 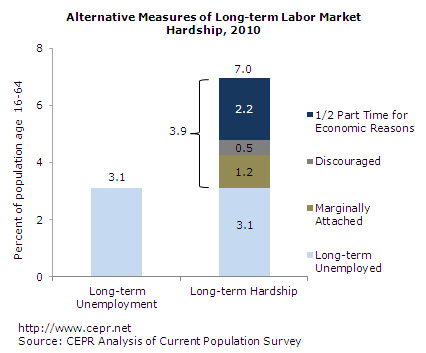 The sharp drop in the unemployment rate over the last four months (from 9.1 percent to 8.5 percent) is not consistent with the job growth reported in the establishment survey. The survey reported 200,000 jobs in December; however, this figure is skewed by the 42,200 job gain reported for couriers. There was a similar gain in this category reported for last December, which was completely reversed the next month. Clearly this is a problem of seasonal adjustment, not an issue of real job growth. Pulling out these jobs, the economy created 158,000 jobs in December, in line with expectations.

Pulling out the courier jobs, growth has averaged 145,000 per month over the last four months. This is somewhat better than the 90,000-100,000 a month needed to keep pace with the growth of the labor force, but certainly not rapid enough to explain a 0.6 percentage point drop in unemployment. At this pace, we would not get back to pre-recession levels of unemployment until 2027.

Among the sectors showing good job growth were durable manufacturing, which added 23,000 jobs; retail—27,900 jobs; health care — 22,600 jobs; and restaurants — 24,000 jobs. The manufacturing number is encouraging, but may be a blip as there was almost no growth reported in November. Retail has been adding jobs at a healthy pace over the last four months. Some of this may be the result of more emphasis on the holiday shopping season than in prior years, but growth in the sector is likely to continue. Government employment fell by 12,000, driven by a loss of 14,000 jobs at the local level. This is somewhat slower than the 23,000 rate of job loss over the last year.

Construction added 17,000 jobs in December, but this follows a loss of 27,000 in the prior two months. Most of this movement is likely the result of weather against a backdrop of near flat employment. One discouraging sign is the loss of 7,500 jobs in the temp sector, this does not indicate that employers are about to start hiring in a big way any time soon.

The pattern of weak job growth in the establishment survey suggests that the drop in unemployment reported in recent months is a fluke. We can expect to see rising unemployment in the months ahead.