Independent media will be an essential lifeline next year. Make sure we’re there to bring you the truth about 2017: Make a tax-deductible donation to Truthout today!

I arrived at Standing Rock in the very last days of May, alongside some comrades, at the request of Wiyaka Eagleman, the first firekeeper at Camp of the Sacred Stones and a founding member of the Keystone XL campaign. He had put out a call to folks in Indian Country for support, and I answered. Over the months, I have worked on the security and media teams and always had my camera.

These images show some of the defining moments of the past seven months — some that made it to mainstream media coverage and others unseen until now. Among the ever-growing lessons this place has taught me is what it means to simultaneously build and tear down. The life we have built here has taught many how to live a large-scale sustainable, decolonized, anticapitalist lifestyle that until now academics, sociologists, theoreticians, and greenies alike have only been able to hypothesize. I live full time in a yurt at Oceti Sakowin Camp.

At its peak, Oceti Sakowin Camp has supported as many as 11,000 people, all focused on standing in solidarity with the Lakota, Dakota, and Nakota people who lay claim to land through the 1851 Treaty of Fort Laramie. Both the pipeline and the camps are on these lands. 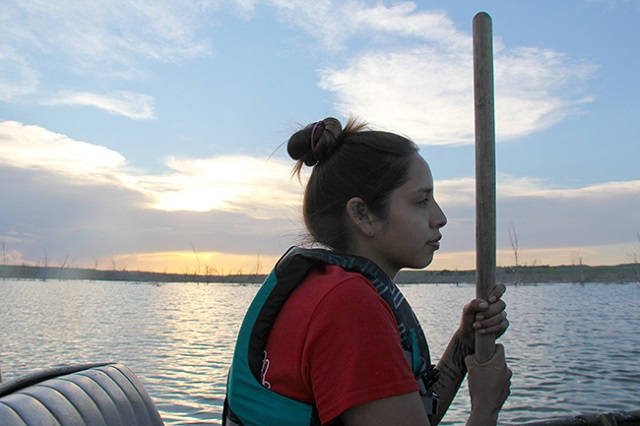 This photo essay starts on Lake Oahe with Bobbi Jean Three Legs, one of the local youth runners who were the genesis of the #NoDAPL movement. They led a 2,000-mile run from Standing Rock to Washington, DC, and that’s when mainstream media first started to take notice of what was happening on the Standing Rock Sioux reservation.

By early June, Dakota Access was already laying its pipe close to the river on the east side, directly across from what was then only Camp of the Sacred Stones. At that time, 20 mostly local water protectors were there full time or very regularly. One of them was Bobbi Jean Three Legs. This is a shot from a boat ride I took with her and six others. It was one of the first nonviolent direct actions against the pipeline. Downstream are 18 million other people who depend on the water. 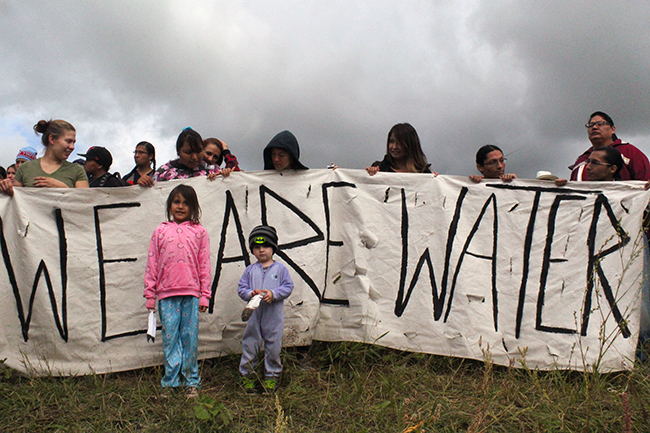 By late July, Oceti Sakowin Camp was established, beginning as the overflow camp for Sacred Stone. The camps seemed to balloon with visitors overnight. What once was a small encampment quickly became 800, then 2,000. Rosebud Camp was also established. People brought their families, their offerings, and their open hearts. The powwow drum went into the early morning hours each day. Native nations arrived at the camps to stand in solidarity with the Standing Rock Sioux, and this added to the growing numbers.

In August, construction workers in St. Anthony, North Dakota, were unable to lay pipe because Dale “Happi” American Horse stood locked down to a trackhoe. Happi and many members of what would later become the International Indigenous Youth Council were able to stop pipeline construction for the entire day and once again put #NoDAPL into the national spotlight. Officers from the Morton County Sheriff’s Department ultimately used a Sawzall to cut off his lock. Morton County filed felony charges against Happi. 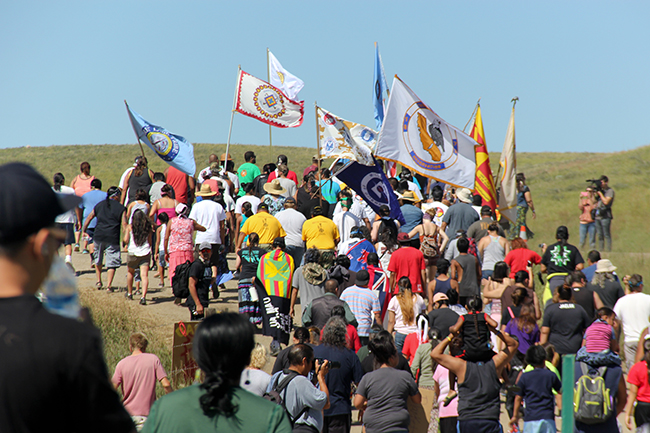 Daily prayer walks at noon initially went to the location where the pipeline company was trying to dig on sacred grounds. Construction workers were greeted by prayer warriors and the Horse Nation, who came to the front lines to pray for the land being dug up.

On Sept. 5, hours after the tribe’s lawyers filed papers in federal court notifying Dakota Access that their proposed pipeline path crossed sacred burial sites, the company dug up the site. Security officers used mace and dogs to attack water protectors — even children and elders — who had come to pray at the ancestral gravesites being desecrated.

After that, daily prayer walks began to go to the camp formed in the pipeline’s pathway, later called the 1851 Treaty Camp. On October 27, it was brutally cleared out, elders pulled out of ceremonial sweat houses. Police used mace and rubber bullets on both people and horses. 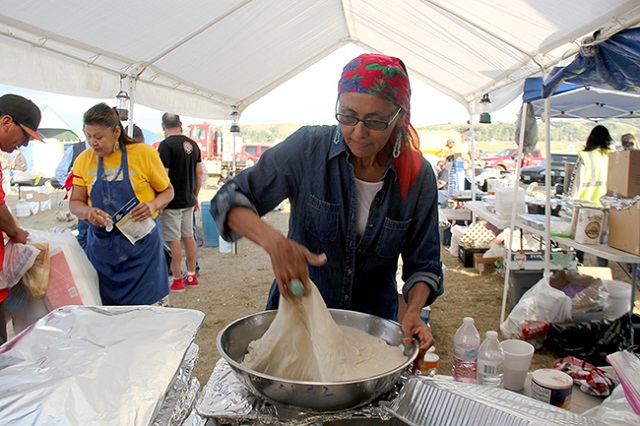 Osh Johnson makes traditional Diné (Navajo) fry bread. This is a good example of how this Indigenous Peoples’ movement grew: Indigenous nations across the globe banded together in support of the Lakota, Dakota, and Nakota people fighting for clean water and the treaty land that the Oceti Sakowin Camp sits atop.

On Sept. 16, National POW/MIA Recognition Day, veterans led a march on the Bismarck/Mandan Veterans Memorial Bridge. This was the first of many nonviolent direct actions the veterans group would lead. It was also one of the first times the movement saw the Standing Rock camp veterans rise up in a very public way.

The Role of Children 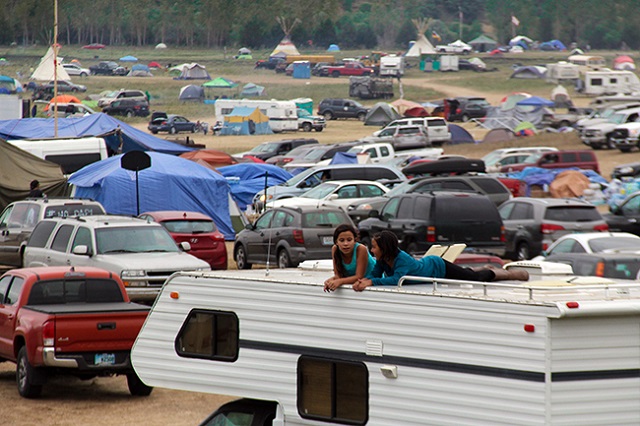 There was a baby born at camp named Mni Wiconi, which means Water Is Life. There were also many children born into the movement through their experience visiting or living at the camps. Despite increasingly smothering state violence and harassment, there were always safe spaces for children to develop and learn traditional knowledge. A state-registered home school was established for younger kids. The children’s presence is a constant reminder of whose future so much sacrifice and struggle are for. 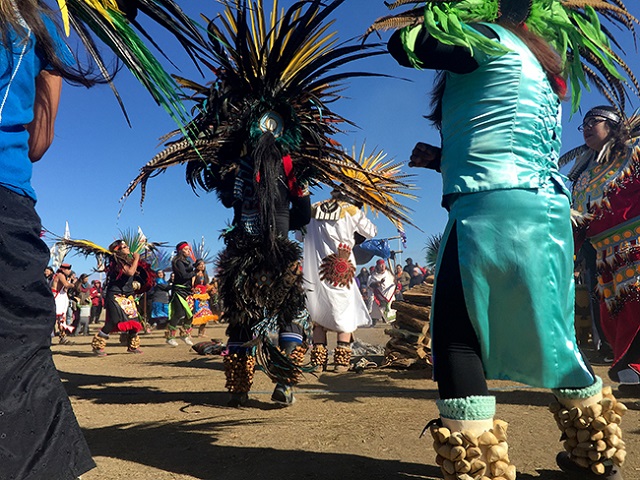 Indigenous people have poured in from all over the world, both from north and south of the United States as well as from Africa, Australia, Asia, and the Middle East. This image from October shows Aztec dancers from Central Mexico who brought song and dance to the camps. 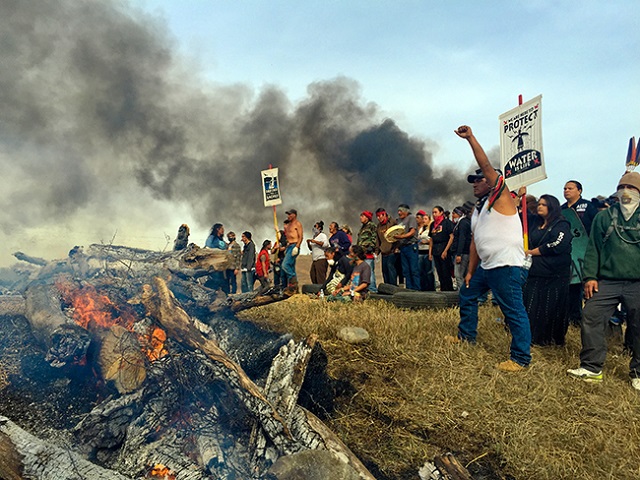 During the brutal Oct. 27 law enforcement raid on the 1851 Treaty Camp, a small band of water protectors, led by an even smaller number of veterans, refused to allow police to cross the bridge here to join the raid. An estimated 250 police were held up. 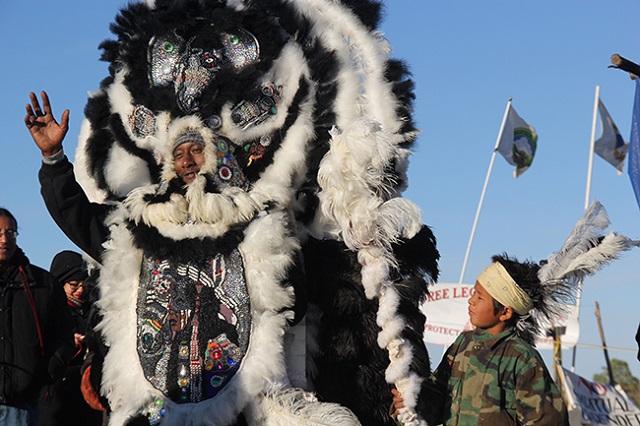 The historically significant relationship between African Americans and Native Americans has been mostly neglected by history books. Here, a group from New Orleans of mixed Native and African heritage greets the Oceti Sakowin Camp community around the Sacred Fire, coming together in shared spiritual resistance.

Unarmed water protectors stood up to law enforcement often over the right to give ancestral offerings to the Lakota/Dakota/Nakota buried on top of the hill, called Turtle Island, the spot where officers can be seen standing in this image. This is treaty land. Water protectors helped folks who wanted to get across the river and held protective circles around those wishing to pray. 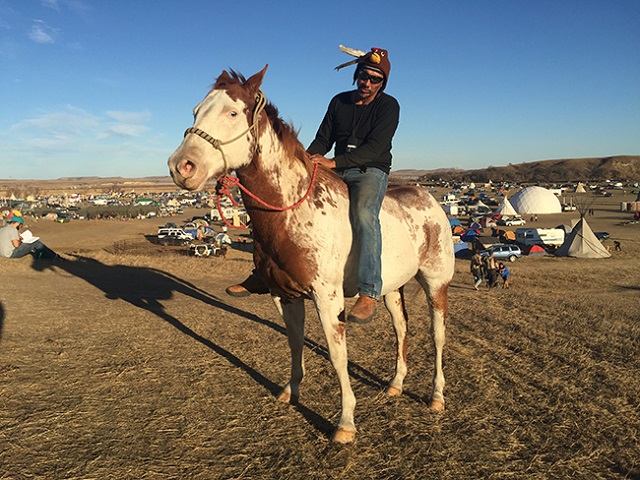 Jimmy White, 52, is a veteran from the Cheyenne River Sioux tribe, nicknamed Angry Bird. He has helped the camps with security, among many other things.

“[Camp] gave me a feeling of relaxation and serenity. It made me feel in my heart the sides of me that I hid all the time. It made me be more open.

“Usually, the security force’s job is to stay cool and not pick sides. We have to use our judgment to hold our feelings back and do the task we’re trained to do. When you’re asked to stand at a post, you do it. A lot of us as young warriors, we had to prove ourselves to the elders, and the veterans have high standards among ourselves.

“Really, this battle isn’t just about the pipeline. Us guys are tired of being pushed around. We’re humans, too. We’re tired of the injustice we’ve been living all our lives, and this fight gives us that chance. After this fight, there’ll be another one out there to fight, another injustice to fight.” 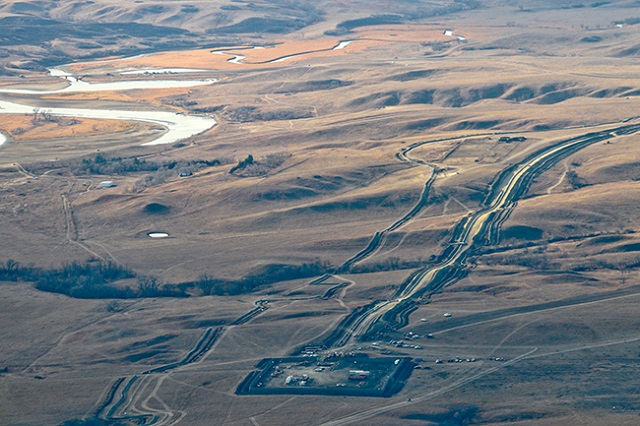 I took this photo from a small plane with an volunteer pilot just above the no-fly zone placed over the pipeline, camps, and surrounding areas. Dakota Access repeatedly broke this order and flew surveillance planes and helicopters well below 3,500 feet, harassing water protectors by air and over radio frequencies. Water protectors keep an eye on the west side drill pad, where Dakota Access proposes to run the pipeline under Lake Oahe. It’s less than a mile north of Oceti Sakowin Camp. 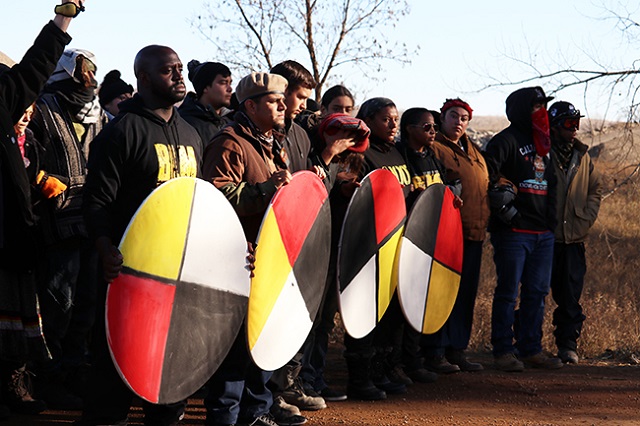 Representatives from the American Indian Movement-Oceti Sakowin Chapter, Black Lives Matter Global Network, The Indian Problem, The Brown Berets, and LA RED PICO gathered to stand with #NoDAPL water protectors. This group and others joined for prayers and words of solidarity outside a Dakota Access pipeline supply yard, blocking all entrances and exits and effectively halting construction. This was the only nonviolent direct action ever to have the organizers honored around the Sacred Fire at Oceti Sakowin Camp. 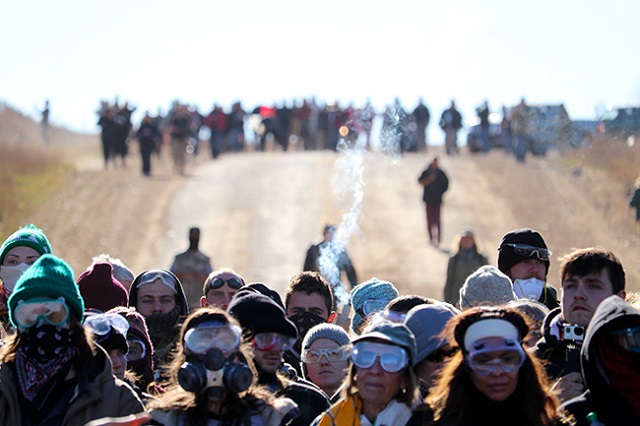 The American Indian Movement-Oceti Sakowin Chapter, The Indian Problem, Black Lives Matter Global Network, The Brown Berets, and LA RED PICO organized the group of White allies seen here with locked arms, prepared for extended police violence. It was a successful effort to protect a water ceremony held at the entrances and exits of a Dakota Access pipeline supply yard. Meanwhile, when a man fired eight rounds from his handgun while driving a concrete truck toward a water ceremony, these allies stopped him from further threatening anyone, and the ceremony continued.

This same coalition of allies would later do the same thing to protect a water ceremony and prayer circle inside the Kirkwood Mall on Black Friday.

This is what it looks like when conscious White Americans come to protect people of color exercising the freedom of speech, right to assemble, and religious freedom guaranteed by the Constitution.

US Rep. Tulsi Gabbard, herself an Iraq War veteran, greets many of the 4,000 Native and non-Native veterans who came as part of the Veterans Stand with Standing Rock campaign the weekend of Dec. 5. The field muster was hosted in the nearby community of Cannon Ball, North Dakota. 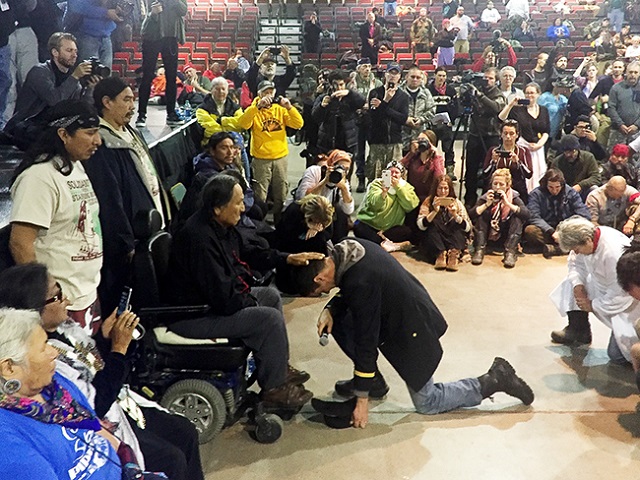 Wesley Clark Jr, an Army veteran and son of Gen. Wesley Clark, former Supreme Allied Commander-Europe of NATO, is shown here flanked by hundreds of military veterans. He and others are kneeling and asking for forgiveness from Leonard Crow Dog, a Sicangu Lakota spiritual leader well known for his work at Wounded Knee on the Pine Ridge Indian Reservation in 1973 and one of the founders of the American Indian Movement, for the war crimes committed by the US military against Indigenous Americans throughout history.

“Many of us, me particularly, are from the units that have hurt you over the many years. We came. We fought you. We took your land. We signed treaties that we broke. We stole minerals from your sacred hills….We’ve come to say that we are sorry. We are at your service and we beg for your forgiveness.” 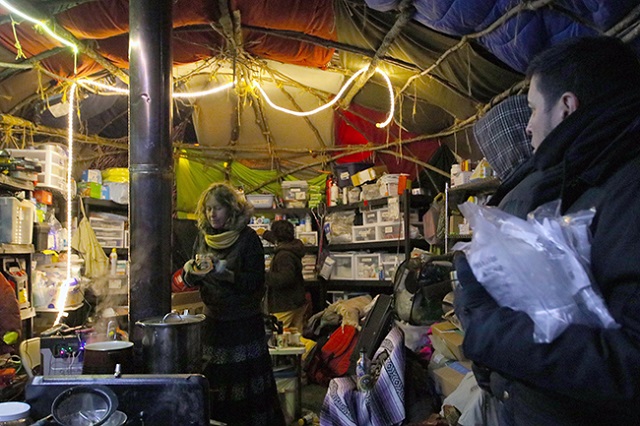 The first of many big blizzards hit the camps in December, and the population now hovers between 500-600 people. Here, an organizer gathers medical supplies from the Sacred Stone medic’s tent for making camp-by-camp health, safety, and search-and-rescue checks.

Winterization of camp was something that started months ago. Elders warned of the perilous times ahead and after 55 degrees below zero and whiteout conditions hit 1851 Treaty Territory, those who have remained are the toughest. Many live in tipis and yurts, both traditional Indigenous housing styles made for extreme cold weather. A common saying around camp from those who live there is, “I came here to kill the pipeline, not to reroute it.” The struggle continues.

Desiree Kane is a Miwok woman and multimedia journalist focused on producing stories with a conscience at the intersection of Indigenous peoples, energy production and the environment.