“Incarcerated women’s writing and publishing serve a dual purpose: to challenge existing misconceptions and correct stereotypes… and to boost self worth in a system designed to erase all traces of individuality.”—Victoria Law, Resistance Behind Bars

Tweeting as @xychelsea, her Twitter bio describes her as a “Former Intelligence Analyst. Trans Woman. Prisoner.”

Chelsea Manning became the most famous prisoner on social media after she was sentenced to 35 years in Leavenworth military prison for leaking some 750,000 classified documents. Manning tweets by proxy — meaning she relays her thoughts via voice phone to representatives who maintain her Twitter account from beyond prison walls. With regard to the Orlando nightclub murders, Manning recently messaged, “Please stop using our bodies, blood, and pain for politics and profit ='( #LGBTQ #pulseshooting”

Because of “security concerns,” just a handful of US institutions are experimenting with allowing prisoners limited access to the internet and social media. According to Howard University Researcher Tamanika Ferguson, author of the women’s studies project titled “Women in Prison Speak: Writings by Incarcerated Women and their Advocates,” most incarcerated writers turn to newsletters produced on the outside or academic journals to tell their stories. 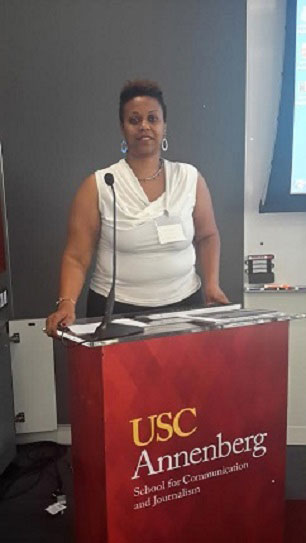 Howard University Researcher Tamanika Ferguson lectures on prisoners and social media at the University of Southern California, June 24, 2016. (Photo: Robyn McGee)Ferguson’s inspiration for studying the ways women in prison communicate was born through her experience as a Black girl growing up in inner city Los Angeles, where she witnessed and experienced the impact drug dealing, gangs and incarceration had on her family and community. Ferguson said, “I saw my female family members being locked up and I understood at an early age the general perception that women in jail are bad people and should not be allowed to speak out about the circumstances that contribute to their confinement and how they are treated in jail.”

CeCe McDonald, a Black trans activist, was jailed in two men’s prisons for 19 months after being convicted of second-degree murder of a man who was attacking her. While she was incarcerated, the CeCe Support Committee created a blog and website to keep the public updated on her status, and regularly posted her writings. After her release, McDonald wrote the foreword to Captive Genders: Trans Embodiment and the Prison Industrial Complex edited by Eric A. Stanley and Nat Smith:

“I was a trans woman, surrounded by so many men … but they wanted to know who I was as a person,” McDonald wrote in her foreword. “This surprised me because the media portrays people in prison as angry, evil, and deceiving. For me it was the opposite — those behaviors came from the staff.”

As technology allows for more avenues for prisoners to communicate with the outside world, Ferguson’s research seeks to expand on Michelle Alexander’s groundbreaking book, The New Jim Crow, which addressed the consequences of mass imprisonment of Black men in the US. According to the International Centre for Prison Studies’ 2013 report, 201,200 women are incarcerated in the US — almost one-third of the world’s documented female prison population. Ferguson says, “Their voices and stories must be told and heard.”

Share
Copyright, Truthout. May not be reprinted without permission.
Robyn McGee

Robyn McGee is a Los Angeles-based author and women’s studies professor. Her work has appeared in Bitch Media and Seventeen Magazine. Robyn’s groundbreaking book Hungry for More focused on the struggles and triumphs of Black women relating to weight and body image. Her op-ed “Trend Toward Social Media Activism in Prisons Gains Steam” appeared in Truthout in July 2016. Follow her on Twitter: @robynmarie2015.