The horror of the incoming presidential administration has caused workers’ rights advocates in the United States to brace themselves for what is to come. In view of the appointments that Donald Trump has made to his cabinet, the new administration appears on the side of reversing progress made during the Obama administration for workers, including laws to ensure that more people earn overtime and the Department of Labor’s commitment to ensuring that wage violations are investigated.

One labor rights issue that gained traction during the Obama administration was labor protections for domestic workers — nannies, caregivers and housekeepers — who have historically been excluded from basic US labor protections. Reforming federal overtime laws to finally include domestic workers, as well as piecemeal immigration reform through Deferred Action programs, are among the key Obama policies that could improve the lives of domestic workers, many of whom are low-income immigrant women. These protections could face backlash at the federal level during the Trump administration.

Yet over the long term, attempts to restrict labor protections for domestic workers are unlikely to succeed. Why? Domestic worker activists have demonstrated their power in local and state-level coalition building. Indeed, their core work lies in fostering values and building dialogue that often transcends party lines. Domestic worker advocates are planting seeds for the future.

For example, Oregon’s domestic worker legislation, which passed in 2015, had a chief sponsor who is a Republican — State Sen. Tim Knopp.

“It was clear after hearing testimony from Oregonians that provide live-in domestic services that there’s exploitation of these hard-working, low-wage workers occurring. It was also clear that in some cases, human trafficking was occurring,” Sen. Knopp told Truthout. “I wanted to make sure that in the future domestic workers, 95 percent of whom are women, including many women of color, here in Oregon had the same freedom as workers in other jobs.”

Knopp and his wife started a cleaning business in 1986 that provided many of the services that domestic workers provide. His firsthand experience with this sector contributed to his support for these labor protections.

“Although [my company] didn’t provide live-in services, we do understand how hard domestic workers are working to make a living,” Knopp said. “I believe establishing state-level labor protections is important for domestic workers because, in my view, it is never appropriate for an employer to hold onto the passport of an employee, and our legislation made that illegal. Additionally, I felt strongly that workers needed protections against sexual harassment, as well as protections regarding overtime and rest periods…. Domestic workers provide needed and valuable services and should be respected while providing those services, and Oregon’s law makes sure there’s a standard to ensure that happens.”

Oregon’s law offers a broader range of protections than many other states’ domestic workers’ bill of rights, securing domestic workers overtime pay for working more than 40 hours a week (or 44 if they live in their employer’s home), meal and rest breaks, 24 consecutive hours of rest each week or eight hours of rest every 24 hours for live-in employees. Workers are also entitled to three paid days off per year. Oregon Rep. Sara Gelser, a chief sponsor of the bill, noted that the bill ultimately received strong bipartisan support in the Oregon state senate.

“[Sen. Knopp] was an incredible ally on this piece of legislation and it was a delight to work with him. It was fun to have a labor issue that brought us together across party lines,” Sen. Gelser told Truthout. “In terms of the future, I believe that progressive legislation really is going to be initiated at the state level. [Domestic workers’ protections] is an issue that, at its core, should not be partisan. This is about ensuring some of the most vulnerable people in our workforce have access to the basic labor protections most people believe everyone enjoys.”

Connecticut domestic worker activists have also engaged in conversation with Republican state legislators and secured key Republican support for their 2015 bill protecting domestic workers from discrimination and harassment, which has now become law.

“We had a huge turning point while advocating for our 2015 legislation,” said Natalicia Tracy, executive director of the Brazilian Worker Center, who is a former domestic worker and a leading advocate for domestic workers’ rights in Connecticut. “Originally, Republicans had refused to talk with us. This evolved to us having the Republican minority whip Sen. Len Fasano listening to our testimony, bringing us water and a basket of corn muffins while we were lobbying all night, and helping us track down the Senate president to build support for our civil rights provision. We spend time in these legislators’ districts and get to know them better there, so the relationship at the local level has more potential to become favorable.”

These relationships with legislators across party lines helped the Brazilian Worker Center defeat bills in 2016 that would have excluded au pairs from labor protections. Both their bipartisan successes and the personal relationships they’ve built with local legislators are giving some domestic worker activists hope that the Trump administration won’t halt their momentum.

“Maybe, despite everything happening nationally, we can build support for our work,” Tracy said. 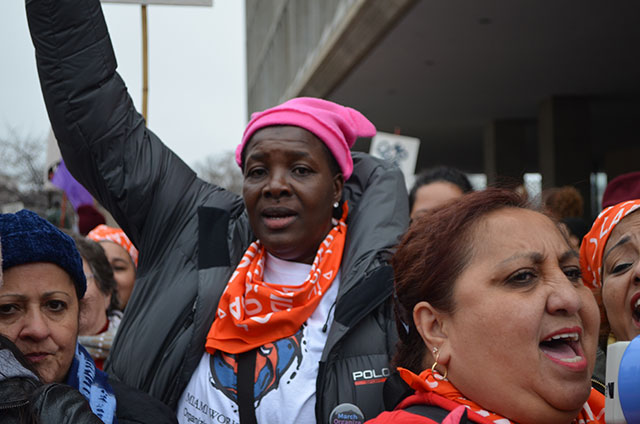 Domestic worker June Barrett, who has been organizing against anti-immigrant and anti-worker policies in Miami, marches in Washington on January 21, 2017. “I believe that we will win,” Barrett says. (Credit: Jill Shenker, National Domestic Workers Alliance)

“Throughout history, domestic workers have had to be creative, to assert the dignity and value of their work outside of laws and institutions which actively exclude them,” Andrea Cristina Mercado, campaign director of the National Domestic Workers Alliance (NDWA), told Truthout. “This is a moment where we’ll be seeing a lot of creative actions and ways that we can defend our rights and our communities with the support of municipal and state governments.”

In terms of federal policy, it is unclear as of yet whether domestic workers’ labor protections will even be on the radar of the new administration. But if they do become an issue of federal focus, there is a lot to lose.

The Obama administration approved changes the Department of Labor (DOL) made to the Fair Labor Standards Act (FLSA), ensuring that home care workers are included within federal overtime and minimum wage law. These protections require that workers who provide “care” that exceeds 20 percent of the total hours they work each week will receive minimum wage and overtime protections.The rule applies to all home-care workers in the United States who are hired by agencies. The rule survived a legal challenge and became effective in late 2015.

The FLSA, along with most federal New Deal era labor laws, excluded domestic workers from these protections since they were first passed in the 1930s. Obama’s work on this issue (a largely under-the-radar progressive victory of his presidency) was significant particularly in light of this historical context.

Activists are concerned that the incoming DOL would roll these changes back. Indeed, the appointed DOL Secretary Andrew Puzder, the CEO of CKE restaurants (which include Hardees and Carl’s Jr. fast food chains) has shown disdain for worker protections, including the minimum wage and rest breaks.

In addition, Trump has made deportations and “building a wall” major components of his platform, and received a great deal of support around these issues. Many domestic workers in the United States are immigrant women, quite a few of whom are undocumented. A rollback of Deferred Action for Childhood Arrivals (DACA) combined with clear directives from the new president to deport more people would have devastating consequences for many domestic workers.

“We did make some significant gains [in immigration], and deferred action is an example of that. But Immigration and Customs Enforcement (ICE) is a rogue agency,” Mercado said, noting the fact that a historic number of deportations occurred during the Obama administration. “In this new administration, ICE will be empowered. We are anticipating an increase in deportations and detentions.” Trump is already making good on his promises to increase deportations and build a wall, which were core to his campaign platform.

With Trump’s rise, racism toward women of color who are domestic workers is a growing concern as well. Many members of NDWA-affiliate groups have reported an uptick in bullying in their children’s schools, according to Mercado. Trump and his cabinet have also demonstrated misogyny, including through devaluing domestic work in their personal lives.

“The State Department has taken significant strides to prevent and punish trafficking of domestic workers and we believe that those protections are now institutionalized and do not depend on the vagaries of who is in the White House,” Martina Vandenberg, president of the Human Trafficking Pro Bono Legal Center, told Truthout. “And trafficking of domestic workers by diplomats has been an acknowledged problem in the US and around the world for decades. Because of the egregious abuses, Republican and Democratic administrations have been forced to deal with this issue.”

The election is further galvanizing workers and their allies around the dangers posed by a Trump administration, and the way in which Trump has treated workers and women in the past. It is an opportunity that domestic worker activists are already poised to seize.

June Barrett, 53, is a Jamaican-born domestic worker and organizer in Miami. She has worked as a domestic worker since the age of 16, and has faced sexual harassment at the hands of employers.

“When Trump said he grabs women, I said I’ve been there, I was groped by a rich man who I was working for,” Barrett told Truthout. “I had to stay at this job until I got another one. It was a devastating situation for me.”

In many places where domestic workers are active, workers like Barrett are taking a chief role in the organizing, message development and movement building that, critically, helps educate employers of domestic workers and faith communities, and brings legislators like Knopp, Rauner, Althoff, Fasano, and others to the table.

Since the election, Barrett has been organizing workers with the Miami Worker Center to demonstrate outside Sen. Marco Rubio’s office to oppose anti-immigrant and anti-worker policies, and to express support for the Affordable Care Act (ACA) as Republicans begin the process of repealing the law. Barrett also joined the NDWA’s delegation of 200 at the Women’s March on January 21 in Washington, DC.

“We have [a] big national network, and everyone will come together in this moment,” Barrett told Truthout. “And I believe that we will win.”

Share
Copyright, Truthout. May not be reprinted without permission.
Sheila Bapat