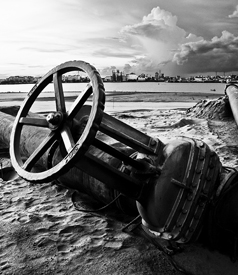 A lake development project is fueling thousands of forced evictions in the Cambodian capital.

Phnom Penh, Cambodia – There are plenty of guns in Cambodia, but I cannot get used to them being pointed at me, even in jest. After all, I’m just picking at my lunch, staring lazily at Phnom Penh’s biggest lake, Boeung Kak, and the massive sandy beach across the water. Two years ago, the area was thriving with fishermen. Now, the beach is moving closer to the spot where I sit, minute by minute. Most of the fishermen are gone.

The man with the gun stands, gesturing for me to follow him. He jerks his chin upwards as he strides down the open deck of the bar and restaurant of a one-time popular guest house in the seedy backpacker area of the city. His ruddy face projects menace, but only in an act of self-protection. “Is not real,” he asides of the rifle when we get to the edge of the water.

I look at the gun. It is carved from a solid piece of wood. It could kill someone, sure, but it cannot protect him from what is being stolen from him, even as we stand watching.

The capital city’s largest remaining natural lake is being filled in with sand to make way for a residential and shopping district. It’s sparked a wave of forced evictions known more commonly around the country as “landgrabbing,” kicked off by the city’s February 2007 agreement with Shukaku Inc., in which the company paid $79 million for a 99-year lease on the land. 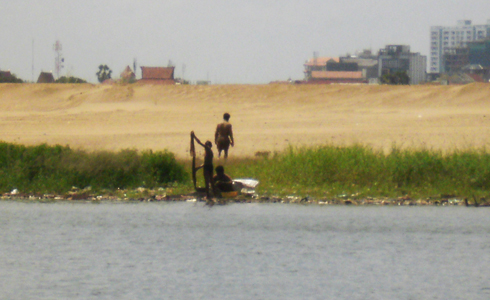 A Phnom Penh family, finishes fishing and chores on the banks of the polluted Boeung Kak lake, currently under development. The mass of sand behind them used to line the Mekong River. (photo: Anne Elizabeth Moore)

That is, the land invisible under the water. To make it useful for the development project, of course, Shukaku Inc. had to devise a way of getting to that land. So in late August 2008, a massive drainage pipe began pumping sand into the water at a rate of around 25 square meters per hour. Residents fled. Many had not been notified in advance.

I asked the restaurant manager if tourism would soon be affected, and my armed companion scoffs. “Is already,” he says in his rolling Khmer accent, waving the gun toward the sandy beach. As many Cambodians do, he declines to give his name to reporters out of fear of government retaliation. 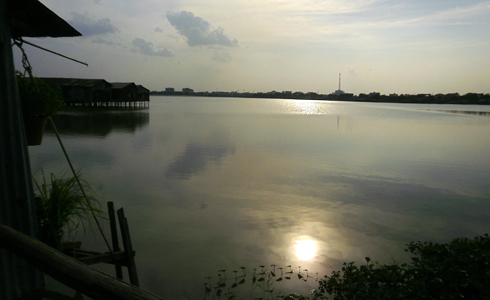 The back door of artist Leang Seckon’s studio overlooks Boeung Kak. Many lakeside residents are unsure when flooding, pollution, or landslides will force them to abandon their homes. (photo: Anne Elizabeth Moore)

This isn’t an idle fear, either: According to the local human rights group Adhoc, the number of arrests of human rights activists in Cambodia rose by about 70% in 2009. Most arrests were of people speaking out about housing and land rights.

“Before, this was a beautiful lake and people came from the city to watch the sunset. Maybe a part of this is also the amount of tourists coming to Cambodia, I don’t know. But now …”

He turns back and looks at the paltry number of customers lunching at the establishment. Two men argue over coffee, a young woman shoots pool in the corner. This is high tourist season in Cambodia. Other proprietors I’ve spoken to, in other tourist areas of town, have seen business pick up again after the previous year’s drop.

Part of the problem here could be the smell. Pollution was noticeable, but not overwhelming, when the lake was at its peak. Now, rising levels of rotting garbage, fish carcasses and raw sewage are plainly visible – and malodorous.

“… What to do?” The guest house manager finishes his thought.

In early February, 100 affected residents gathered at City Hall to protest the city’s handling of drainage at the construction site. Wastewater was backing up, they complained. One woman’s kitchen was entirely submerged, she told the Phnom Penh Post, and it was still the dry season. The city has so far failed to create an adequate drainage system for the construction sites.

In Cambodia, fetid water is not only unseemly. It’s also a health risk in a country plagued by malaria and Dengue fever.

Of course, the development project also violates several federal laws. A 2009 report from the Centre on Housing Rights and Evictions (COHRE), an international human rights organization, finds multiple causes for concern. Among them, that leases for state public property cannot change the function of land nor last for longer than 15 years. And, land over which people already hold titles, which have not been bought out in advance of the agreement, cannot be leased by third parties. Additionally, the report charges, evictions are only legally allowable under certain circumstances that do not include private development projects. (Resultant evictions are also found in the report to be in violation of international human rights law obligations.)

Secondary affects of the development project also concern local organizations. In May of 2009, Prime Minister Hun Sen halted all dredging of sand from the Mekong for export purposes due to environmental concerns, yet dredging for domestic purposes continues. A site directly across the water from Phnom Penh’s Royal Palace pipes sand into Boeung Kak. The Cambodia Daily reports that some dredging companies pull as much as 2,000 tons of sand from the riverbed daily, but no official records are maintained.

In residential areas near dredge sites, homeowners report riverbank landslides coinciding with sand pulls. Many have been forced to move from their traditional stilted homes, concerned their families will one day tumble into the water. (These figures are not counted in displacement statistics.)

The Ministry of Environment claims that the amount of removed sand is recovered annually. The landslides, it charges, are caused by natural erosion.

It’s this kind of official response that has my friend with the wooden rifle frustrated. He’s been to meeting after meeting, and signed petition upon petition. All to no satisfaction. “I wish I could go to the government,” he says and he looks over at the encroaching sand.

Across from us, three of the last remaining handful of fisherman that work the lake shuffle something small from the water in their bamboo baskets, even as more land piles up behind them. Figures on how many people made their living selling fish from this lake are unavailable, as are the number of people who sustained themselves almost exclusively by eating their catch, or picking the vegetables that grow along the lakeside.

In 2007, city authorities claimed that only 600 people would be affected by the development project; that number has been surpassed. NGOs place the number of persons displaced at between 4,250 and 30,000 people. The city has offered some families three choices: move to the northeast corner of the city, into government-approved housing projects still under construction; take an $8000 lump payment in compensation, far lower than the market value of their property; or wait until alternative housing is built in the neighborhood.

Other families have simply seen their houses crumble, with no advance warning from construction crews or government officials.

Artist Leang Seckon hopes this doesn’t happen to him. His studio opens onto the lake thousands of Cambodians have called home ever since the Khmer Rouge regime ended and people started moving back into the city 30 years ago. Born in the provinces, Seckon spent the first ten years of his life in the rice fields. His work often touches on the environmental issues that are close to his heart.

“I need nature, I need water, I need”-here he breathes deeply- “fresh air.” He’s excited that the government has made recent moves to cease illegal logging and halt some sand-dredging from the Mekong. But he’s received no notice about when he’s expected to vacate the space he’s worked in for 18 years.

His studio sits north of the backpacker district, so he probably has a little more time. He just doesn’t know how much. “Now the company buy the lake, and destroy the lake. Soon-I don’t know when but soon-they build a city.”

Land prices in Phnom Penh have increased tenfold in recent years. Prices are expected to rise even more as high-profile projects like the country’s first-ever skyscraper, Gold Tower 42, are completed as soon as 2012. The country may be under development, and it’s clear that some are seeing benefits from the boom. But others wonder who is paying the real price.

More upset at the loss of the city’s natural resource than the loss of his studio, Seckon considers the matter. “I not feel happy at all,” he declares.

Little is known about the company behind the development project, Shukaku Inc. Some press reports have linked it to Cambodian People’s Party Senator Lau Meng Khin, also a close friend of Hun Sen. Chinese investment has been linked to the controversial project, but South Korea has denied any involvement. South Korean interests are behind many development projects in the city, including Gold Tower 42.

“It’s got to be developed,” my weaponed associate proclaims of the city from the deck of the guest house. He then outlines a plan where the lake is cleaned of pollution instead of filled, and the ramshackle guest houses in the rundown backpacker district are funded to make improvements. “It’s good for tourism,” he offers.

This should count for something. Alongside the construction/real estate sector, tourism is one of the fastest-growing industries in the country. It’s the justification for a handful of new public works projects in the city, such as Watermusic, a light show and fountain timed to blaring pop songs that draws local-and tourist-crowds every weekend night.

The guest house proprietor’s revitalization plan, he says, has been incorporated into various official proposals for years. Still, it’s gotten nowhere. Rather, as my armed companion explains, the powers that be just don’t like it.

“I’m sure the government don’t think the same,” he says, using the Khmer phrase more properly translated as, “agree with us.”

But there is more than a difference of opinion at stake. He rests his prop gun against a table and refuses to comment on the friends and neighbors who have already been forced to move. Where they are, how they’re adjusting, what businesses they’ve gone into: he doesn’t want to say, for fear he’ll be labeled a political agitator.

Or maybe his fear is more personal. Soon, he’ll have to close down the guest house and join them, he says.