Senator Jon Kyl, R-Arizona. (Photo: Talk Radio News Service / Flickr)Republicans are playing a trick on people with the negotiations over the budget and threats to shut down the government. On the one hand, they are threatening to shut down the government over “Obamacare.” On the other hand, aside from Obamacare defunding, they are offering a terrible “keep the government running” budget resolution that doubles down on the terrible “sequester” austerity cuts – while actually increasing spending for military.

And this doesn’t even include a $40 billion cut to the Supplemental Nutrition Assistance Program (SNAP) – known as “food stamps.”

These are real people, real families and real businesses on the line. They will be badly hurt if Obamacare is killed, badly hurt by a shutdown or badly, badly hurt by these cuts. And this is all so taxes can be lower for the 1 percent. These are the choices offered to America by these extremist Republicans.

House Republicans are passing a “continuing resolution” budget but only through the end of the year. This budget defunds the Affordable Care Act, and not only continues the “sequester” cuts but adds to them – all while increasing military spending by $20 billion.

Unless they give in and make changes this will mean a shutdown of the government that ramps up beginning October 1.

On top of this, Republicans are cutting $40 billion from the SNAP program. So on one hand, they propagandize that the “Obama economy” is hurting people, and then they cut assistance to the people who are hurting, claiming they don’t really need it.

Slow-To-No Recovery Due To Budget Cuts

The sequester has already cost 900,000 jobs, and will cost 1.6 million through 2014 – before the new additional cuts. These budget cuts are hurting families. In Santa Clara County, California, the sequester already means 18,000 families face homelessness right now, and that’s just one county out of 3,144 counties in the U.S.

According to the Center for American Progress (CAP), in “The Dirty Truth About Boehner’s ‘Clean’ Continuing Resolution,” “funding for all nondefense discretionary accounts” has already suffered “a 15 percent real reduction from just three years ago” even before taking into account population and (anemic) economic growth. So total “nondefense funding” spending levels were already down about 7 percent before the sequester cuts.

The result of these cuts? According to CAP,

These spending cuts have not been kind to the U.S. economy. The contraction in federal government consumption and investment has caused a direct drag on economic growth in eight of the past 10 quarters… the unemployment rate remains greater than the level most forecasters had predicted three years ago, when Congress began cutting federal spending. … median household income today is lower than it was when the Great Recession technically came to a close in June 2009.

Direct government job cuts are taking a terrible toll on the economy and recovery. This chart shows how the reduction of the number of public employees is hampering the jobs recovery. Approximately 737,000 public-employee jobs have been lost since the 2008 crash, while government hiring boosted the economy after previous downturns. 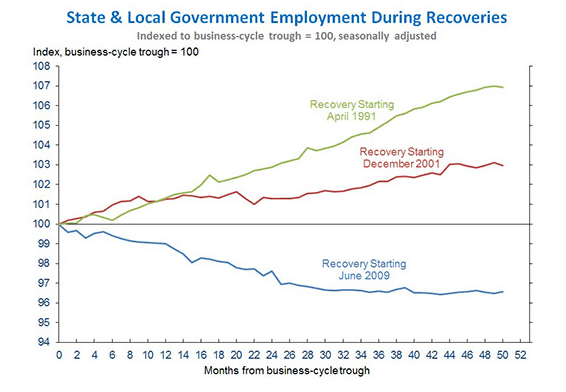 But it is not just direct government job cuts that are taking a toll. The New York Times reported on August 13, in “U.S. Cuts Take Increasing Toll on Job Growth,” call these cuts “a self-inflicted drag on the economy’s recovery.”

… the number of people who were working part time because they could not get their employers to give them full-time hours rose significantly. This probably reflects decisions by many government agencies to achieve their required budget cuts by forcing employees to take unpaid leave.

… In the private sector, employment at government contractors also appears to be falling as companies that do government research, provide custodial services and retrofit federal properties to be more energy-efficient, among other things, are informed of contract cancellations or delays in bids for new contracts …

Commenting on the effect of previous cuts, and the threat of more to come,

“Over all, fiscal drag has likely reduced growth this year at least 1.5 percentage points, and isn’t over yet,” Bank of America Merrill Lynch wrote to clients on Friday. “The last thing the economy needs is a repeat performance. A key part of our optimistic forecast for next year is that there is not a sustained shutdown this fall; the latest bickering leaves us a little more concerned.”

And just this Wednesday the Federal Reserve announced they are continuing the “quantitative easing” (QE) stimulus, because the economy is still hurting, the recovery not yet really taking hold – largely as a result of Republican-forced austerity cuts so far.

But Republicans are demanding that the government kill health care and take another several dozen billion dollars out of the economy anyway. Or face a complete shutdown.

Never mind what a government shutdown would do to the weak economy, the threat of a shutdown is harmful in itself. Companies are not sure what to expect, so they can’t hire or invest. Consumers don’t know if the government will go away or the economy will be thrown into chaos, so they hold back. And there is good reason to worry, as Salon reports in “Americans’ view on U.S. economy drops to one-year low.”

And never mind what a shutdown or threat of one does to the economy, Republicans are also threatening to make the country default on its debt obligations! This threat alone could cripple the recovery and the entire world economy. One must wonder if this is their intent.

So they threaten to shut down the economy over killing Obamacare, and then offer to let the government keep running if they accept this “continuing resolution” budget. It’s bait-and-switch. But the budget they offer might be worse in the long term than just letting them shut the government now until an enraged public and business community makes them fund it again.

Here is the misery trick: This bait-and-switch offer to keep the government running will raise unemployment, hurt businesses, cut the economy, harm families and could destroy the recovery.

Short-term Republican strategy: Hold the country hostage over Obamacare, then offer bait-and-switch budget resolution that harms much of what government does for We the People – in order to keep taxes lower for the 1 percent.

How Bad Is This Budget Proposal?

According to CAP, the speaker’s proposal is $70 billion below the Budget Control Act – sequester – level and the House budget resolution is $11 billion below that. But it would increase military spending $20 billion over sequester levels.

Just a few examples of cuts on top of the cuts already hitting the economy, according to CAP:

Along with these terrible cuts, the cuts in SNAP – “food stamps” – that passed the House today mean the country is cruelly stepping back from fighting hunger. This is obviously bad for people and families, the economy, grocery stores, farms, and the rest of those helped by this program. (Note that many people receiving food stamps work at low-wage outlets like Walmart, and the House could have cut as much or more of what government spends on this program by just increasing the minimum wage.)

Republicans claim all of these cuts are necessary because of government deficits and debt, but a report released this week by the National Priorities Project shows that the country is handing more than $1 trillion per year to the already-wealthy. (Please click through for details.) Meanwhile, economist Dean Baker points out this week that the deficit/debt problem is largely the result of tax cuts for the wealthy. Baker writes that “CBO is projecting higher debt levels 25 years from now … mostly due to ‘sharply reduced’ revenues going into government coffers” largely due to, “The American Taxpayer Relief Act of 2012 (which made permanent most of the Bush tax cuts and indexed the Alternative Minimum Tax to inflation).”

So all of this when spending is not a problem at all – we need investment in infrastructure and education so our economy can thrive in the future, and we need stimulus now to get people working. If you want to worry about deficit and debt, then tax cuts are the problem.