Iconic images are those that stand the test of time and become engraved in our psyche. They freeze a moment and tell a story. They create truths and inform our memories. For instance, the intense human rights struggle in Arizona has managed to produce several powerful iconic images for our times.

One image that many people will not soon forget is that of Gov. Jan Brewer wagging her finger at President Barack Obama at the tarmac as he deplaned in Phoenix. It was the ultimate symbol of disrespect.

In modern U.S. history, planting the flag at Iwo Jima qualifies as an iconic image that captured the spirit of World War Two. The shooting of John F. Kennedy in 1963 provided a few images, ranging from him being shot, to Jacqueline Kennedy crawling over the car seats, to 3-year-old JFK Jr. saluting during the funeral. The landing on the moon in 1969 provided similar images that are with us to this day. Tiananmen Square in 1989 provided us with an image of a young man stopping the progress of a column of tanks in China. In 2001, the attacks on the twin towers produced many searing images that to this day affect the nation’s psyche.

Iconic images are usually reserved for momentous occasions and as such, Arizona, the land of political extremism, is also beginning to produce similar imagery. Most people are familiar with the racial profiling SB 1070 state measure, a bill that has inspired copycat anti-immigrant legislation nationwide. The image of Brewer wagging her finger is related to SB 1070. The Supreme Court recently turned thumbs down on three of four measures before the court, while not striking down the 4th, section 2(B), the one provision that requires law enforcement officials to question the immigration status of people they have lawfully detained or arrested and whom they deem to be “reasonably suspect.” Despite this, this provision is not yet in effect.

While SB 1070 expressly prohibits racial profiling, many law enforcement officials are convinced that this provision cannot be implemented without racial profiling. Throughout the country, when one invokes the concept of reasonable suspicion in the context of immigration enforcement, chances are that brown skin and the use of the Spanish language comes to mind. Ironically, an image unrelated to SB 1070, actually highlights this very concept of “reasonable suspicion,” Arizona style. 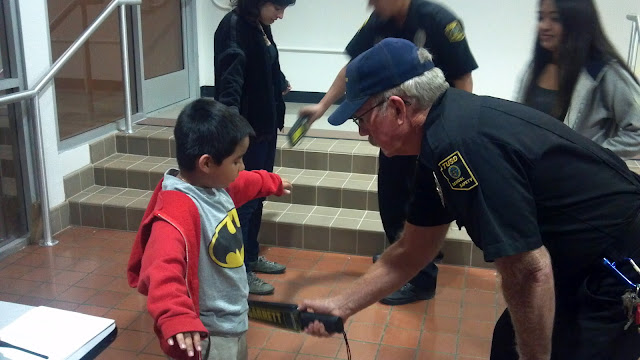 The photo is that of a child being subjected to a metal detector in the spring of 2012 at the entrance of a school board meeting in Tucson.

Here, controversy has swirled regarding the anti-Ethnic Studies HB 2281. That this child would be considered potentially dangerous tells us that either common sense has left Arizona, or this officer believes that this child is capable of bringing in a weapon, and thus, “Reasonably suspicious.”

If this child can be considered a danger at a school board meeting, what can we expect out on the streets? If the SB 1070 2(b) provision survives the courts, all law enforcement officers will be required to make a decision everytime they make a lawful stop as to who constitutes a “reasonable suspect.”

In the realm of theory, no citizen or lawful resident will be inconvenienced, nor will anyone’s civil rights be violated. Yet, the concept of “driving while Black or Brown” is a reality of life and a good indication that regardless of intent, the historic experience of brown people with immigration authorities informs us that racial profiling has always been practiced.

In Arizona, brown skin and the Spanish language constitute reasonable suspicion. People of color nationwide understand this. And yet amazingly, those who are not subject to racial profiling, insist that this dehumanizing phenomenon does not exist. Or they insist that as long as the effort is aimed at capturing criminals or people who don’t belong in this country, then that is but a minor inconvenience.

It is true that Arizona is a little different than the rest of the country; here SB 1070 targets the body, whereas HB 2281 targets the mind. HB 2281 criminalizes thinking and the teaching of Mexican-American history and culture and it, in effect, outlaws the teaching of an indigenous worldview.

Some 20 riot-equipped officers arrest elder Lupe Castillo at May 3, 2011 Tucson School Board meeting for reading MLK’s “Letter from Birmingham”

Truly, Arizona is burning and has become the new South (the Old South on these matters remains the Old South). Its politicians are determined to keep it in the 19th century. Contrarily, freedom riders have been converging on Arizona all summer to extinguish the fires of hatred and dehumanization, determined, once and for all, to bury the concept of “reasonable suspects.”

Young Tucson High School student tossed in air by Tucson police officer at May 3 Tucson School Board meeting. No investigation has been conducted or made public regarding the massive police presence that night.

For information regarding Tucson’s Freedom Summer, go to: Tucsonfreedomsummer.com.