In the swirl of campaign driven talk of an “end to the era of mass incarceration,” it is crucial to consider again: What exactly does this mean? How could it possibly be achieved?

The sound bytes are easy, and appealing to anyone who is appalled by our excessive and extreme reliance on policing and punishment. We know the statistics: 5% of the world’s population and 25% of its prisoners. 2.4 million people in prison or jail; another 5 million under other correctional supervision. Stunning race and class gulfs at every stage of the system from police killings to imprisonment. It has long been an egregious state of affairs.

But the challenges faced in dismantling nation on lock down policies are daunting. Beyond the difficulty of converting political rhetoric into any sort of legislation action, there is the sheer reality of numbers, of focus and yes, of profit.

To see more stories like this, visit “Smoke and Mirrors: Inside the New ‘Bipartisan Prison Reform’ Agenda.”

As you consider the claims and calls for “reform,” remember…

Mass Incarceration Is Primarily Driven by State and Local Practices

While incarceration at the federal level has increased at a rapid pace, the overwhelming number of prisoners are housed in state prisons and local jails. Any real dent in the numbers can only be attained by changing policy and practices here. Mass Incarceration: The Whole Pie A Prison Policy Initiative briefing by Peter Wagner and Leah Sakala offers us a stark reminder. 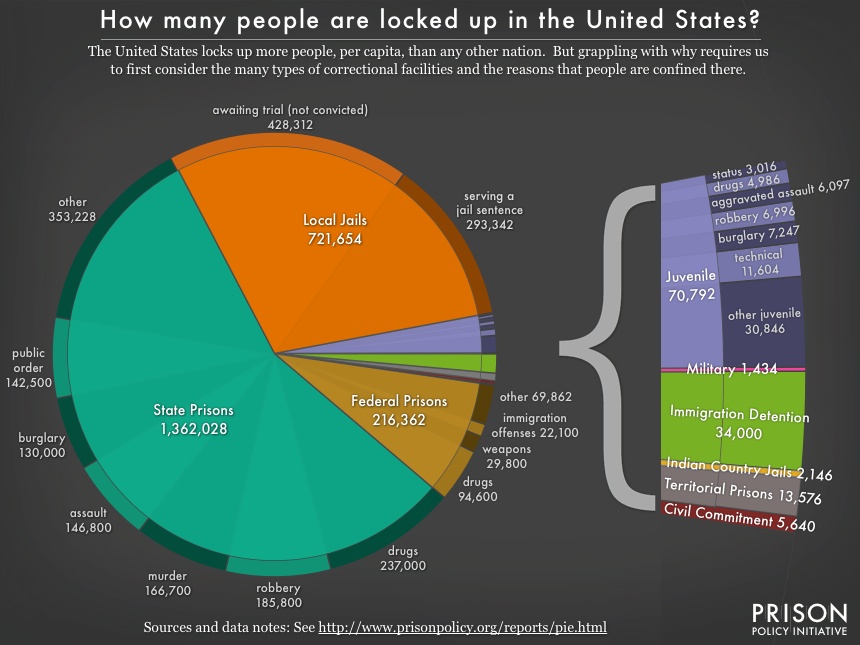 The proposed reforms that are most widely touted have implications for the federal level alone, and beyond that, are focused on reentry options and criminal records. Despite the obvious benefits to those immediately affected, this legislation would have a negligible impact on overall incarcerations rates.

In addition to a focus on the federal level, most reforms efforts center on ending the War on Drugs and the harsh mandatory minimums for nonviolent offenders. A new interactive tool from the Urban Institute, The Prison Population Forecaster, illustrates the need for a wide range of efforts. Using data from 15 states as an example, this tool shows the impact of various including fewer admissions to prison, shorter sentences, and various offense categories. The graphs below reveal a need for a much broader set of reforms than have currently been discussed. 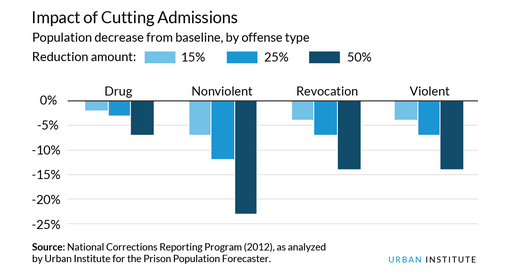 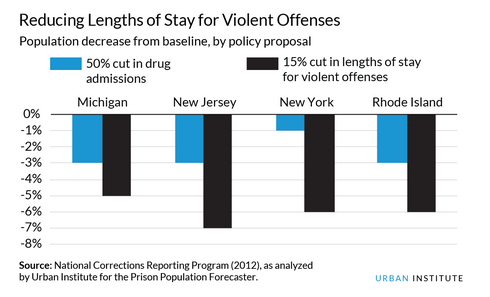 The focus cannot be on drug crimes alone or less prison time for nonviolent offenses or reduced revocations of probation/parole. The charts show that any real effort to reduce our reliance on prisons must also imagine alternatives for violent offenses. To date, this level of discussion has been consider completely out of bounds. In fact, much of the current “reform” discussion further demonizes those convicted of violent crimes and draws a brighter line between “nonviolent offenders” who might be spared imprisonment and those assumed to require it. Unless a broader cultural shift about the efficacy of prison for anyone ensues, the numbers cannot be substantially reduced.

The Smoke and Mirrors of “Reform,” or Follow the Money

Perhaps most insidious is the possibility that proposed “reform” isn’t meant to end mass incarceration at all, but rather create an opportunity for expanded profiteering in reentry services, probation, jails, policing, and mental health wings in existing prisons and jails. Kay Whitlock and I have written much about in the Truthout series: Smoke and Mirrors: Inside the New “Bipartisan Prison Reform” Agenda. I encourage you to take a closer look.

It is not called the prison industrial complex for nothing. After more than 30 years of expansion and entrenchment, it is difficult to map all the never ending sources of profit and economic growth in jobs, products and services. It is difficult to imagine, too, any political commitment to the nearly complete overhaul of our late capitalist post-industrial service sector economy that decarceration would fully entail.

A recent New York Times piece, Prison Vendors See Continued Signs of a Captive Market, indicates that the profiteers aren’t worried about the current calls for “reform.” The products keep flowing – both for restraint and punishment and now too towards servicing mental health and reentry facilities with colorful vinyl furniture. In cheerful lime and mango.

In a blog post discussing the New York Times piece, Peter Wagner of the Prison Policy Initative asks us to consider “two important questions that long-time prison reformers should be grappling with:

Ask we must. And perhaps the answer will point us – not towards reform – but instead, towards abolition. As Angela Davis observed over a decade ago:

“The most difficult and urgent challenge of today is that of creatively exploring new terrains of justice, where the prison no longer serves as our major anchor.”